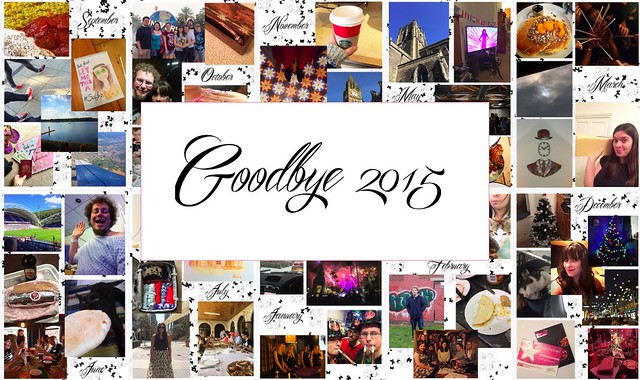 So now comes the close of another year and therefore its time to look back and reflect. Its amazing how much you forget happened over the year so I find doing this quite therapeutic. Putting the year to bed allows me to look ahead and concentrate on what’s to come. So here’s what happened to me this year. 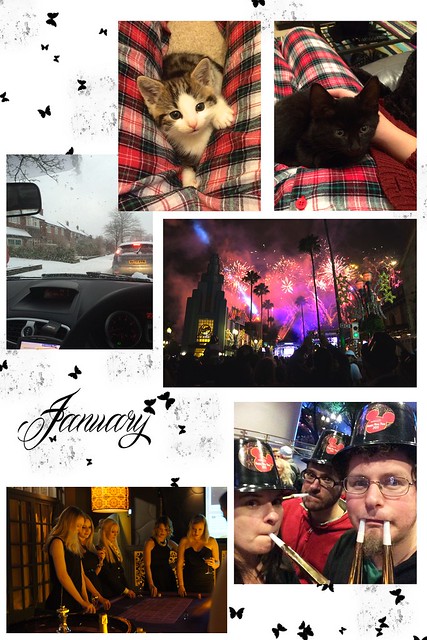 Starting the New Year in Florida at what appears to practically be our second home. Obligatory fireworks of course. This was the month where we adopted our beloved fur babies Pickles (tabby shorthair) and Luna (black shorthair) and chaos ensued! Other events included Thomson’s Vegas night and getting stuck in a hell of a lot of snow. The 10 minute commute to work turning into 2 hours. I now know how to drive on ice! 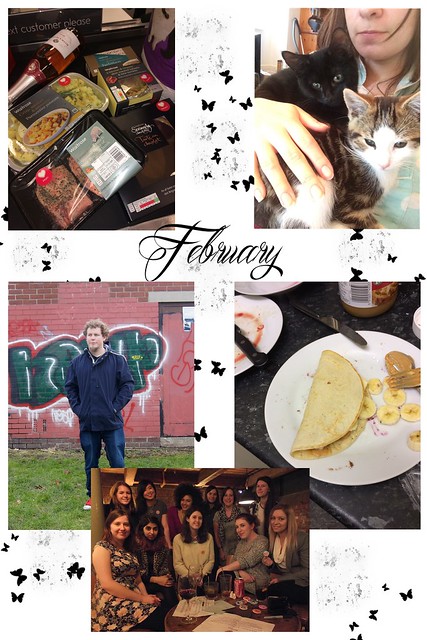 Another chilly month that I spent the majority of being unable to move due to Pickles and Luna taking turns sitting on my chest. And sometimes they shared. Topher and I celebrated the holidays – Pancake day and Valentines Day respectively. Unusually we actually did something for V-day this year – mainly due to Waitrose having a rather nice meal offer on! Other points of note – Topher became a part time model *snorts and I attended a blogger meet up in the Northern Quarter. 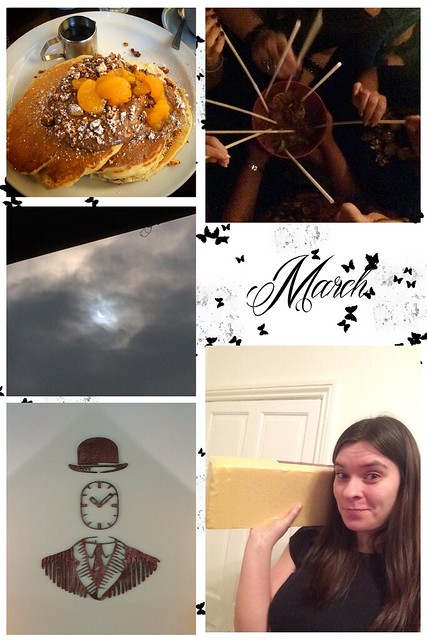 In March I visited Moose’s and Ziferblat which I need to revisit sometime soon. I also failed taking decent photos of the lunar eclipse and earned my first cold in 5 years after going on a work night out. Do not share a giant bucket of booze where the straws all look the same…ergh. And finally I had an adventure in the land of Costco where I came home with the largest slab of cheese I’ve ever purchased. Crazy times. 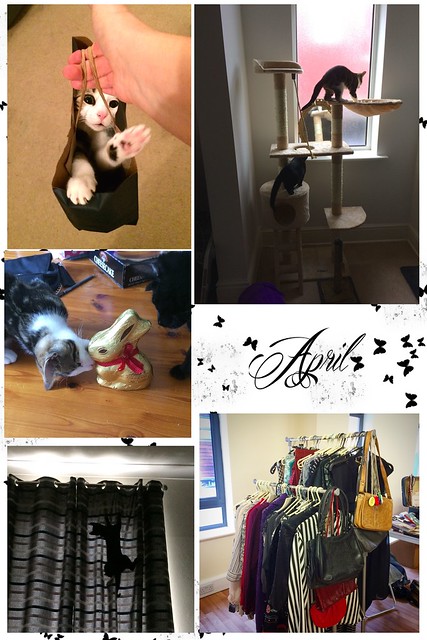 Lots of cat antics this month. Luna learned to climb the curtains so we got them a cat tree to climb instead. They both discovered the wondrous world of bags and we celebrated Easter with chocolate bunnies from Lindor. I also took part in the bloggers market to destash some of my stuff. Mission accomplished. 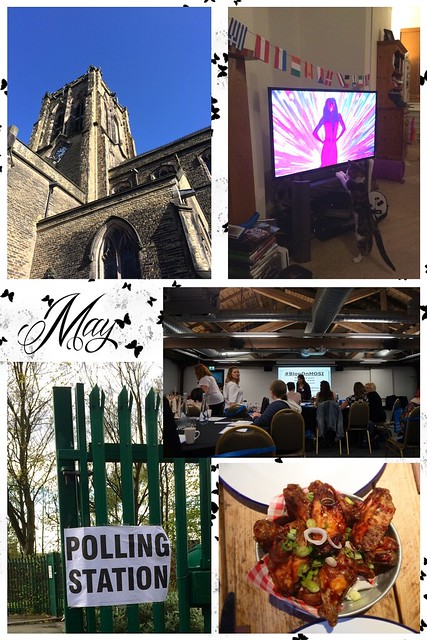 May brought the sunshine that we especially enjoyed on the first bank holiday weekend that we were doing a car boot at a church. It also brought the Blog on Mosi conference that I attended. Interesting experience but it was very mummy blogger targeted which obviously I am not – did learn a thing or two though. Voting day came and went and I did my bit. Topher took me to Hale on a date night where we had some pretty damn tasty chicken wings! And of course a highlight of the month was Eurovision. We went all out, making bunting and themed food and cocktails which our friends really appreciated. And Pickles appeared to enjoy it too! 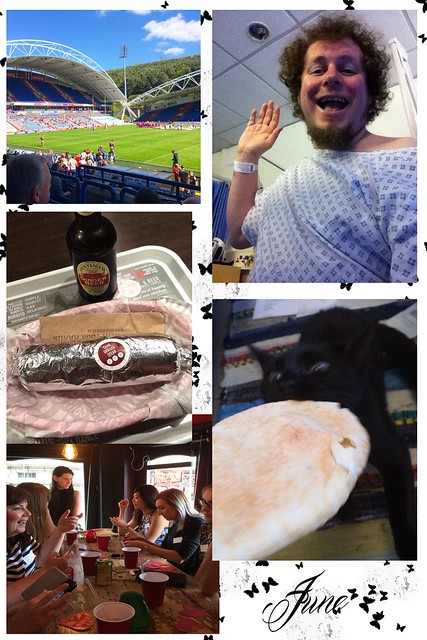 I attended my first rugby match with the girls from work and we attempted to follow the game! Luna developed a love for stealing food and I attended a blog event at the end of the month where there was chat and interesting pizza. Of course June is my birthday month which ended up being the weirdest birthday ever in which Topher had surgery and I had a burrito with his mum. 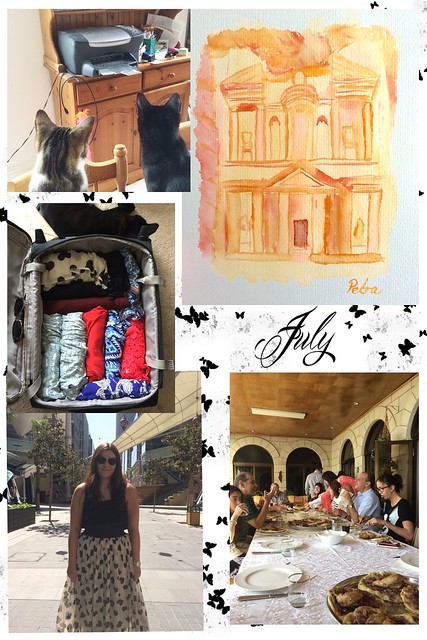 July was mainly dominated by my annual trip to Jordan where I managed to pack for 10 days using only hand luggage. Winning. This was also a tough month in the run up to my holiday for my mental health. Due to a combination of a trapped nerve and repetitive strain, I have been having a lot of problems with my hands, arms and shoulders this year and this was the month that I experienced a bout of anxiety about it. Panic attacks at work and horrible pain in my shoulder and neck made me so thankful for my holiday where I could get some rest. This was also the month I finally got my hands on some watercolours and there was no stopping me. Why didn’t I do this years ago? In other news, the kittens discovered the printer. 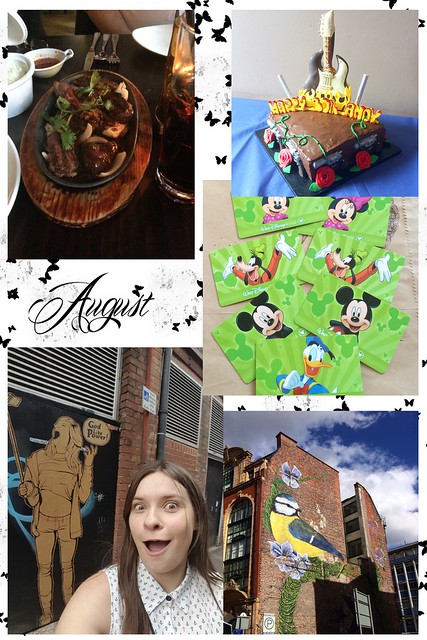 I don’t know what it is about August 1st but everyone seems to have a birthday on it. We went to two parties in one day on the first of the month. As well as going on a blogger photography class with 3, this was also known as the month of anticipation and preparation for my friends and I’s upcoming trip to Florida. The tickets arrived! 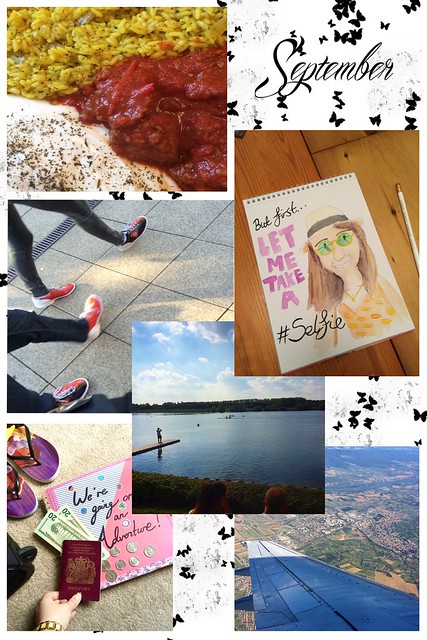 While we waited for our holiday to begin at the end of the month, I kept busy. Learned a new curry recipe courtesy of the latest Slimming World magazine. Beef curry, turmeric rice and mint yoghurt. Divine! I also travelled down to Milton Keynes to visit my cousin as well as having her and my brother come and stay with me in Manchester where we all managed to forget we were wearing bowling shoes. Well, a family that wears bowling shoes together and all that! And of course there was painting. 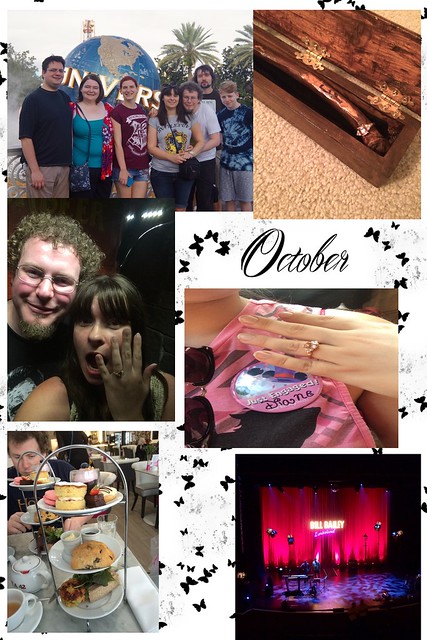 Now where do I start with this month? I think this was definitely the best month by far. A holiday of a lifetime where I got engaged to the love of my life, seeing Bill Bailey for the third time and managing to squeeze in a spot of afternoon tea! Also, I drove in America for the second time in the biggest car I have ever driven – a seven seater. And it all went fine! The trip was a complete success and everyone had a great time. Click here to see the music video I made of the trip. 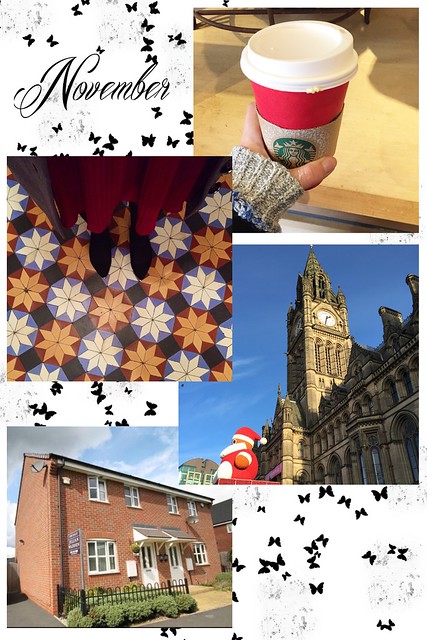 Now of course when there are ups, there are sure to be downs – such is life. This month we lost Topher’s 49 year old step dad to heart disease. Words cannot describe how bad I feel for his wife, sons, family and friends. A month later it is still raw for many, but fingers crossed 2016 comes better times. Other things that happened this month were that Topher and I rejoined Slimming World, we visited the Christmas markets and got an offer accepted on a house. Paperwork is currently going through but it all looks good and we hope to be in by Spring 2016. 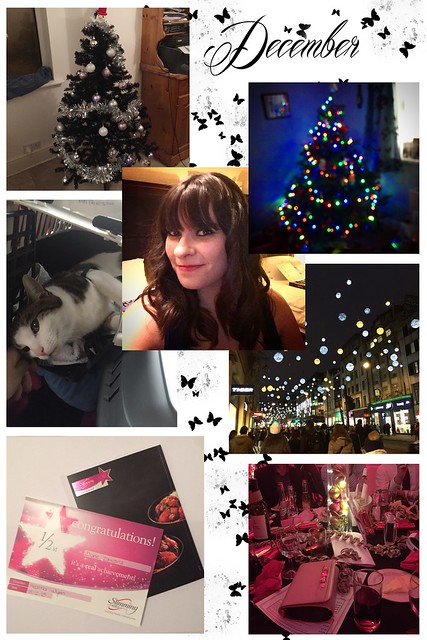 The final month of the year saw lots of holiday parties and birthday parties of course. I had my work do where I got dolled up and Topher had his birthday where practically everyone turned up over the course of a day in town. I had a day down in London to see some family including my cousin who I hadn’t seen for almost two years and by some miracle Topher and I still managed to lose weight. I got my half stone award and Topher got his stone award. Our tree went up, then down after the cats tried to eat it and at work I was made redundant. All I can say about the redundancy is that it was a relief after all the trouble I’ve been having with my health because of it. I need to find something different now. In other news, after some dithering, I decided to take my mum up on the offer to drive me and the cats home for Christmas. Once they were in the car it was surprisingly easy!

So that was my year. Hectic at times and lots of milestones and non milestones reached but I wouldn’t have it any other way. Goodbye 2015, happy new year and here’s to 2016. I will be celebrating with Topher at a friends house party. Hope you have a good night!