Another year over! Wow that was fast. But so much has changed this year. Time for my 2016 in review! 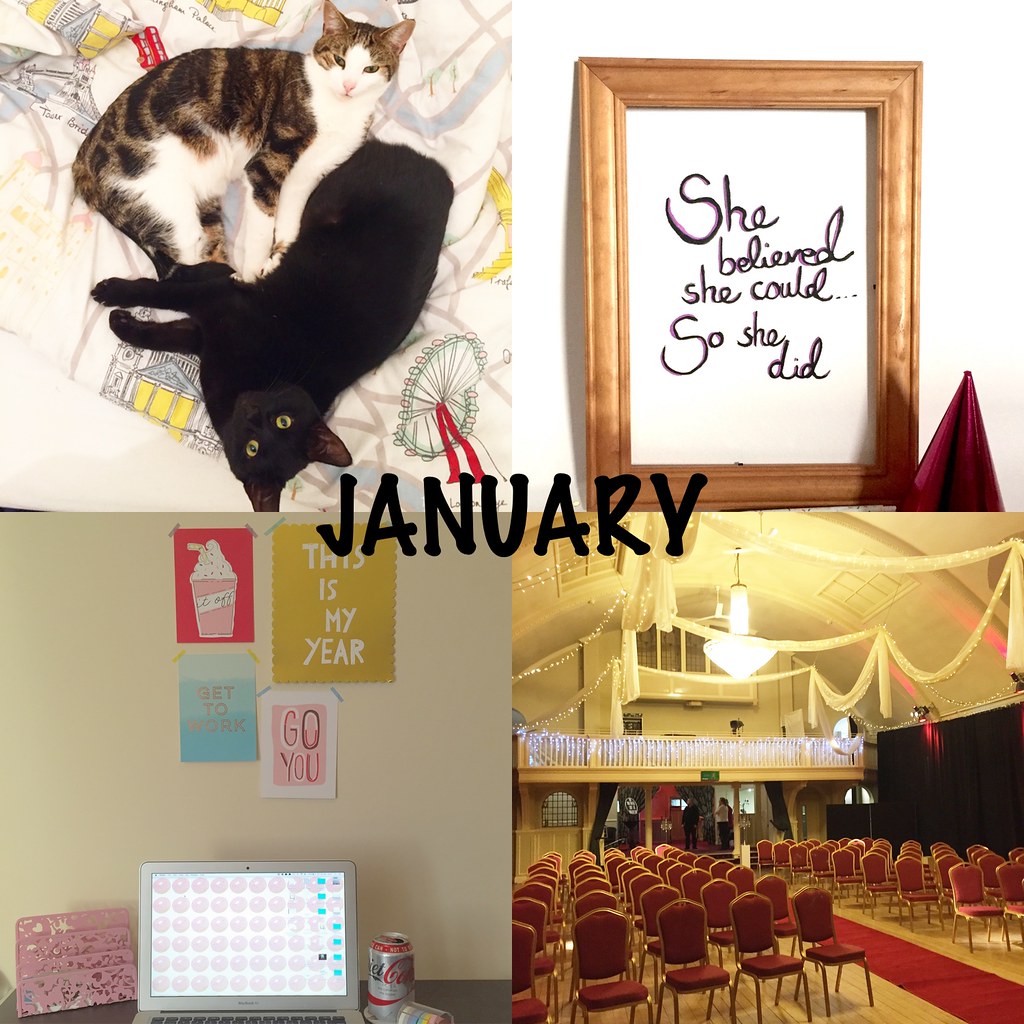 This was the month were I officially went self-employed. It was scary but I managed to secure my first client and I was away. We celebrated 1 year with the cats and we also got wedding planning off on the right foot by finding both our venue and our photographer. There was also lots of walking! 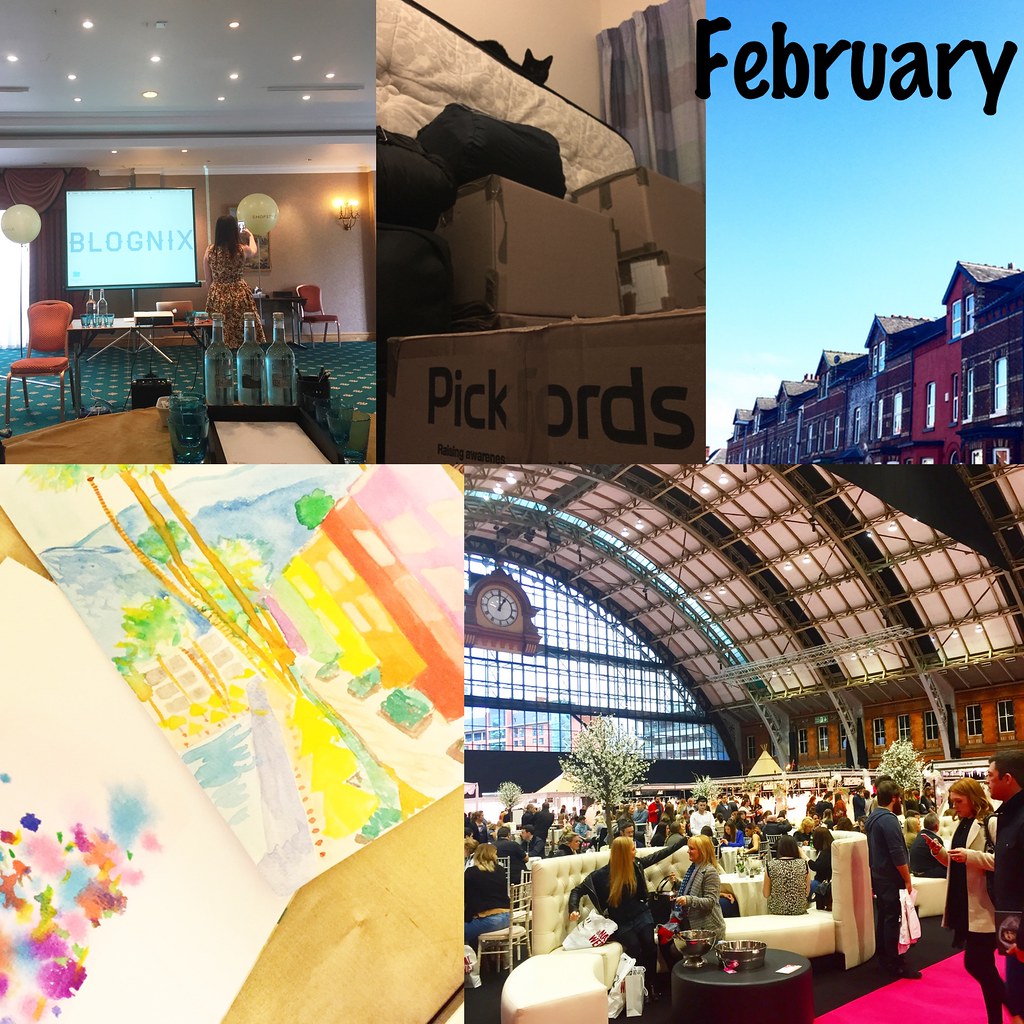 Along with painting and painstakingly calling our solicitors daily about the house purchase, I spent a lot of the month packing in preparation for whenever our move would be. It was getting a bit scary since our rental contract was up at the beginning of March. Luckily we were handed the keys on the 29th. Phew! Just before the end of the month I travelled down south to attend the Blognix Retreat which was amazing. I also attended my first wedding fair this month and tried on a wedding dress for the first time! 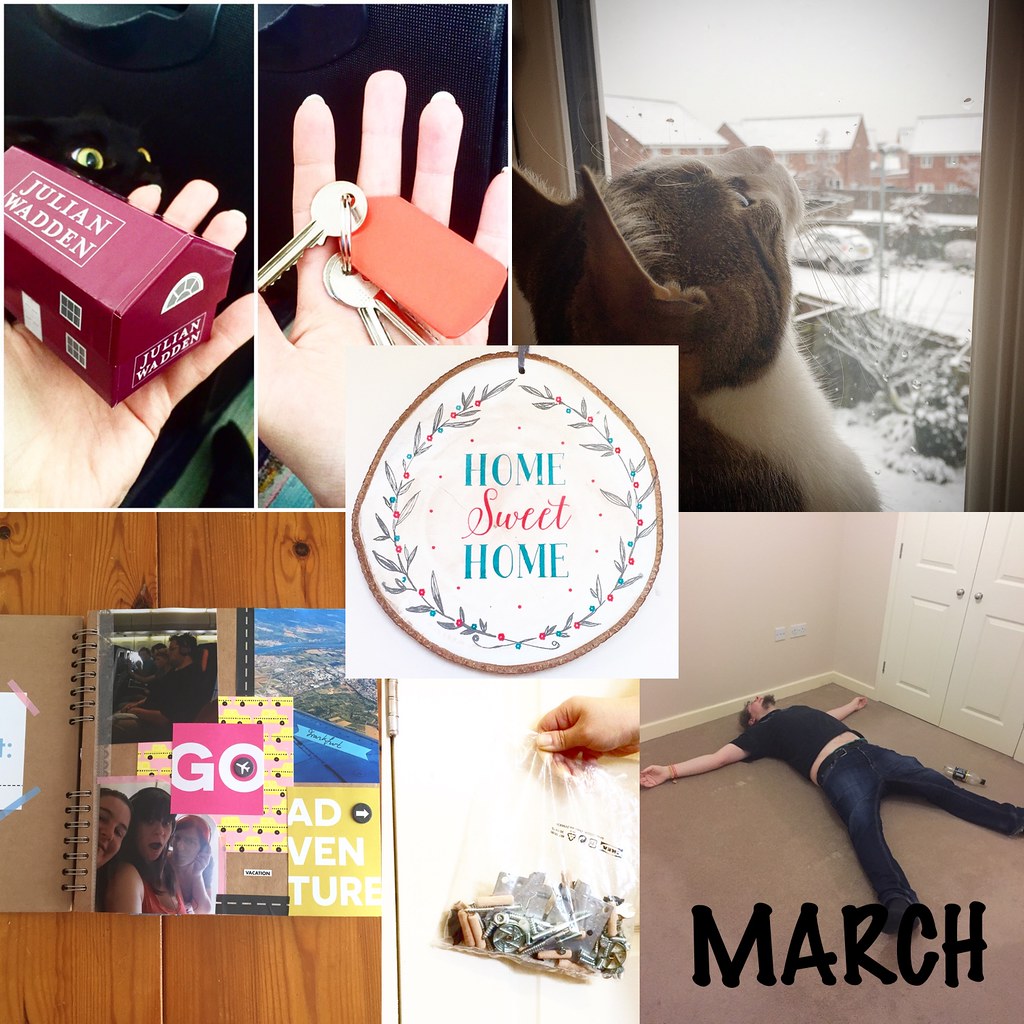 After getting the keys on the last day of February, we were all set to move in on the 1st March. Just in time. I rented the biggest van I’ve ever driven (the thing was a monster!) and surprisingly drove it with no problems whatsoever! If you had told me I’d be able to do that 10 years ago, I would have laughed. So the rest of the month was spent unpacking and practically living in IKEA. I did find the opportunity to start my Florida scrapbook though. We also joined a local Slimming World which is to be our permanent one now. Oh and SNOW! 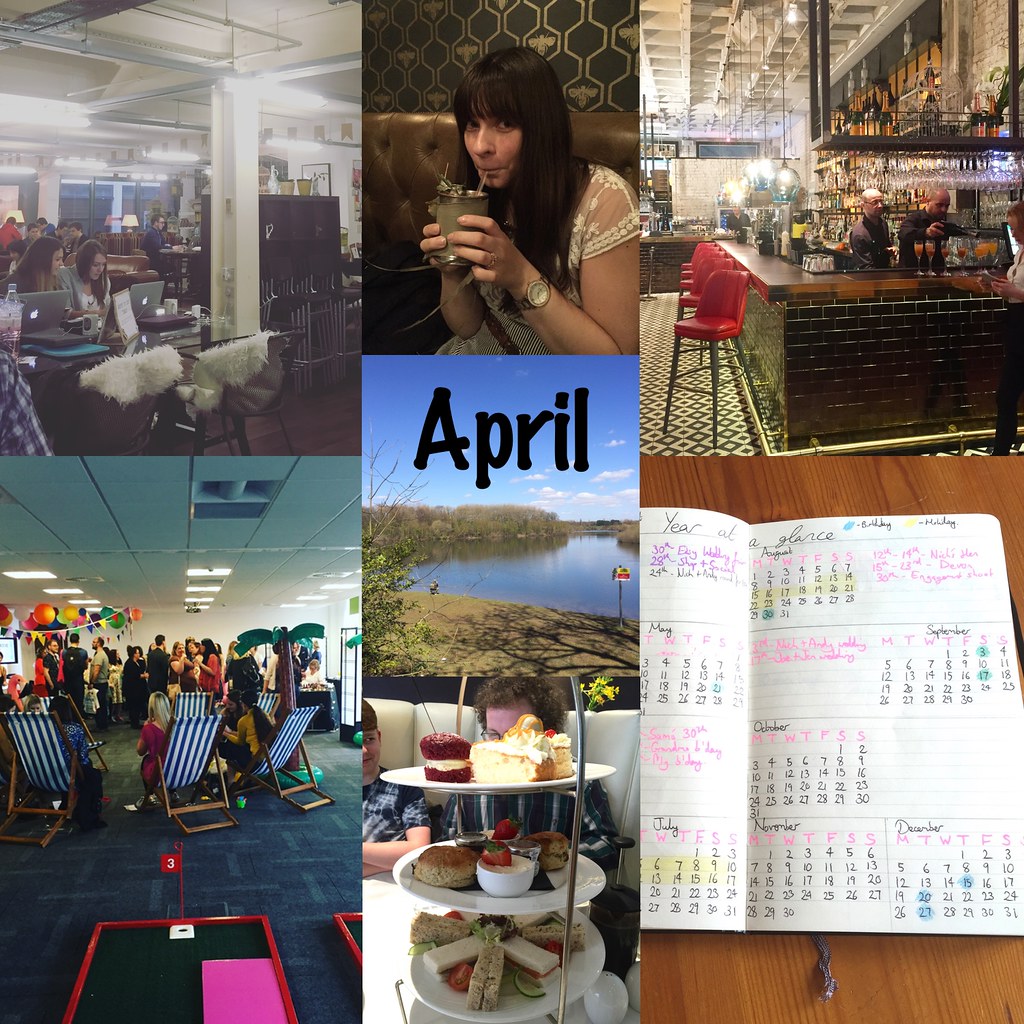 On the 1st April I wandered into an event called Freelance Friday which I had no idea was going to be such a game changer for me. Oh and speaking of game changers, I started using a bullet journal which is just plain awesome. I went to a couple of blogger events and there was also lots of food and drink times had. Completely settled into our new home we started wandering round the area and found a lovely park and reservoir which I will definitely be revisiting once the weather gets a bit warmer. 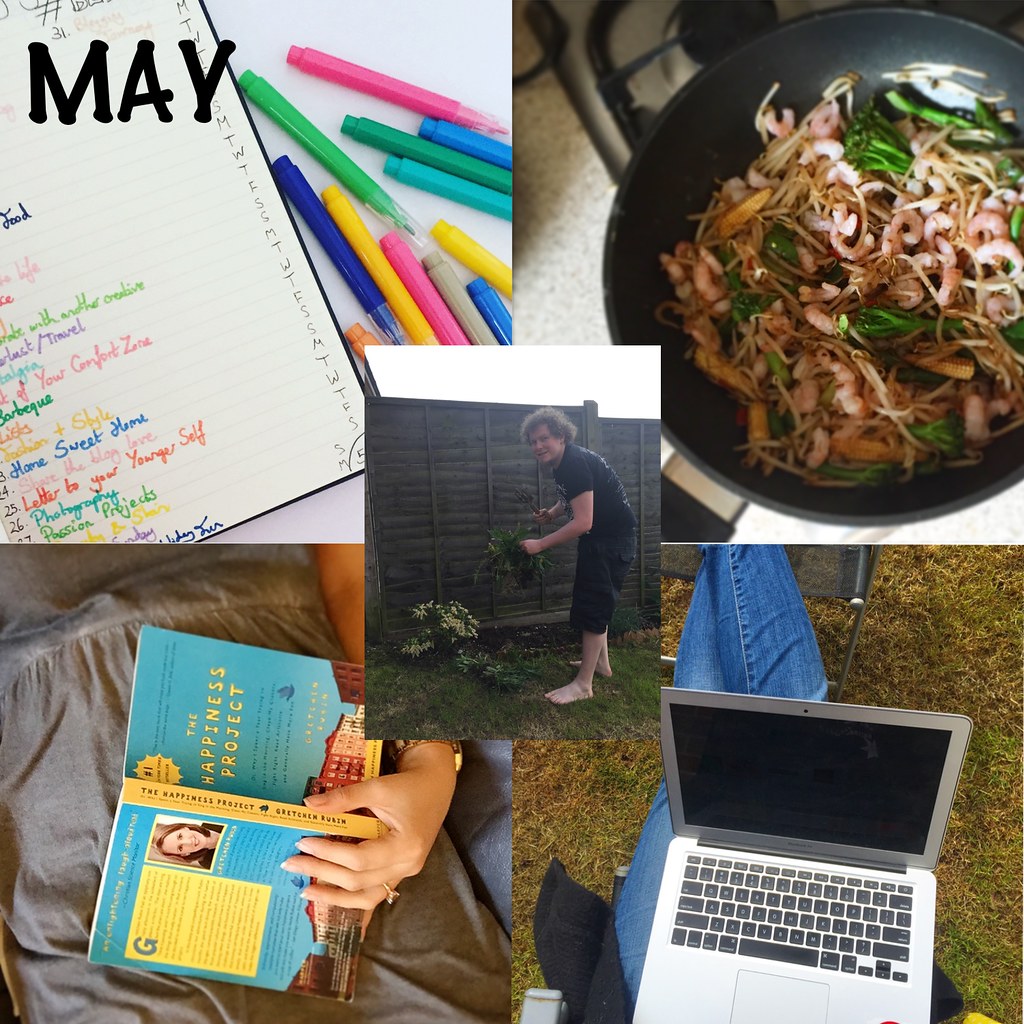 The weather got warm so Topher and I got ourselves out into the garden to start weeding and I got a little bit of work done too. It’s the first time we’ve had our own garden so it’s pretty exciting. I took part in #BEDM and got lots of reading and cooking done. 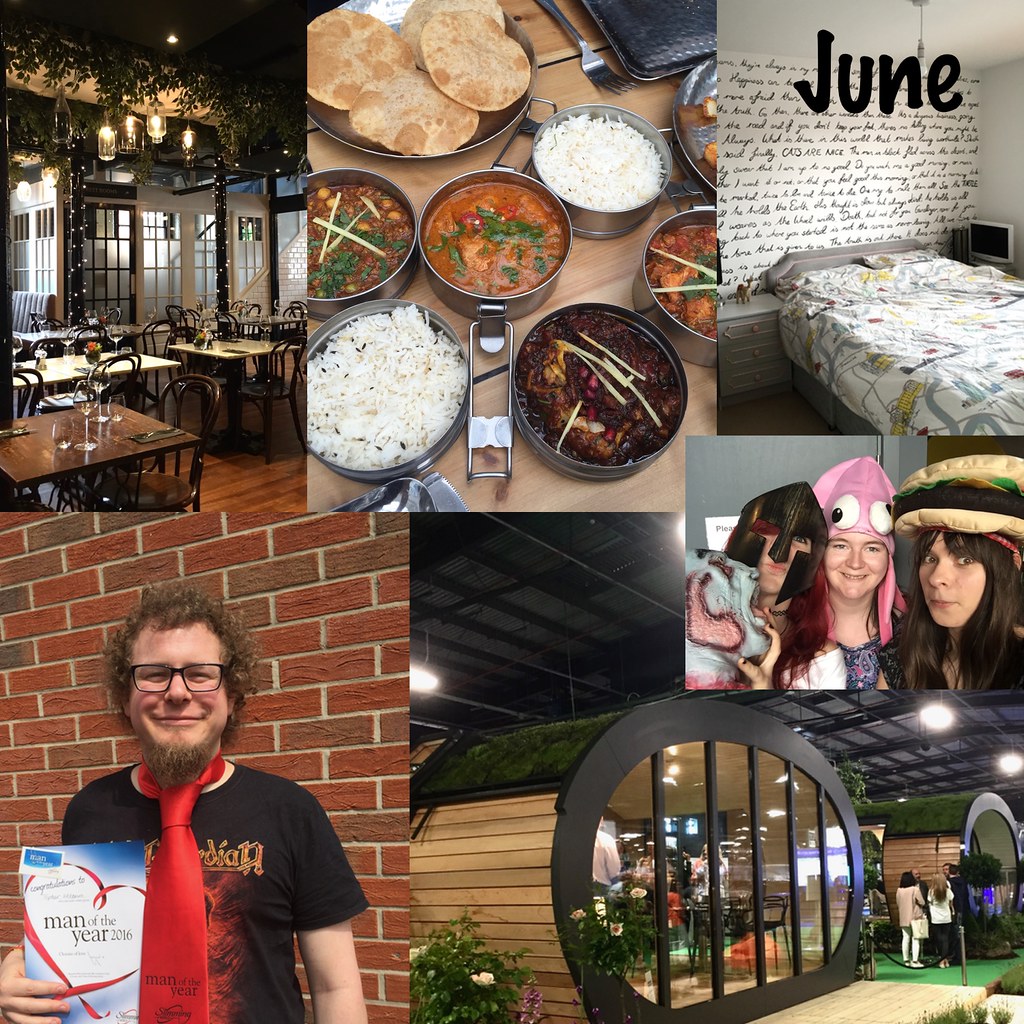 My birthday month! I turned 28 in style, with afternoon tea, films and a jaunt to the Escape Rooms. Topher and I also discovered Mowgli which I still can’t get enough of. I finally got to give into my decorating urges and I painted the guest room and we bought bookcases to house Topher’s huge collection. I’m really proud of the quote wall I did. Also this month, Topher won man of the year at our Slimming World group and we went to the Ideal Home Show. 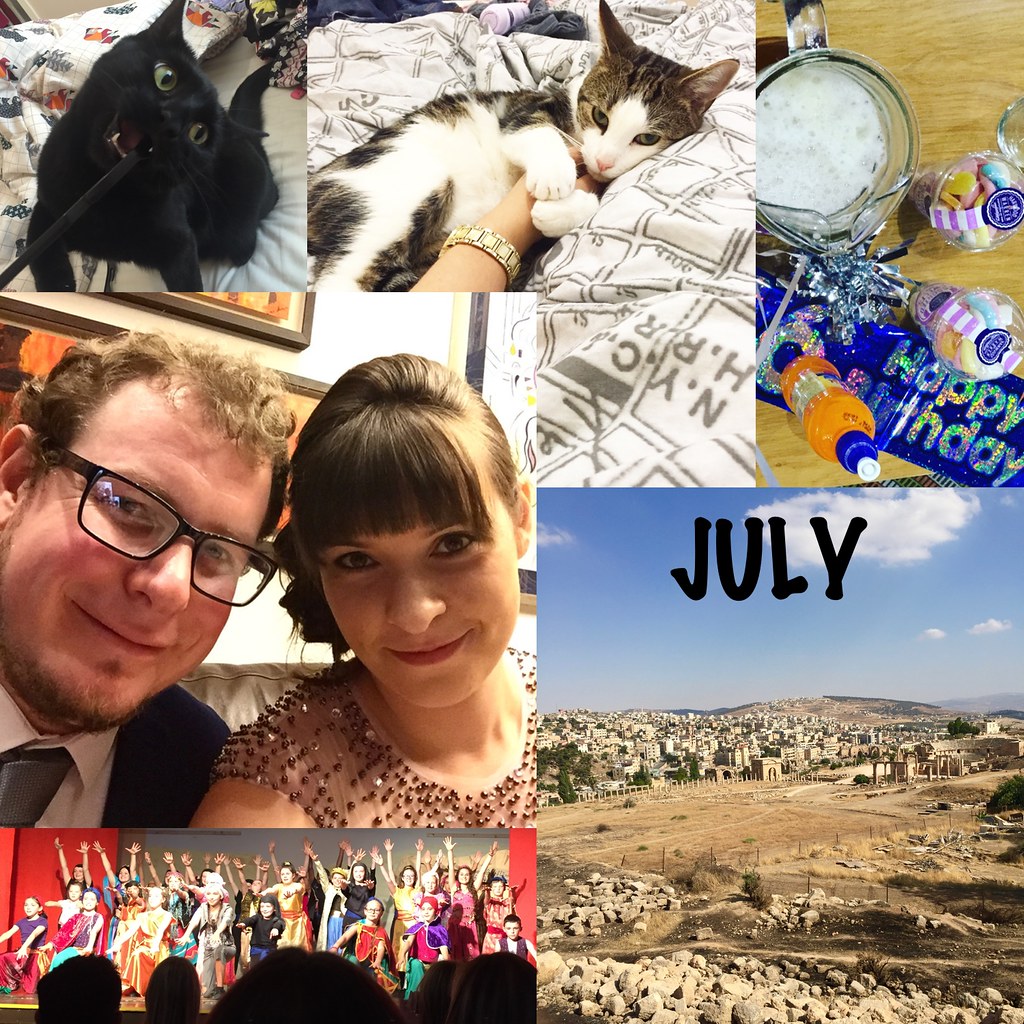 This is a month to store in my memory forever – Topher came to Jordan with me! I’m so happy he finally came even though the whole concept terrified him and even better that he had an amazing time and my family all loved him. We had a beautiful engagement party that was so incredible and so fun that I’ll remember it forever! Back in the UK we celebrated Topher’s step brother Adam’s 16th birthday and also went to see him in a play for his drama group. The cats were their usual awesome selves and behaved themselves while Emma house sat for us! 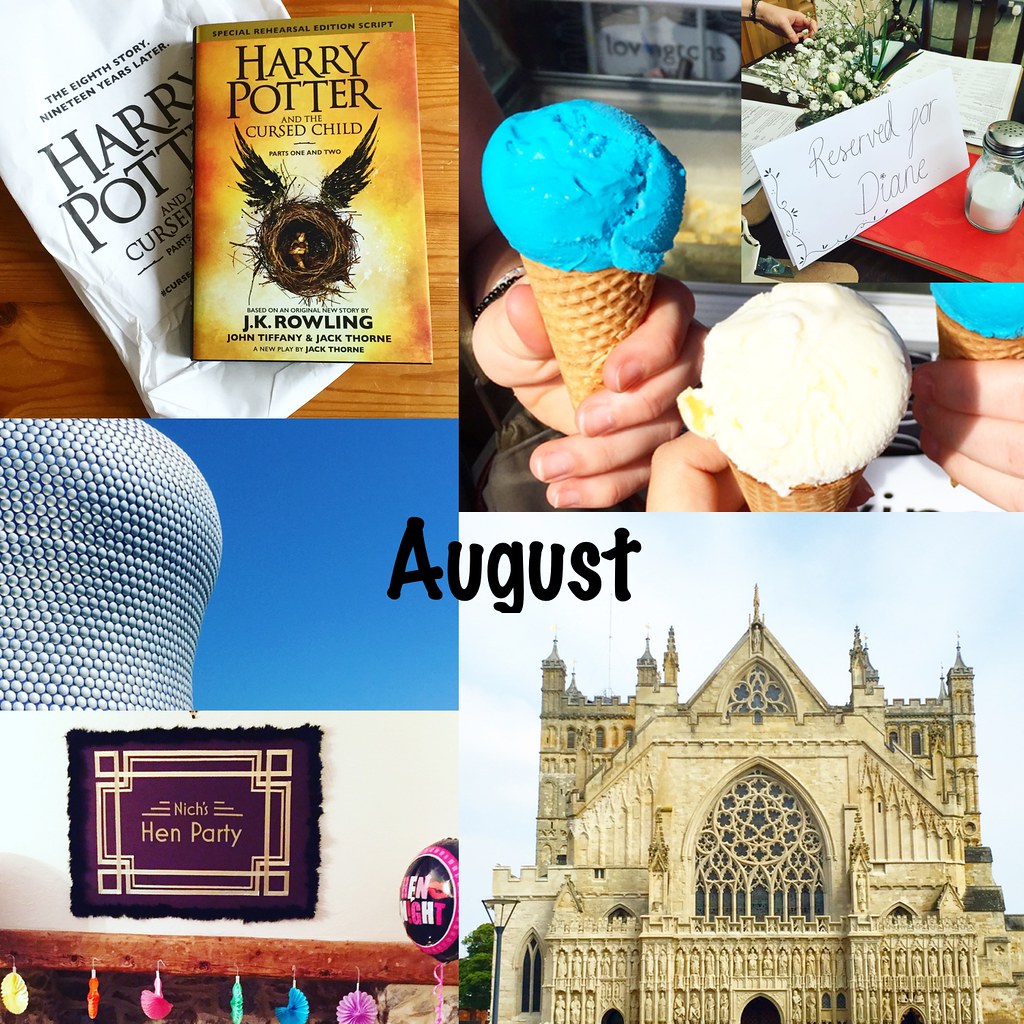 Now this was a busy month! I went to one of my uni friends Nich’s hen party which was hands down the best one I’ve ever been to, then immediately drove down to Devon with Emma (picking up Topher along the way from Bloodstock) to visit their family. I also met Topher’s dad for the first time – and his little half sister. It was a great trip! I also started wedding dress hunting with Emma, Claire and my mum and I bought and read the new Harry Potter book. Interesting… Finally at the end of the month, Topher and I popped down to Birmingham for an engagement shoot with our photographer. 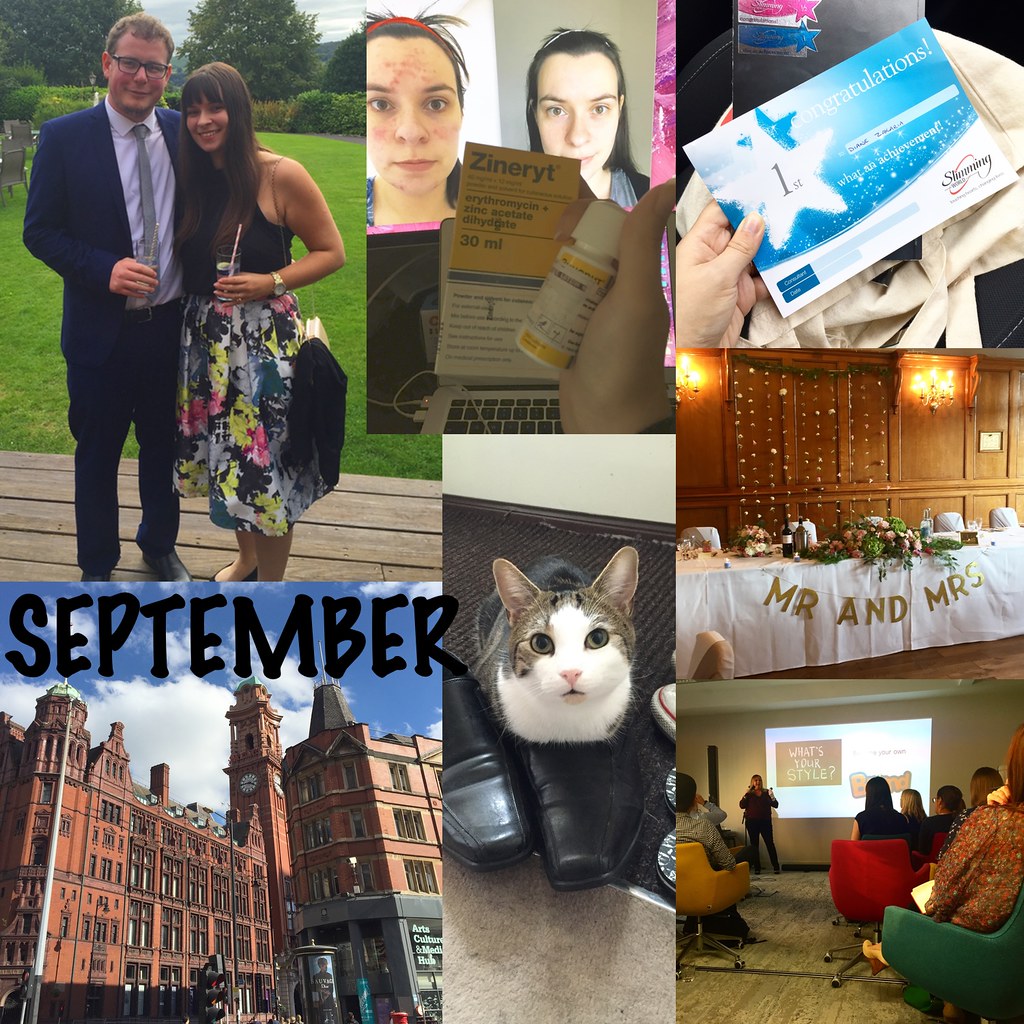 The many weddings began (we have 5 before our own – 2 down, 3 to go) this month, starting with Nich and Andy’s then Topher’s school friend Joe and Jen’s. We were taking notes! The cool thing was that because it was different groups, we wore the same outfits for both. Score. September also saw me reaching my 10 year anniversary since I first moved to Manchester – crazy! And I attended a freelancers conference called Freelance-a-lot which was really fun. In health news, I got my 1 stone award at Slimming World and I finally sorted out my acne. I actually went to the doctors at the end of July but this was the month that the results were amazing and my acne had almost completely disappeared. 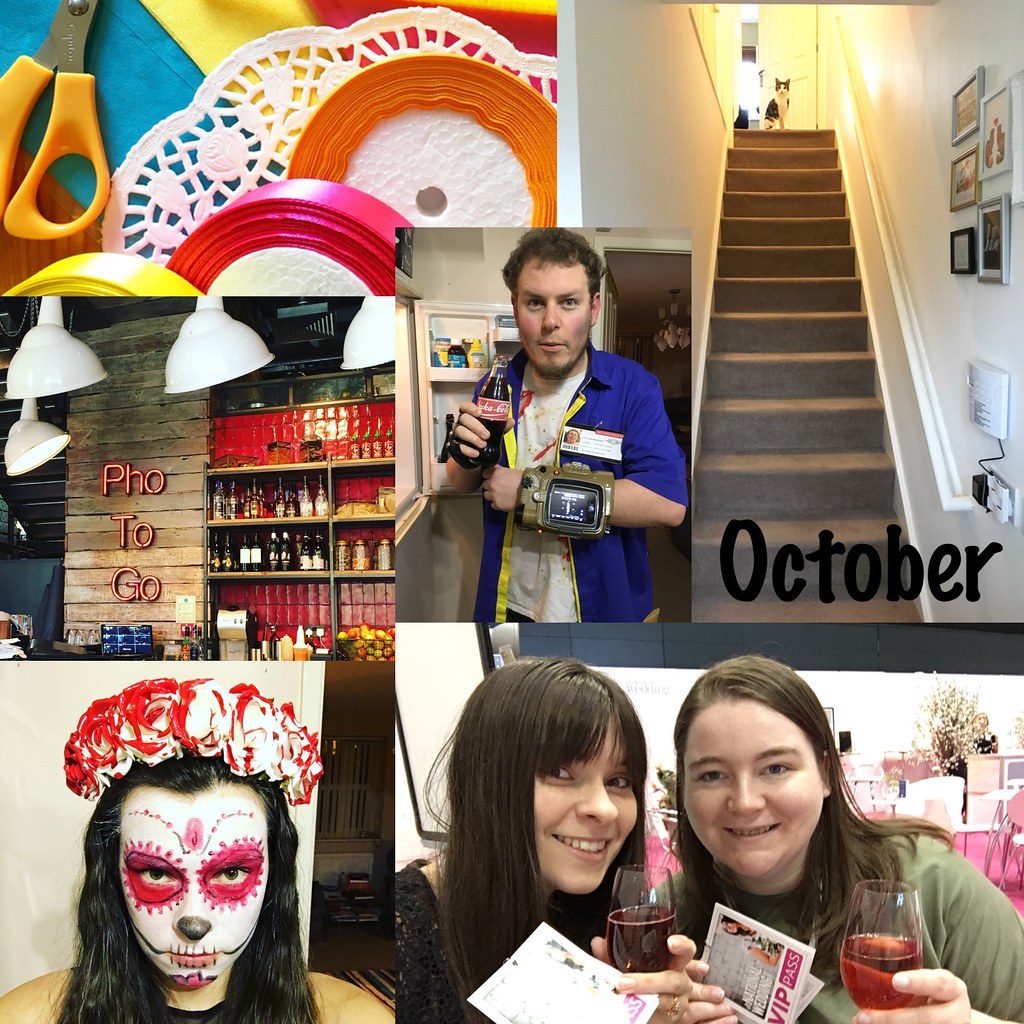 October was when I got my wedding craft on! And I went to a couple more wedding fairs, including one where Claire and I got VIP tickets. Topher and I went to Pho to celebrate one year of being engaged and I got my paint brush out again to makeover the landing. Goodbye stripy wallpaper! At the end of the month we threw our first ever Halloween party. It went great and I tried out face paint for the first time ever. 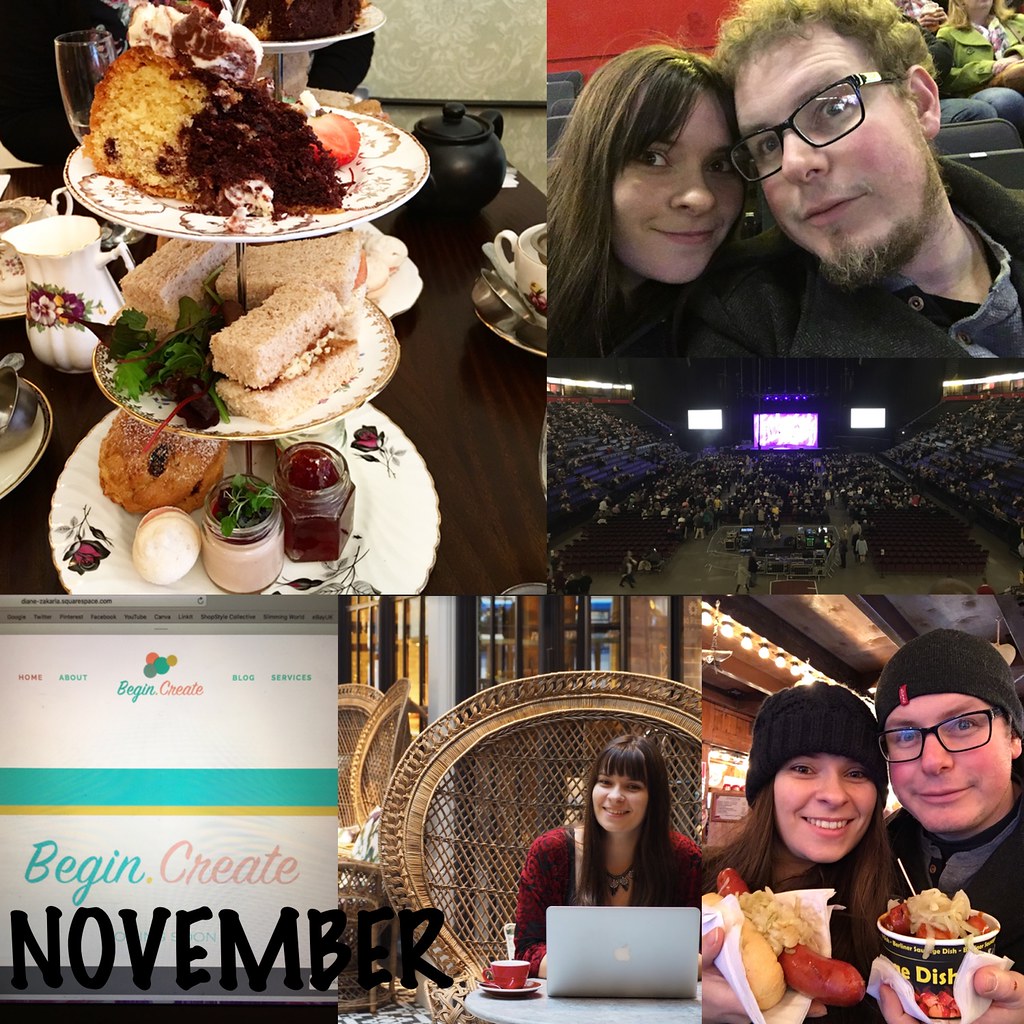 This month started off great with me finding my wedding dress! So excited! Of course I can’t show a picture but there’s a picture of the afternoon tea that my parents and I enjoyed that same day. Topher and I went to see Billy Connolly which was amazing – definitely another thing ticked off the bucket list. And we went early to the Christmas markets where I found a beef hotdog! November was also when I launched Begin.Create and got some photos done. Exciting times! 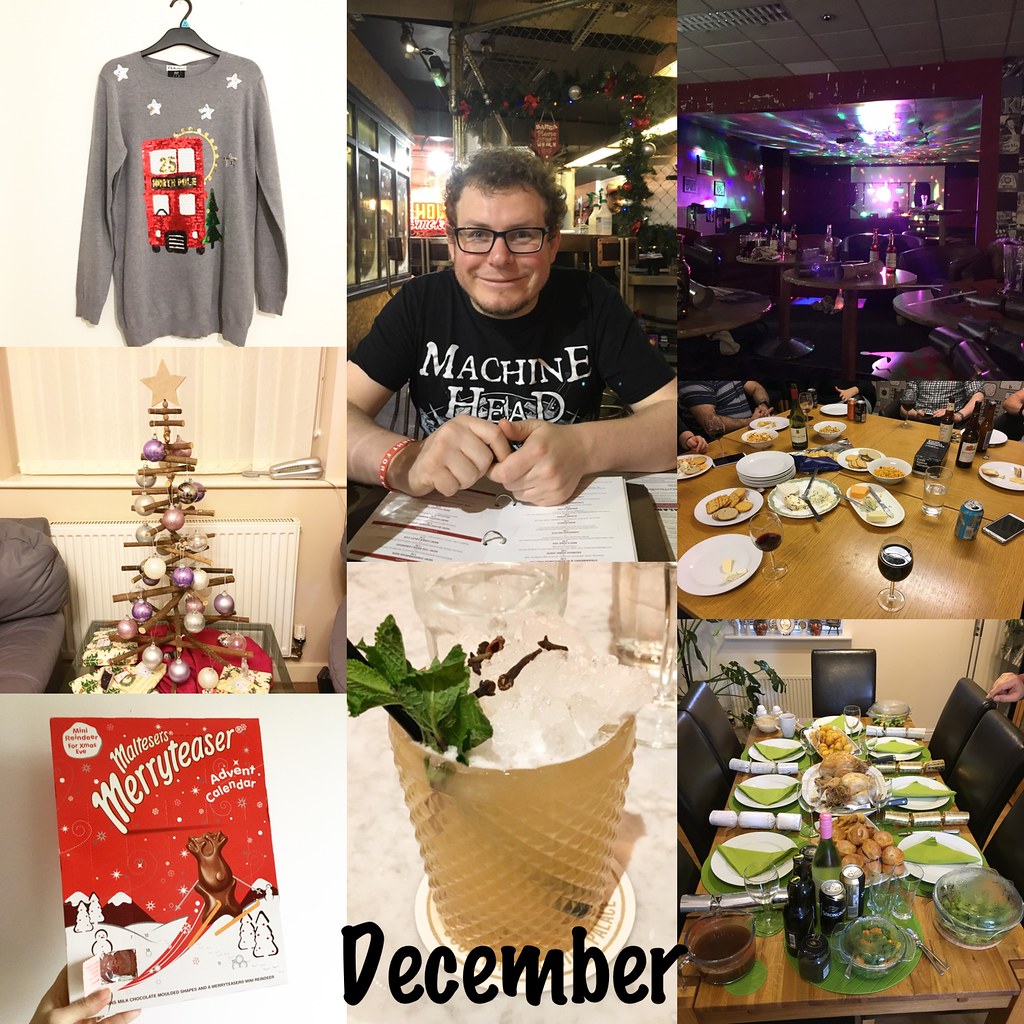 Free advent calendars, alternative Christmas trees and my very first Christmas jumper. December started off great! And it continued to impress me. Being self employed I didn’t think I would get a Christmas do but surprisingly I went to 3! Topher turned 29 and doesn’t want to talk about what’s inevitably going to happen the same time next year. We both went to my parent’s for Christmas with the cats in tow which went very smoothly. It was a super chilled Christmas and we’ll also be having a chilled New Year – food and drinks at Claire and Steve’s with board games of course!

Friday Funny: You’ve got to admit…

When your sister in law gives you & your husband a