Regular readers will know that I go to Jordan every year to visit my family. For the last couple of years, Topher has joined me and for the first time this year his sister Emma came too.

Of course this meant we had to live like tourists for our two and a half week stay (especially since Topher had only done Amman and the Dead Sea once) so we began with a nights stay in the Marriott Dead Sea Resort. 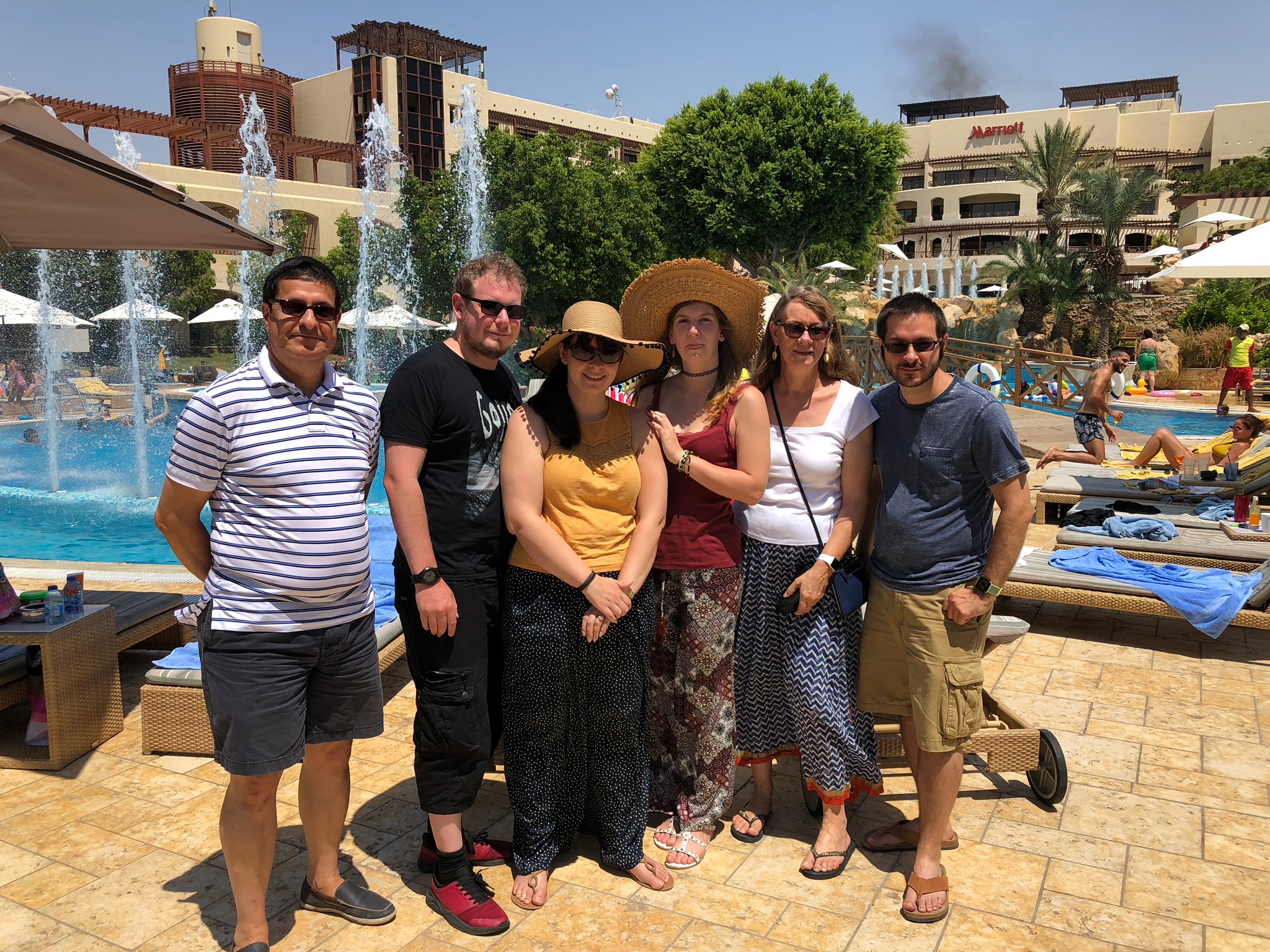 If you ever find yourself in Jordan, The Dead Sea is a must visit. It’s the lowest point on the planet and it’s a sea that’s so salty that no living thing can live in it. Plus it makes you float on the surface which is a great opportunity to do the ultimate tourist pose and float reading a book for the camera.

It’s less than an hour’s drive away from Amman so perfect for a day trip but we decided to begin our quest south there and stay overnight. I’ve stayed in the Marriott once about 12 years ago and I still remembered it as the comfiest bed I ever slept on so it’s a must if you’ve got room in your budget for a bit of luxury. Damn I miss travelling with my parents! 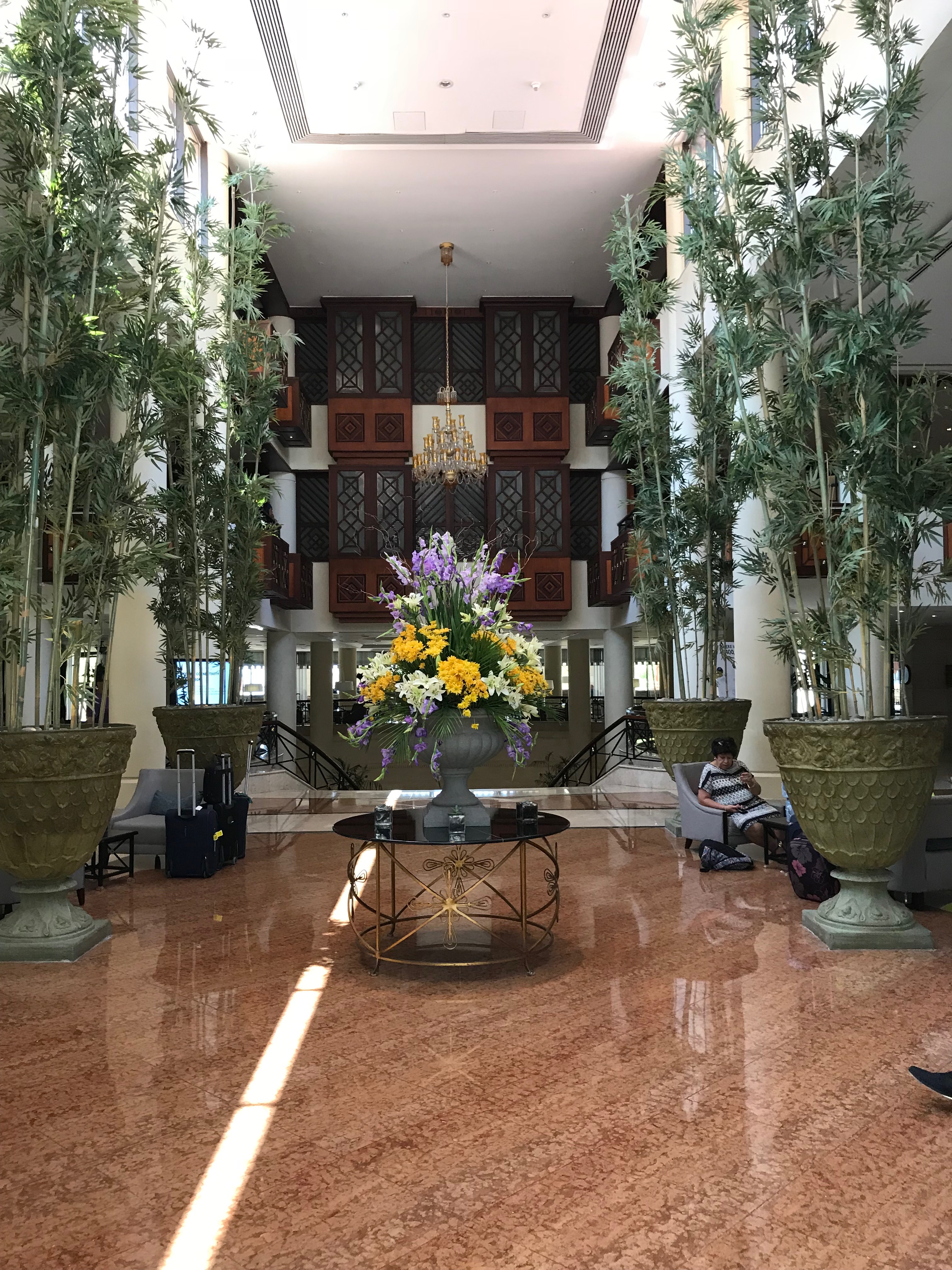 The Dead Sea is ridiculously humid which is a stark contrast to Amman which is more of a dry heat. So I think we only lasted about 10 minutes outside fully clothed before I wanted to either fling myself in a pool or rush inside back to that sweet air conditioning. It was nice to take a tour of the pools but I really wanted to get my swimming costume on and get in the sea. 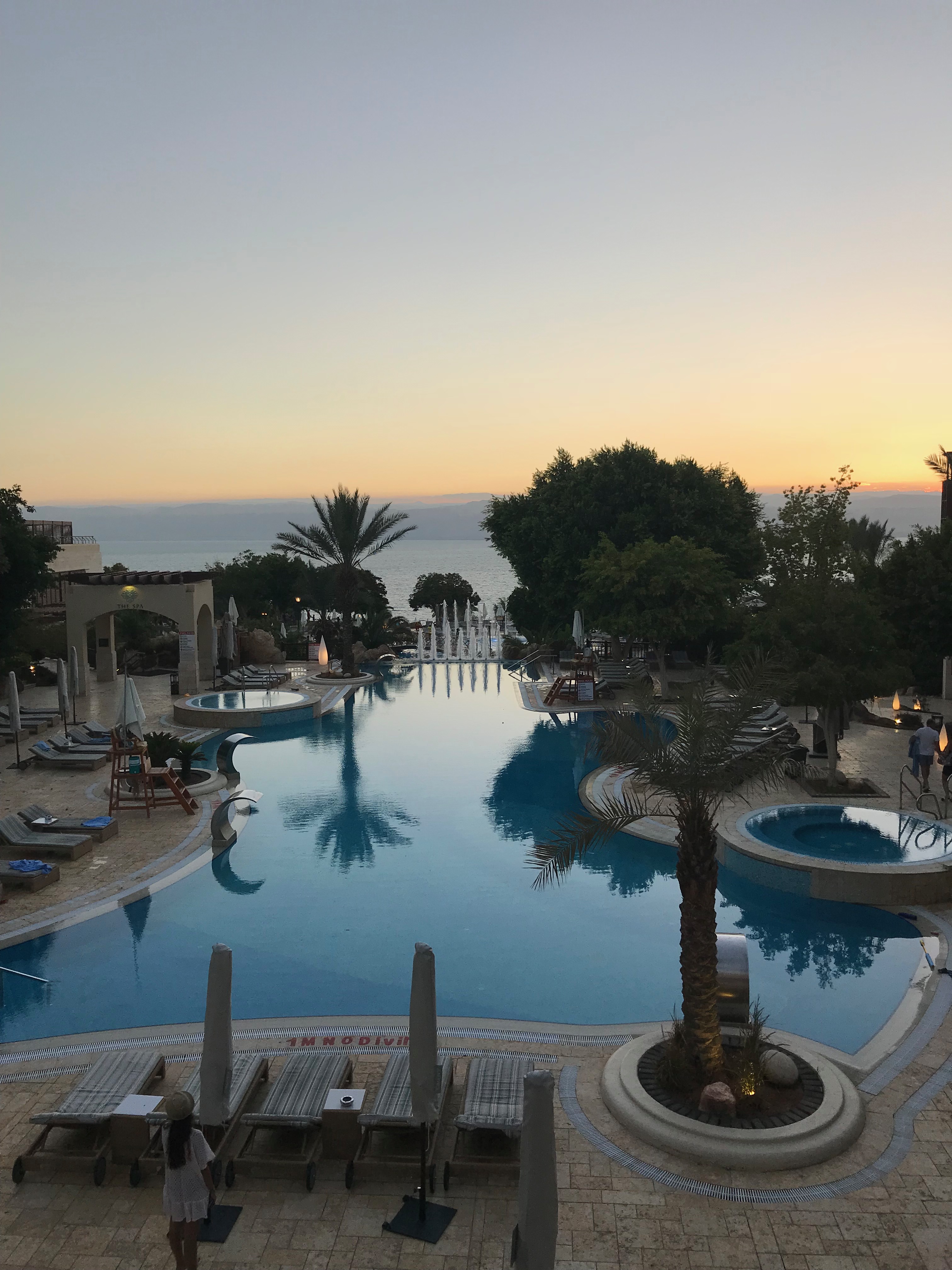 There were three pools to choose from surrounded by stunning grounds. How pretty are all the flowers? 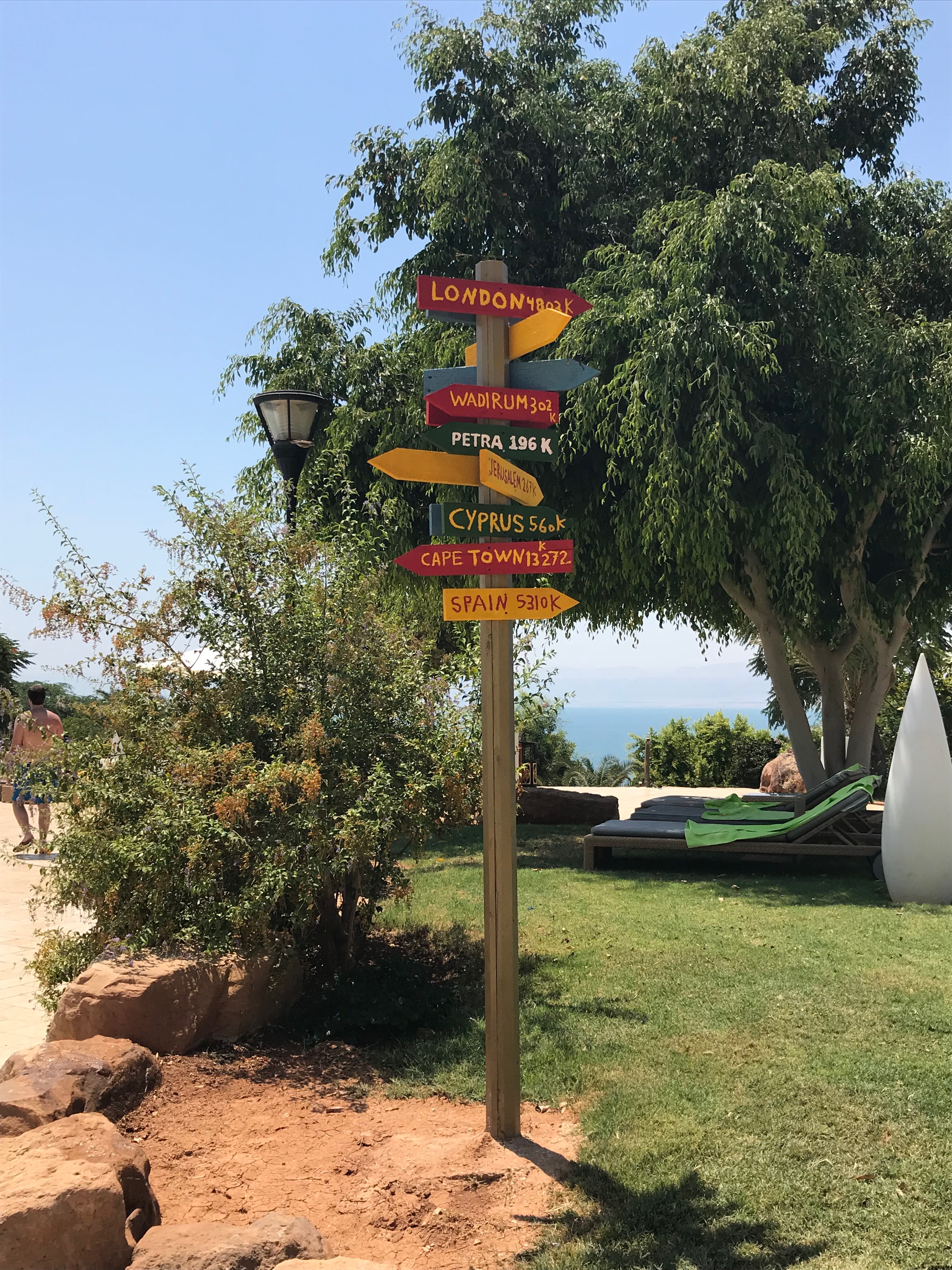 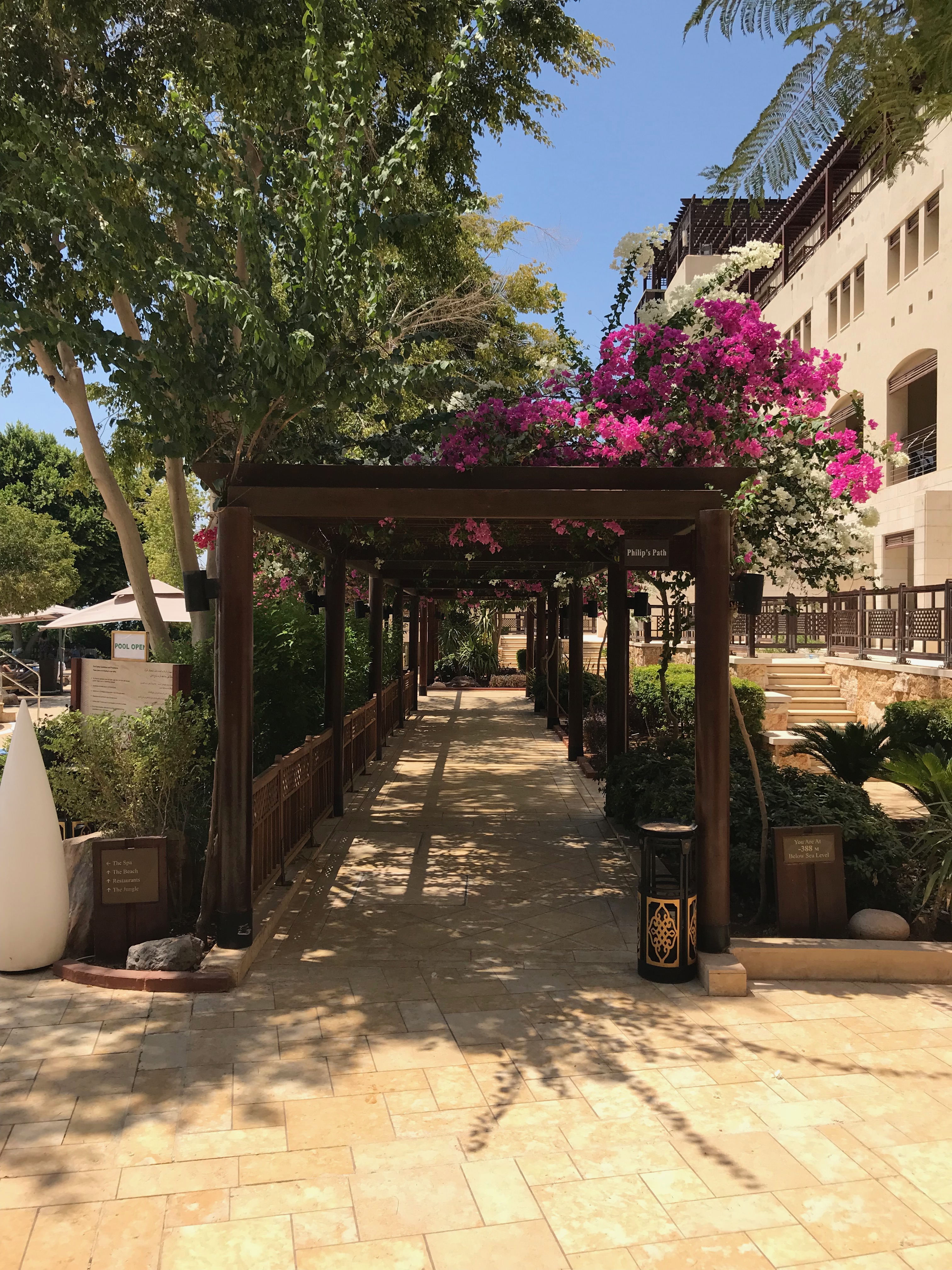 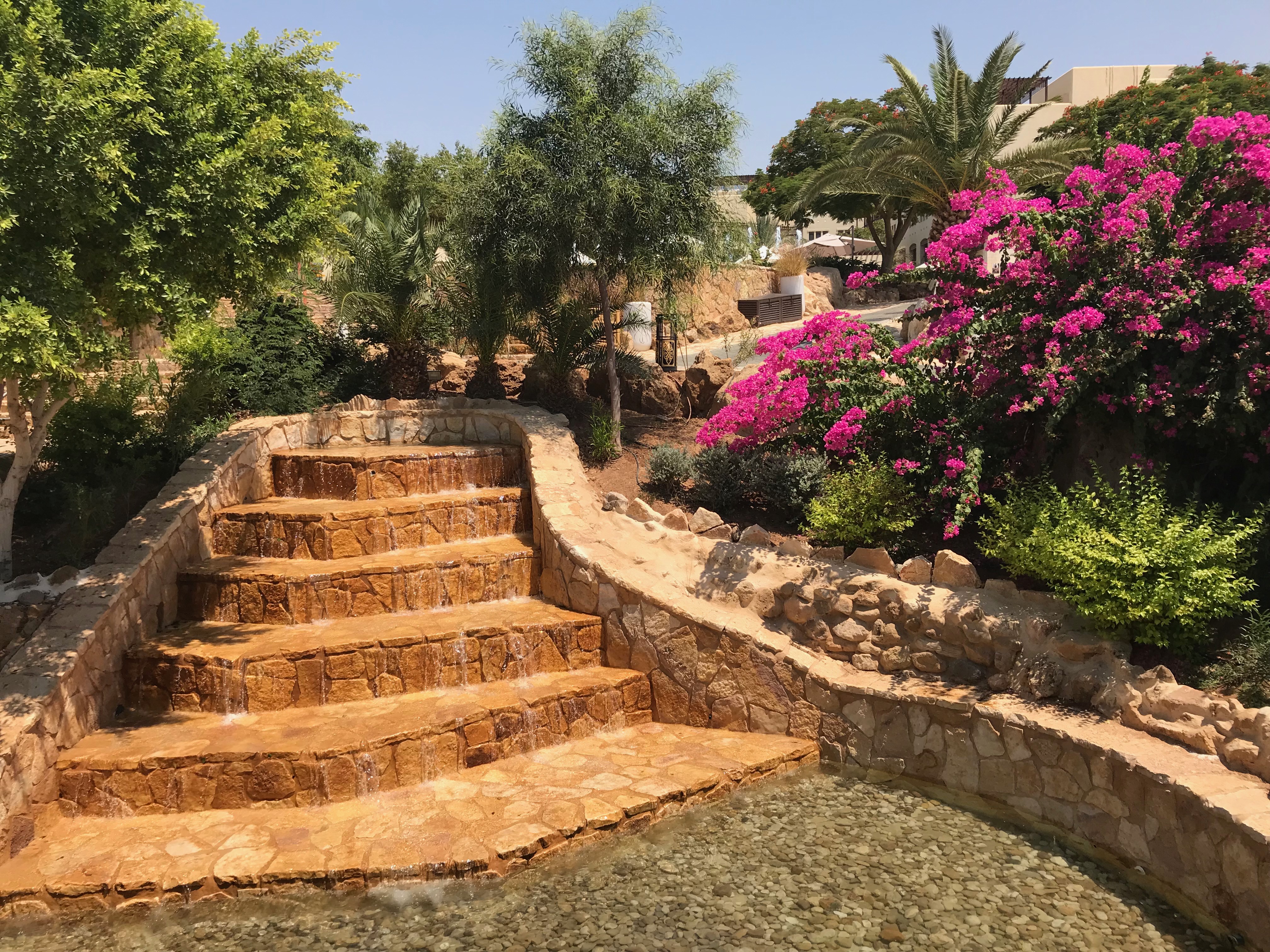 The sea itself is located down a massive load of steps where the resort had cordoned off their own section for guests to swim in. If you’re not staying in a resort you can either get a day pass or just use one of the public beaches further along. 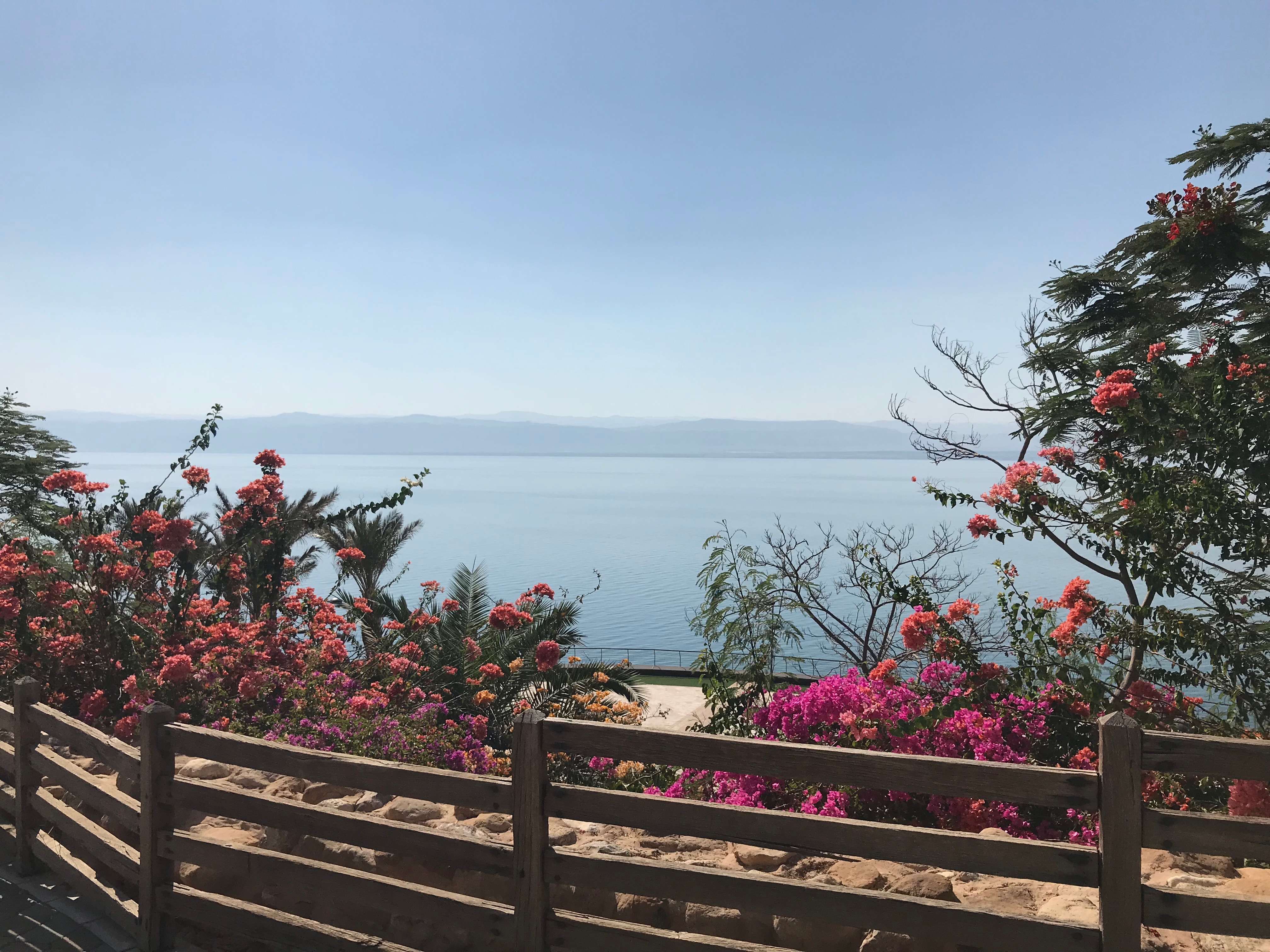 So the usual routine (at least at the resort) is to have a float around in the sea itself before walking over to one of the barrels of free Dead Sea mud and covering yourself with it before rinsing it off in the showers on the beach.

One piece of advice I have for you, ladies (and gents if you’re so inclined) DO NOT shave your legs before going in the Dead Sea. Definitely don’t do it the same day and I would avoid doing it the day before because that stings like hell – this may be coming from experience. And same if you have any cuts or blisters. It’s good for them yes but man oh man it hurts.

This was actually the first time I had gone in the sea in years because the last couple of times I had both of the above problems. I had a large scratch on my leg which had just healed and I had shaved my legs two days earlier. Both my legs were tingly in the sea but not painful so phew! 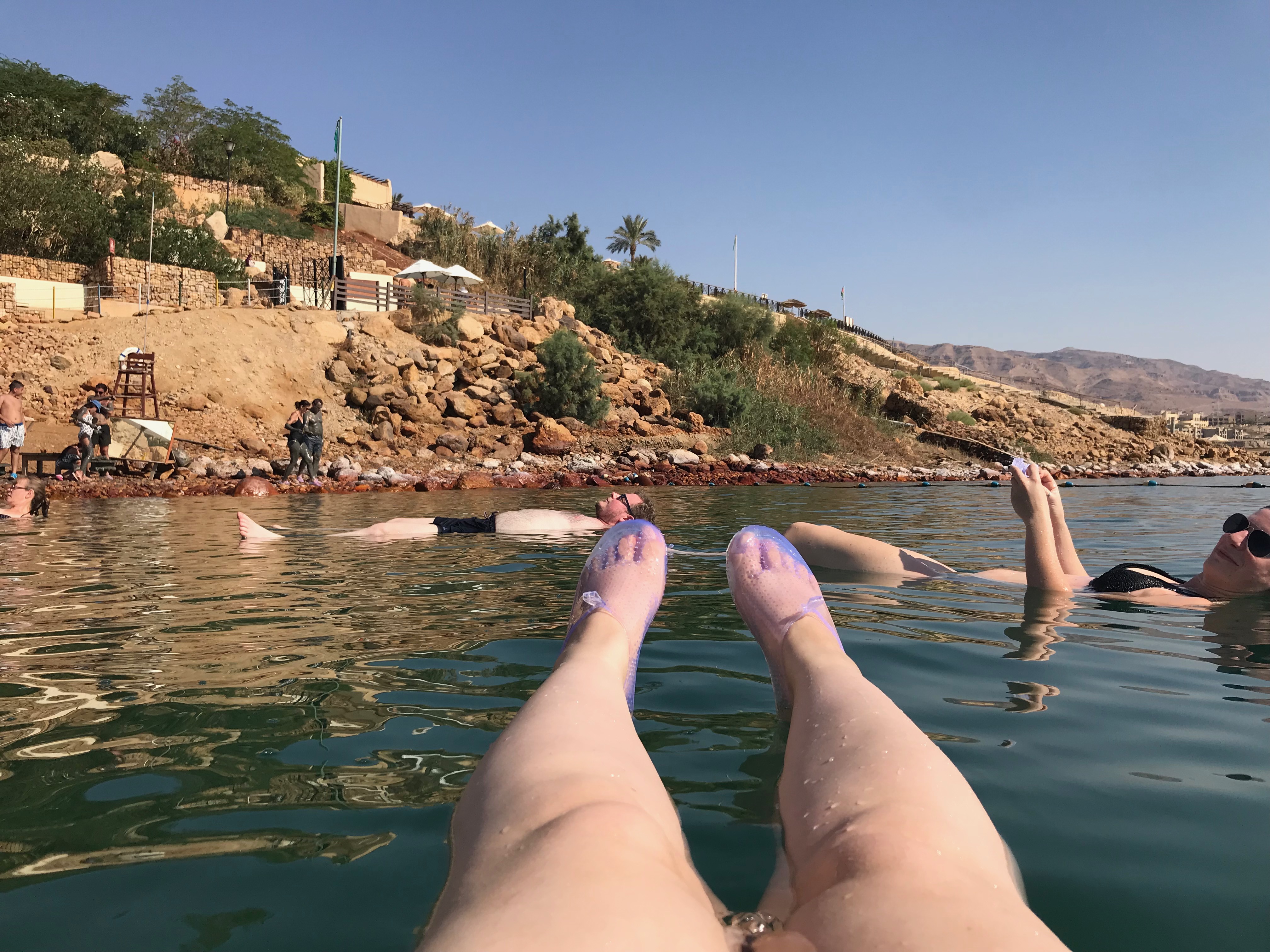 I actually took my phone in this time and managed to not drop it in so #winning. It’s a weird sensation floating on top of the water but it’s really fun and an experience you should definitely have once in your life. 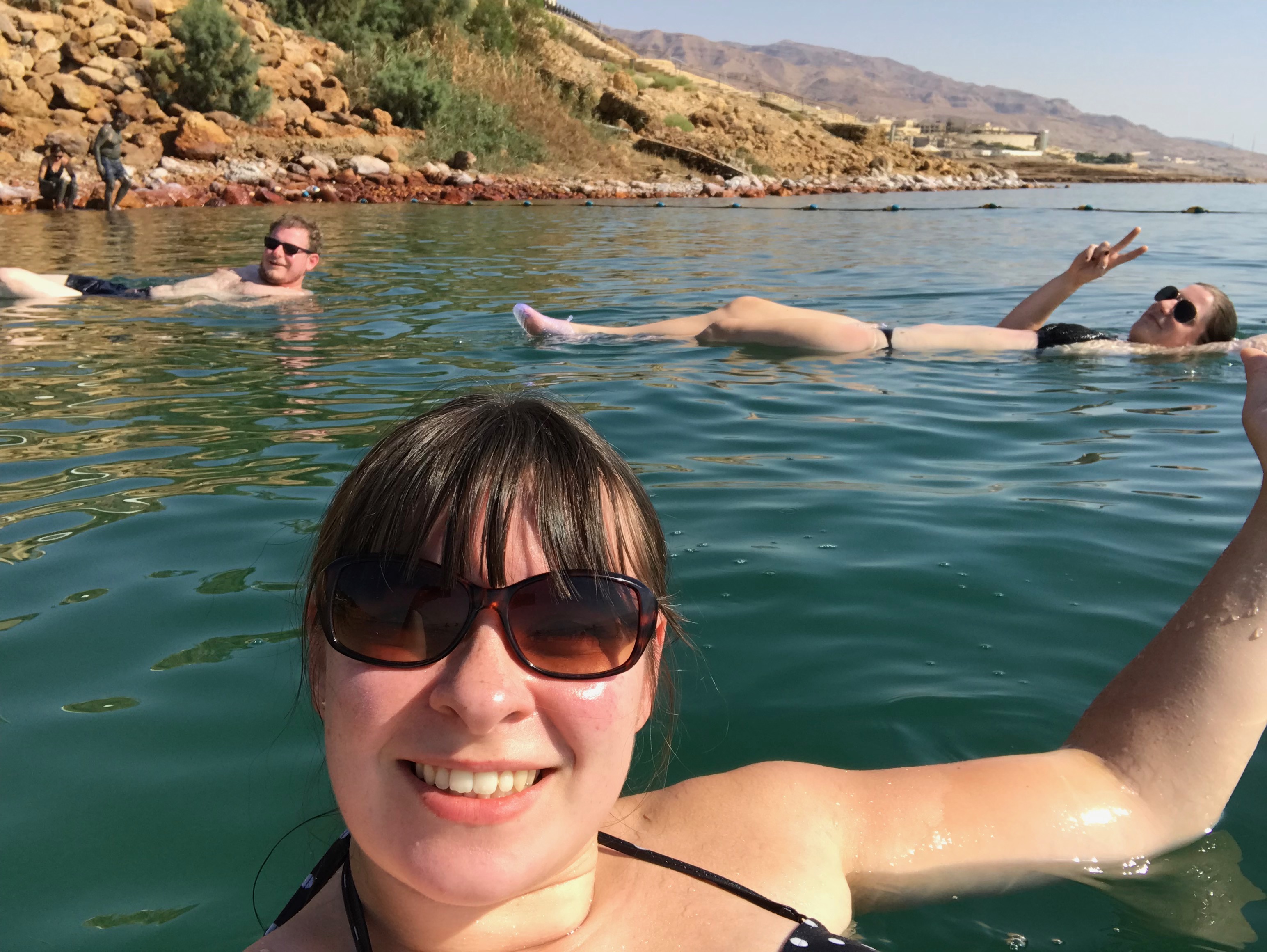 Now you may not have heard of the Dead Sea before but you surely would have seen Dead Sea mud products in stores all over the world. This is the famous mud that is known for being amazing for your skin as it’s rich in salts and minerals, particularly magnesium, sodium, potassium and calcium. There’s a long list of benefits to the mud and it’s a fun experience to slather yourself in it for no extra cost. Who needs a spa? 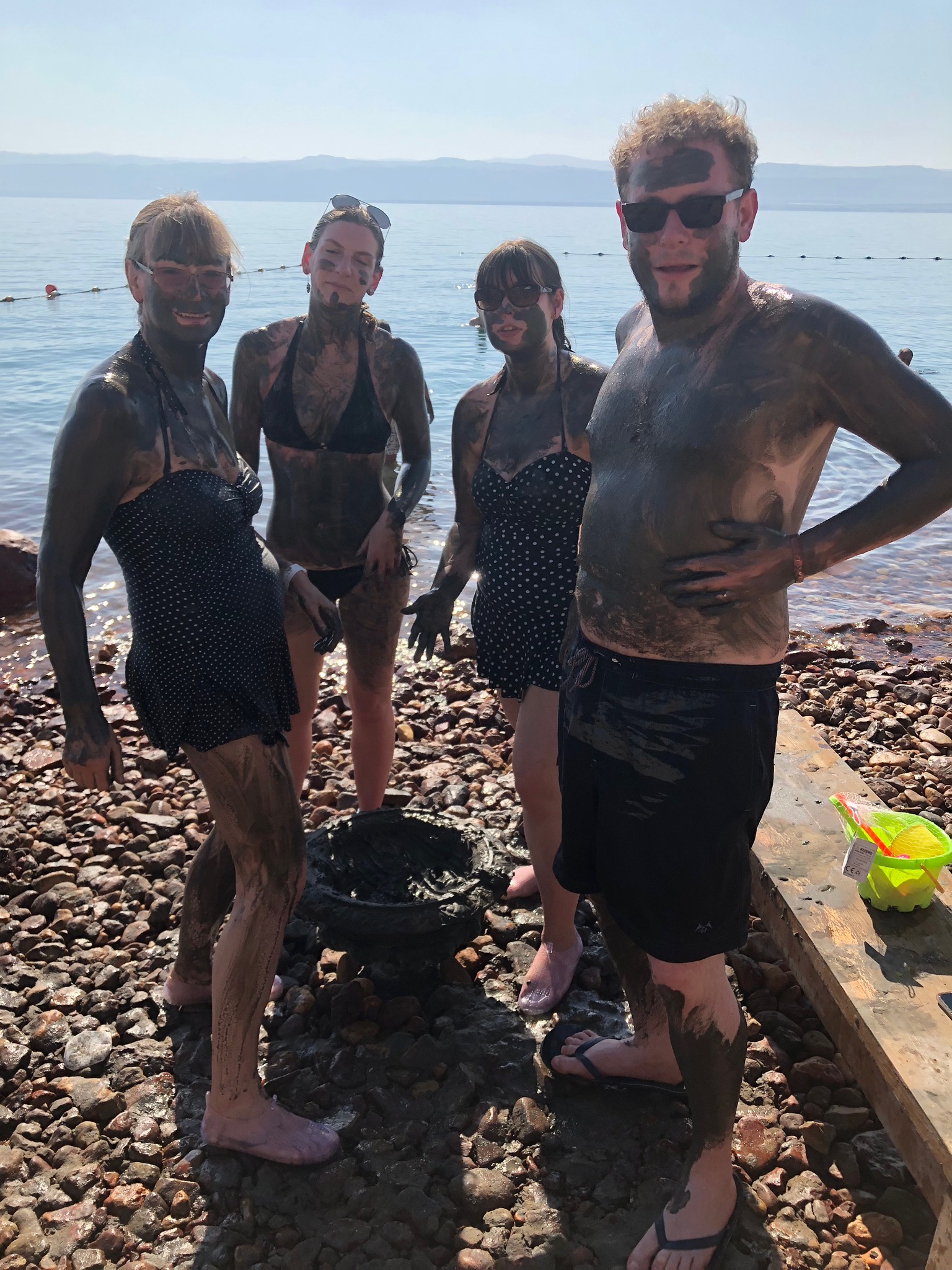 Just one more warning; when putting the mud on your face take care that your face isn’t too wet. Emma found out the hard way and some salt water dribbled into her eye. Major stinging. Luckily the lifeguard was on hand with some water in lightning speed. Stay safe kids.

After that we rinsed off and headed up to the pools to cool off some more. It’s so hot here I just recommend being in a body of water at all times! 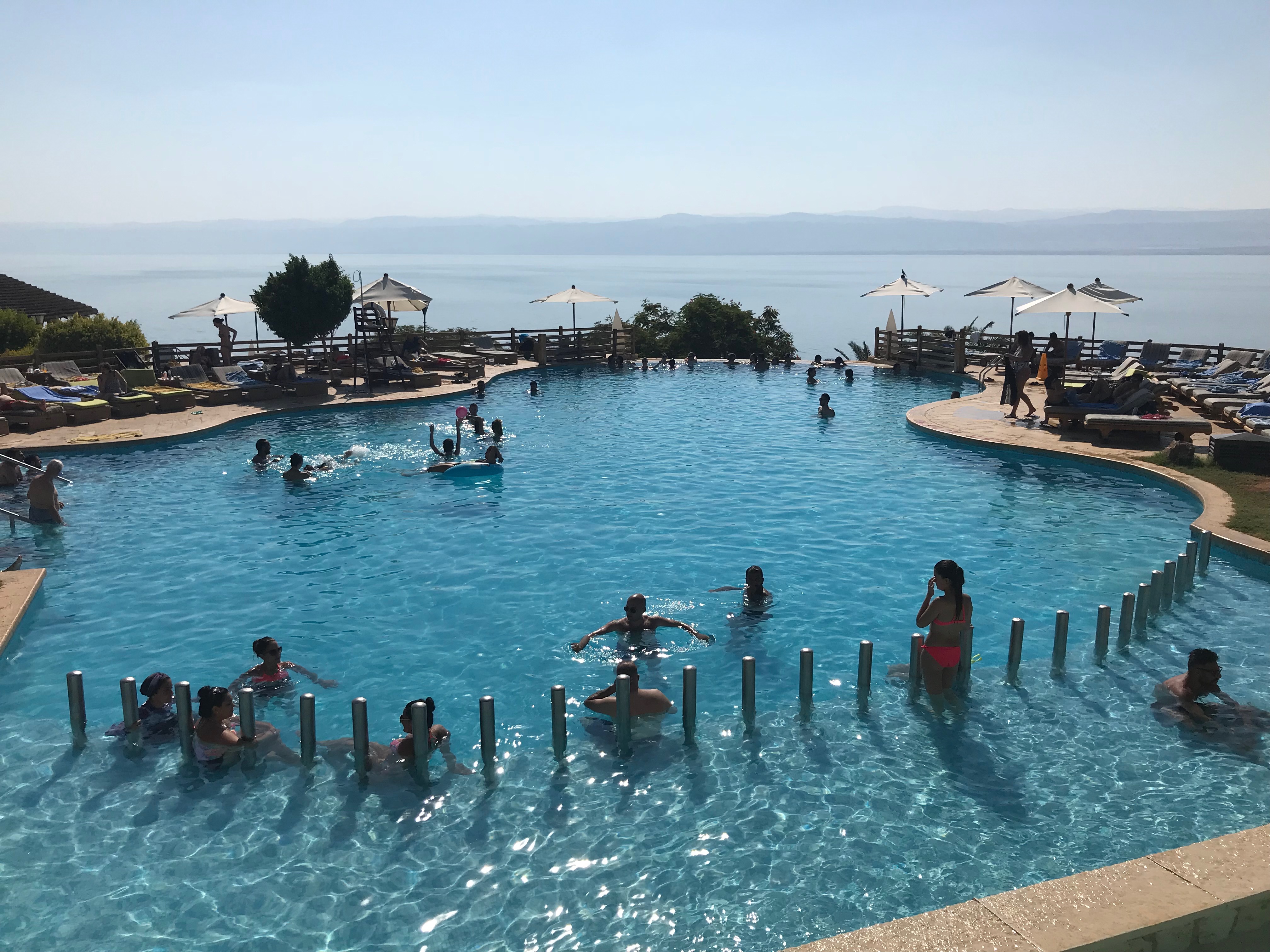 Night time around the resort is just as pretty and after dinner we had another wander round. I definitely recommend staying over one night as it’s nice to just take some time to relax. We needed it as the next day our adventures continued to Wadi Rum. 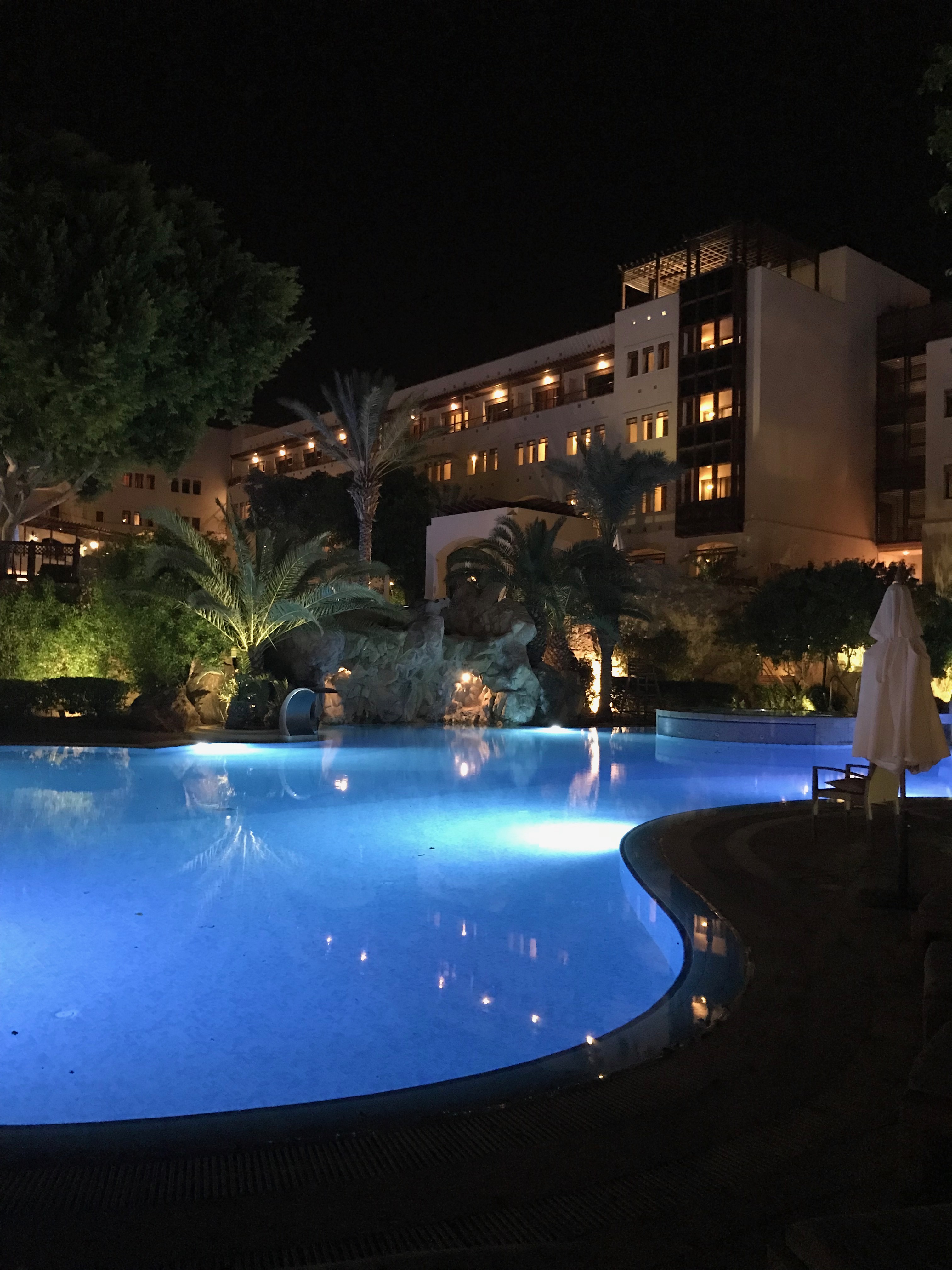 Stay tuned for my next Jordan instalment!

3 Perfect Countries For The True Wanderer

One second every day