Madonna Inn has been on my bucket list for quite a few years now.

After discovering it through the world of blogging and social media, I had to make it part of our honeymoon. Perfectly, the Madonna Inn is situated in San Luis Obispo, California which is approximately half way between San Francisco and Los Angeles.

Though you can spend days road tripping between these two cities, we were on a tighter schedule so split it over two days with Madonna Inn being the overnight stop in between.

So our journey started back at San Francisco airport where we picked up our rental car. This is the only photo I have with it. Isn’t it dinky? I thought Jeep’s were supposed to be big! No matter, we had a giggle and it was a really nice running car. 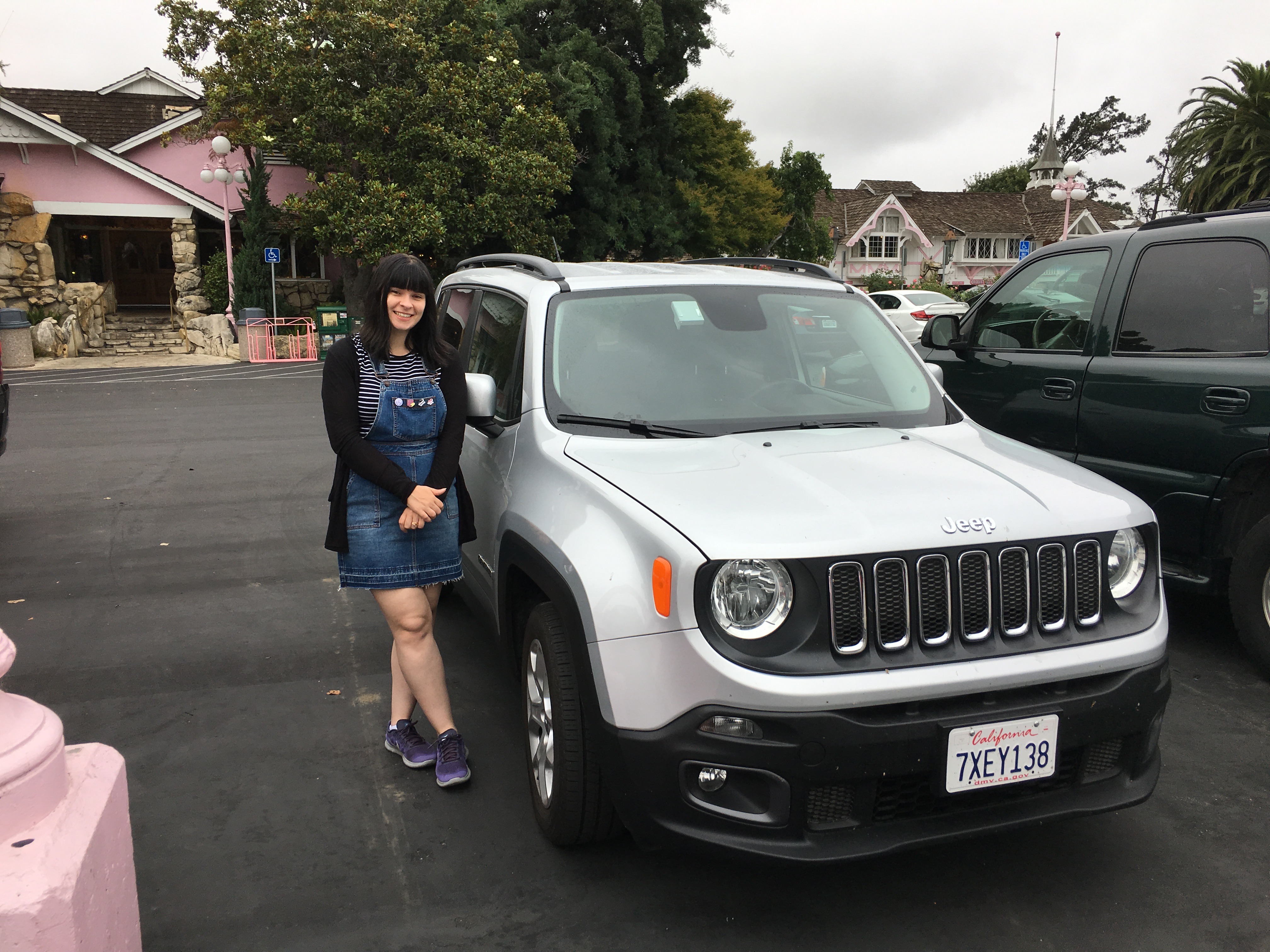 We set off sometime between 3 and 4 in the afternoon with plans to reach the Madonna Inn by 8pm latest. We would take the 1 highway that runs along the coast (purely for the photos!) Topher noticed that Big Sur was actually all closed due to roadworks so we planned on getting off the 1 before hitting that section of the road. It seemed like a good plan. 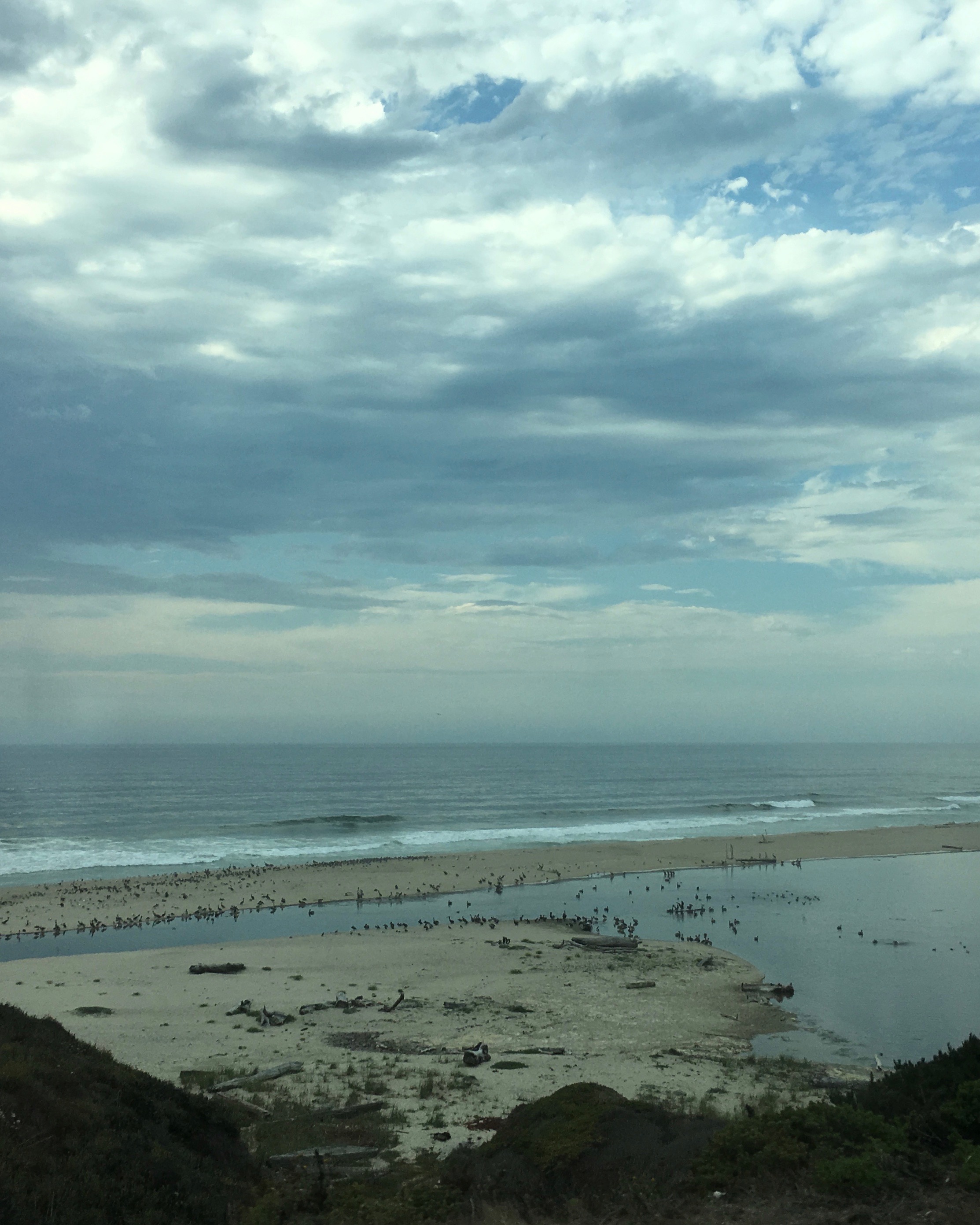 Topher actually vlogged a lot of the journey as I was driving so at some point I’ll get that up on my Youtube channel. 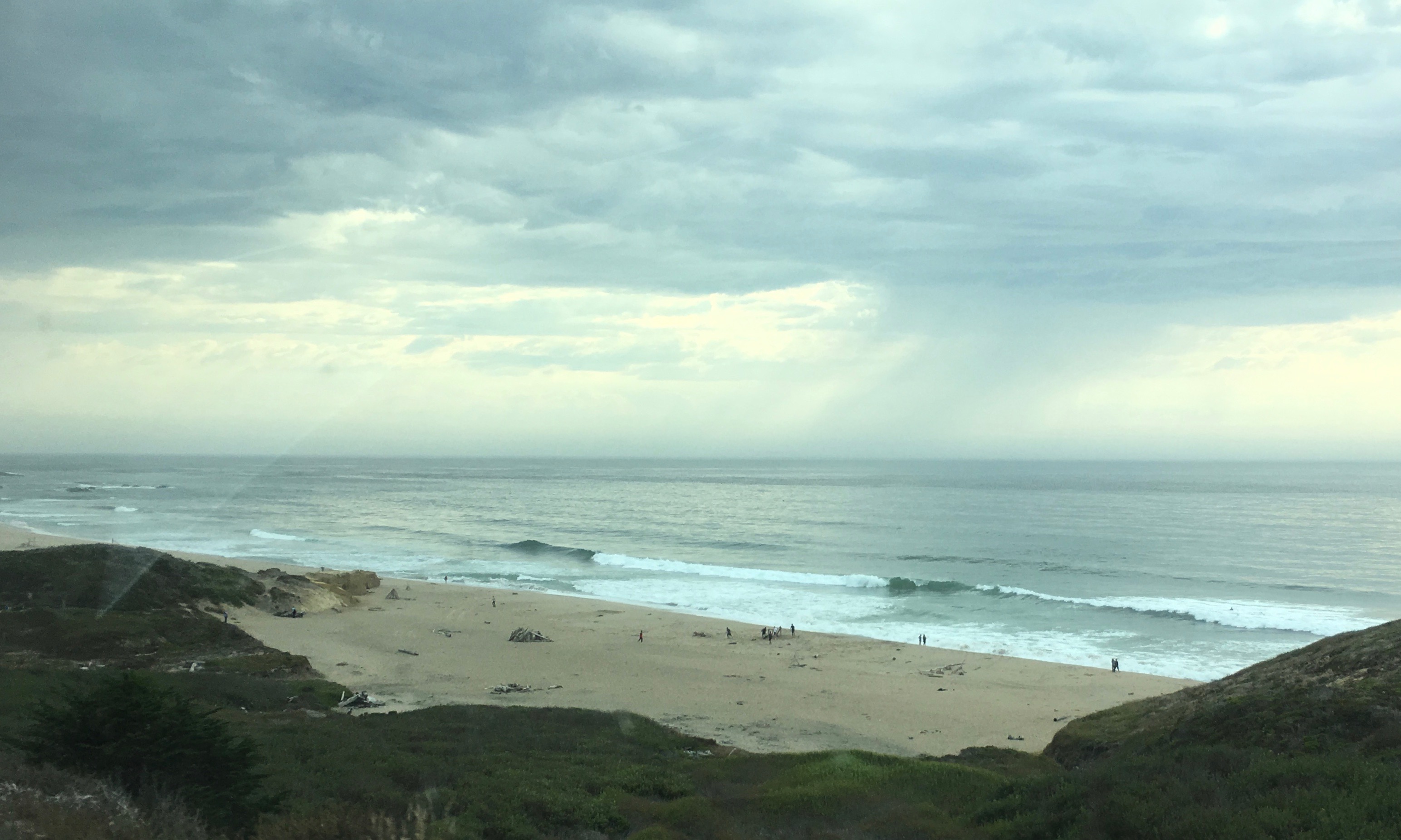 Unfortunately we ran into a lot of traffic along the way but we also combined it with missing a couple of turns which led to me driving after dark.

Not usually a problem but as you can see, there are no lights on these roads and the cats eyes on the road were pretty useless. So you couldn’t see a thing. There weren’t many other cars on the road. This was paired with the fact that 75% of the time the highway exits were on bends and it was natural to follow them off so you had to really keep your eyes peeled so you stayed on the road.

Topher who usually falls asleep on these kind of trips was wide awake and had his phone sat nav on so he could warn me when the road bended. It’s safe to say that my body was locked in a tense gripping onto the steering wheel type of situation. I’ve been driving for over 12 years and this was my third time driving in the US and was definitely up there on my list of terrifying driving situations.

Luckily it was only about an 80 mile stretch in the dark so I just drove like an old woman and we eventually made it to Madonna Inn at around 10pm. 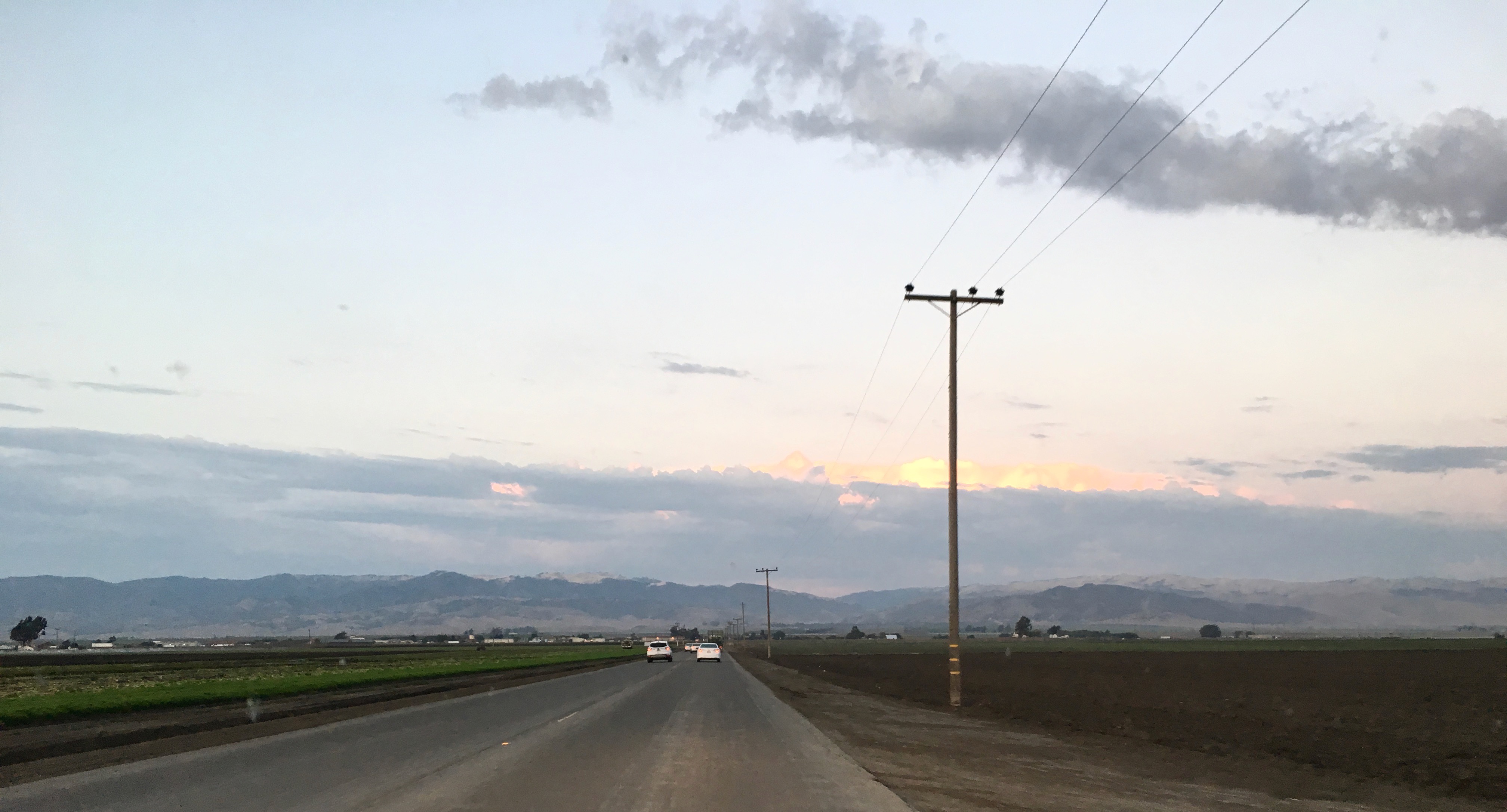 Absolutely shattered, we grabbed some burritos from Chipotle just up the road and we checked in.

We got the Starlite room which is the one I requested. Yay! Sorry for the terrible photos – it was obviously night time so the light wasn’t on my side.

So we’ll start with the bed. Doesn’t this look like it belongs in Beauty and the Beast? 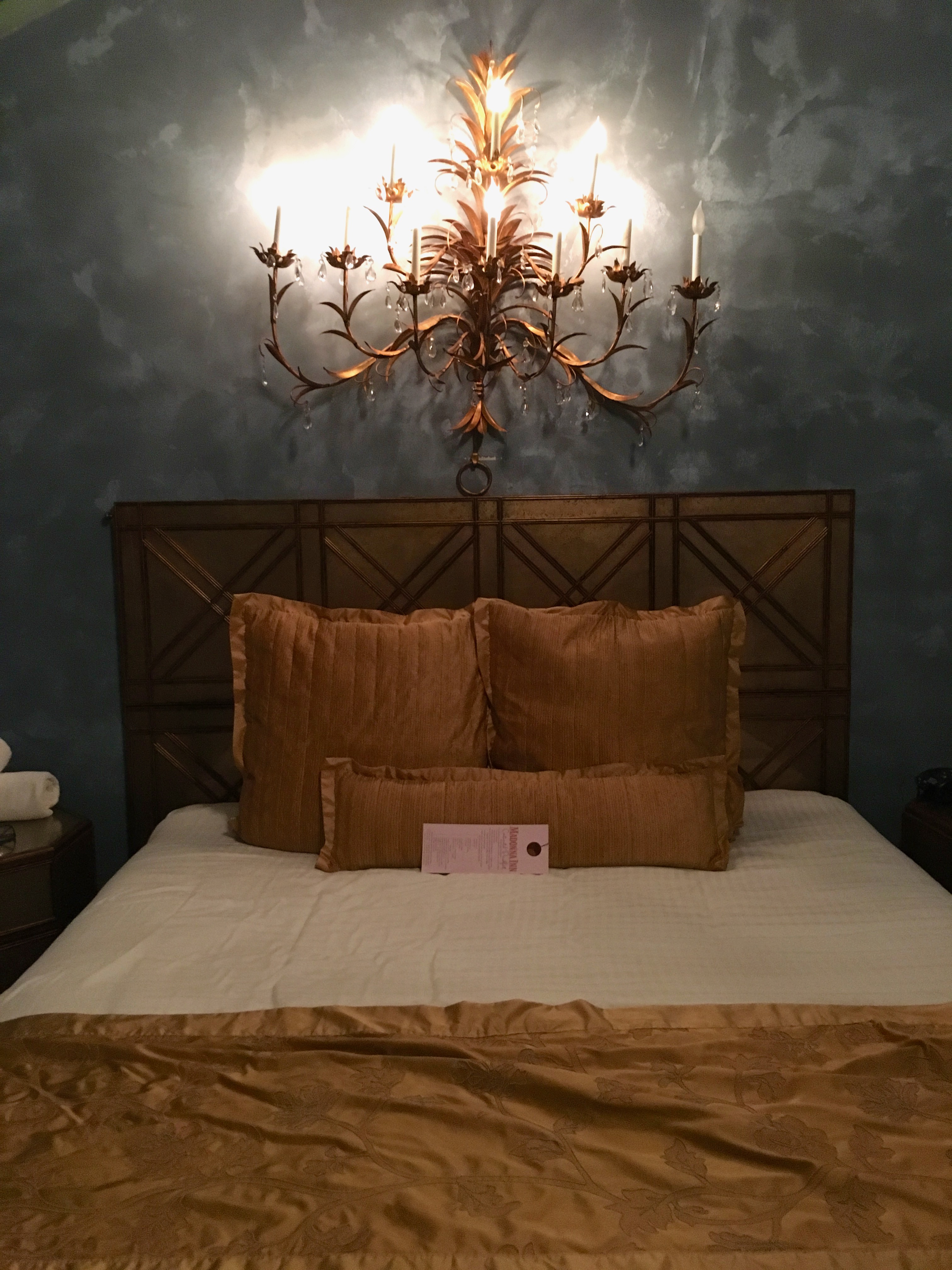 The ceilings were so high. I now realise I barely took any room photos but I did do a super shaky room tour so I’ll get that on my channel as well. 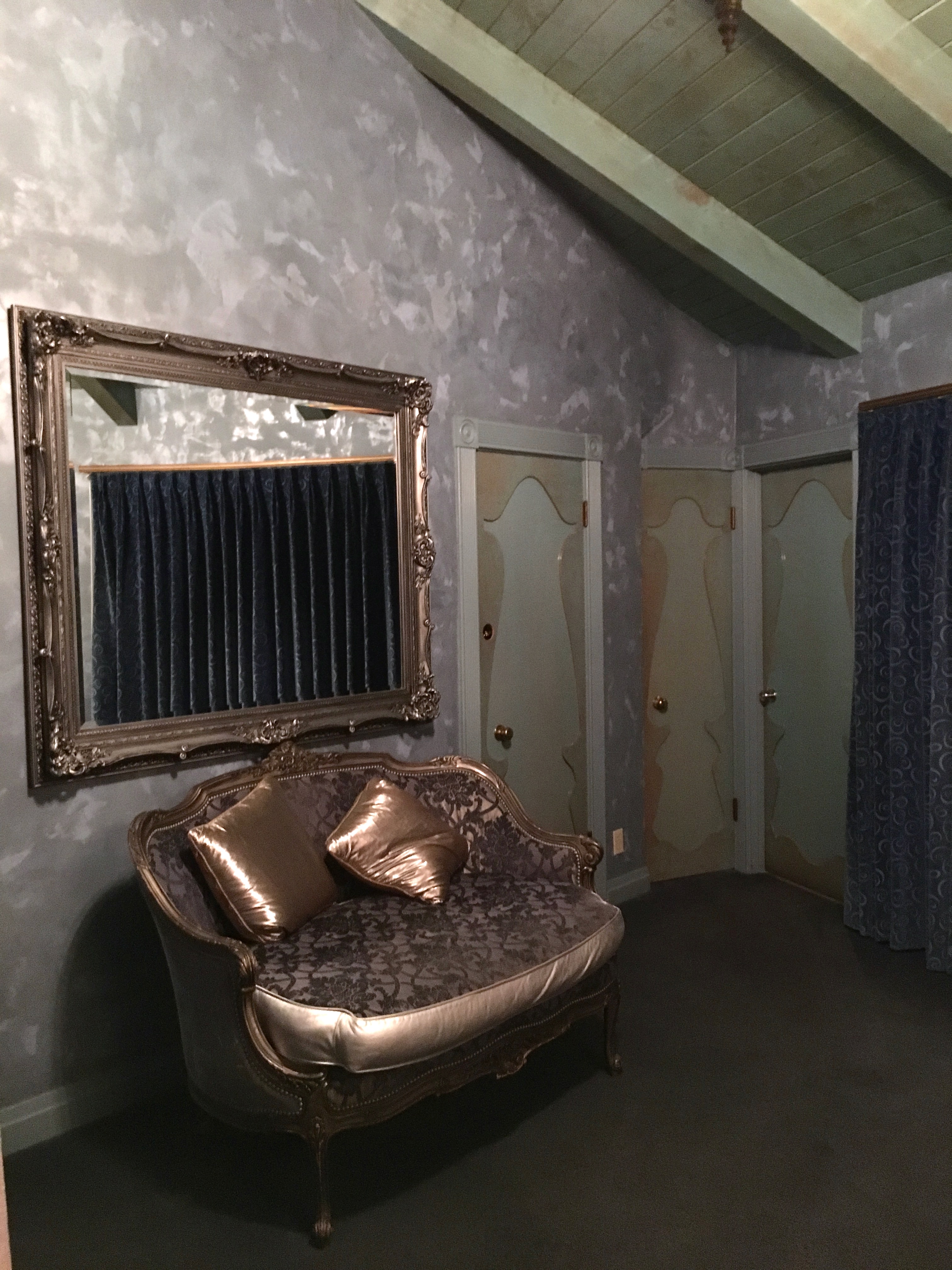 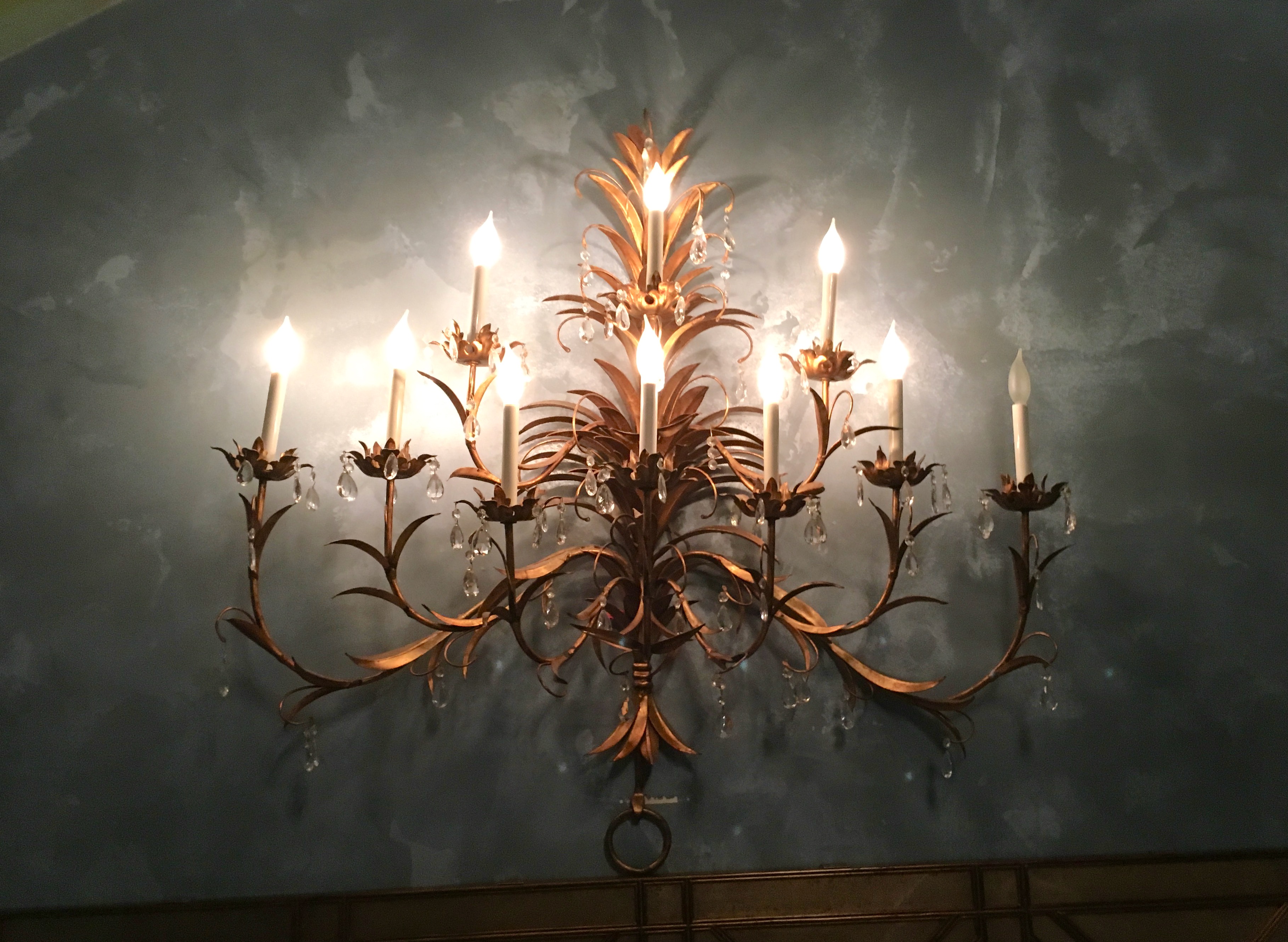 Of course I didn’t remember to photograph the bathroom but it was full of these blue tiles. 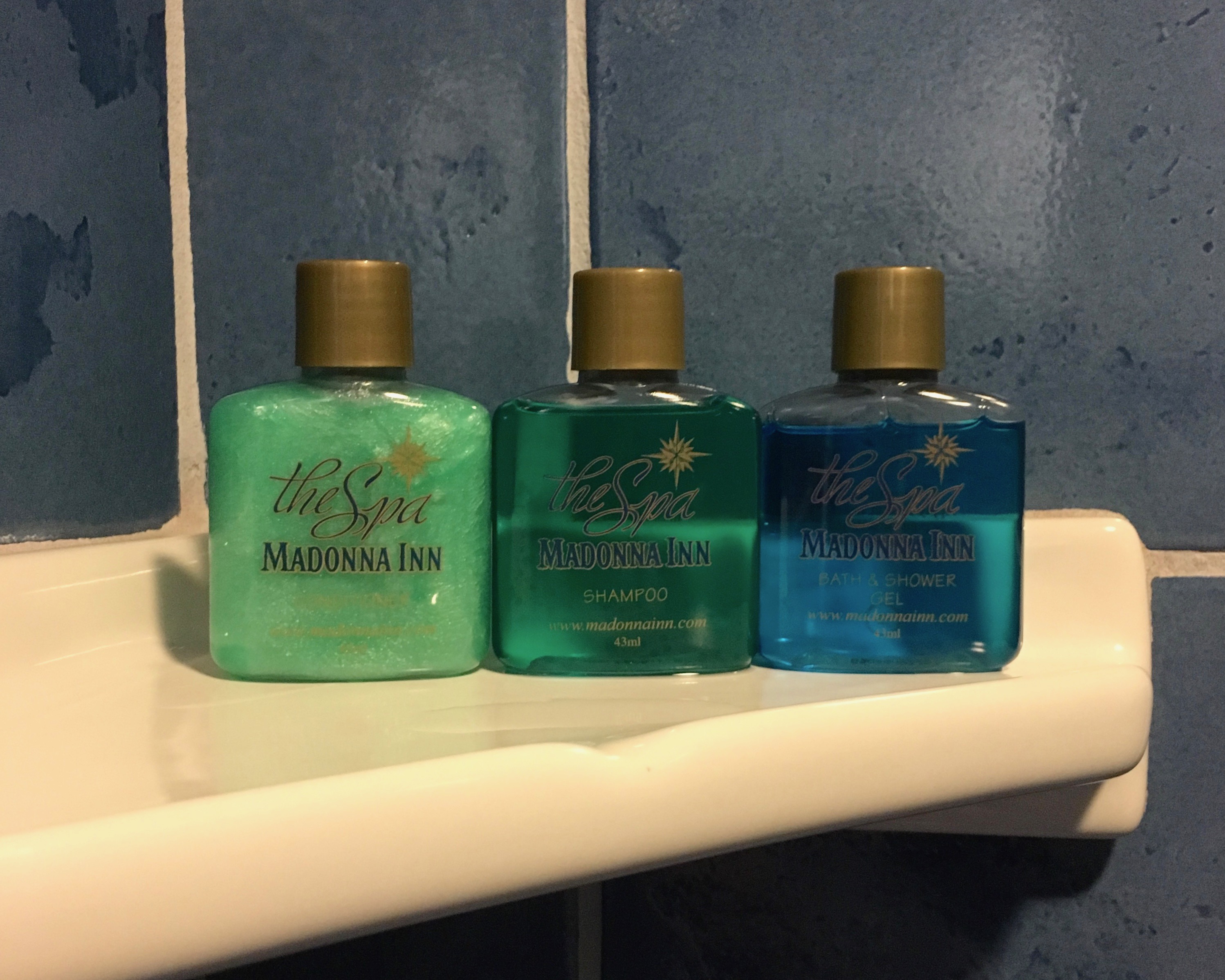 After a good night’s sleep we could actually appreciate the balcony that is attached to the room. 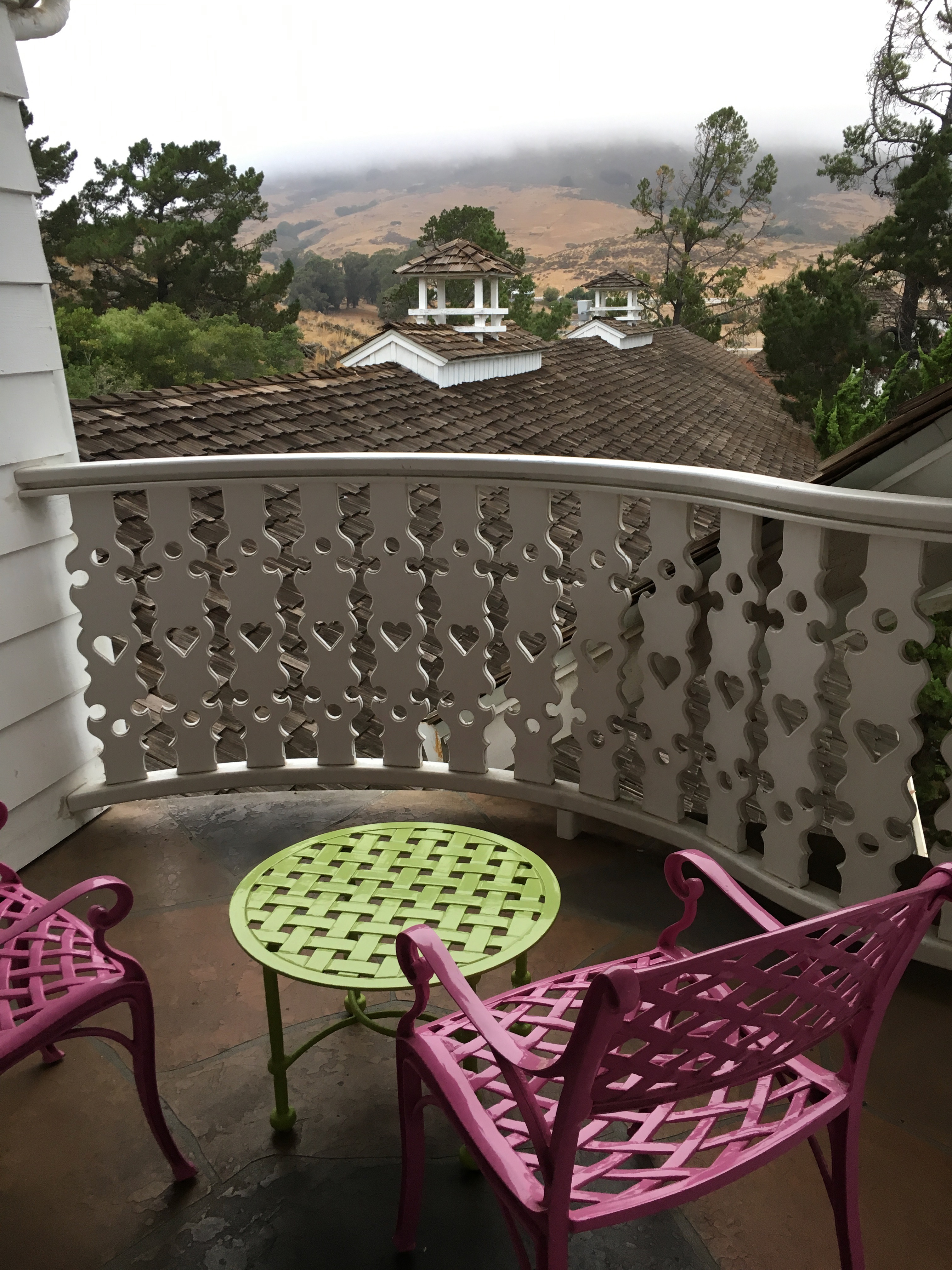 We had breakfast in the Copper Cafe which is part of the hotel and we sat in a booth. How awesome are these goblets? They’re actually for sale in their shop so you could get one to take home. Kinda wishing we’d been able to. Next time I guess! 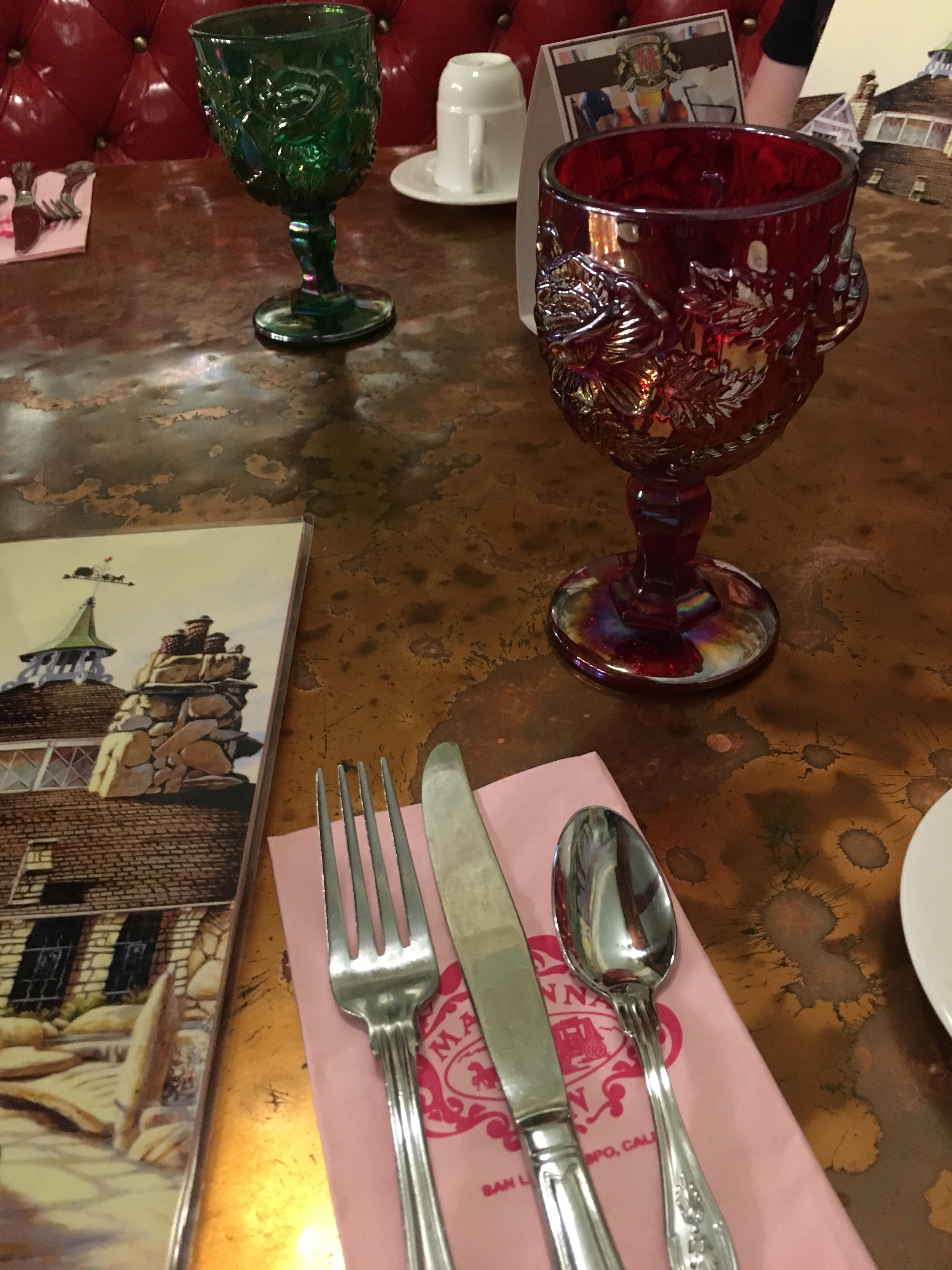 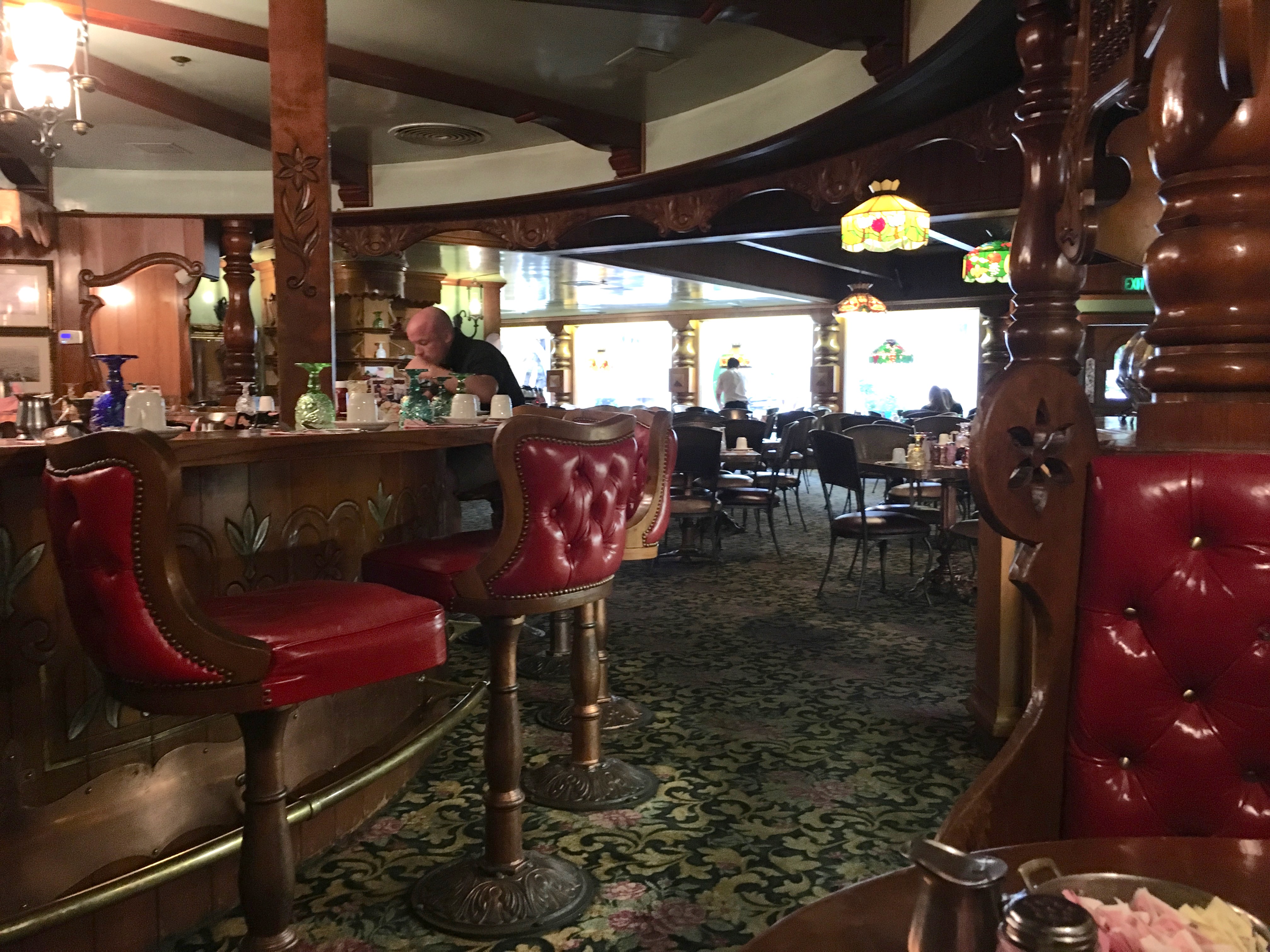 We both had pancakes and I hoovered most of them down. Not a bad effort. 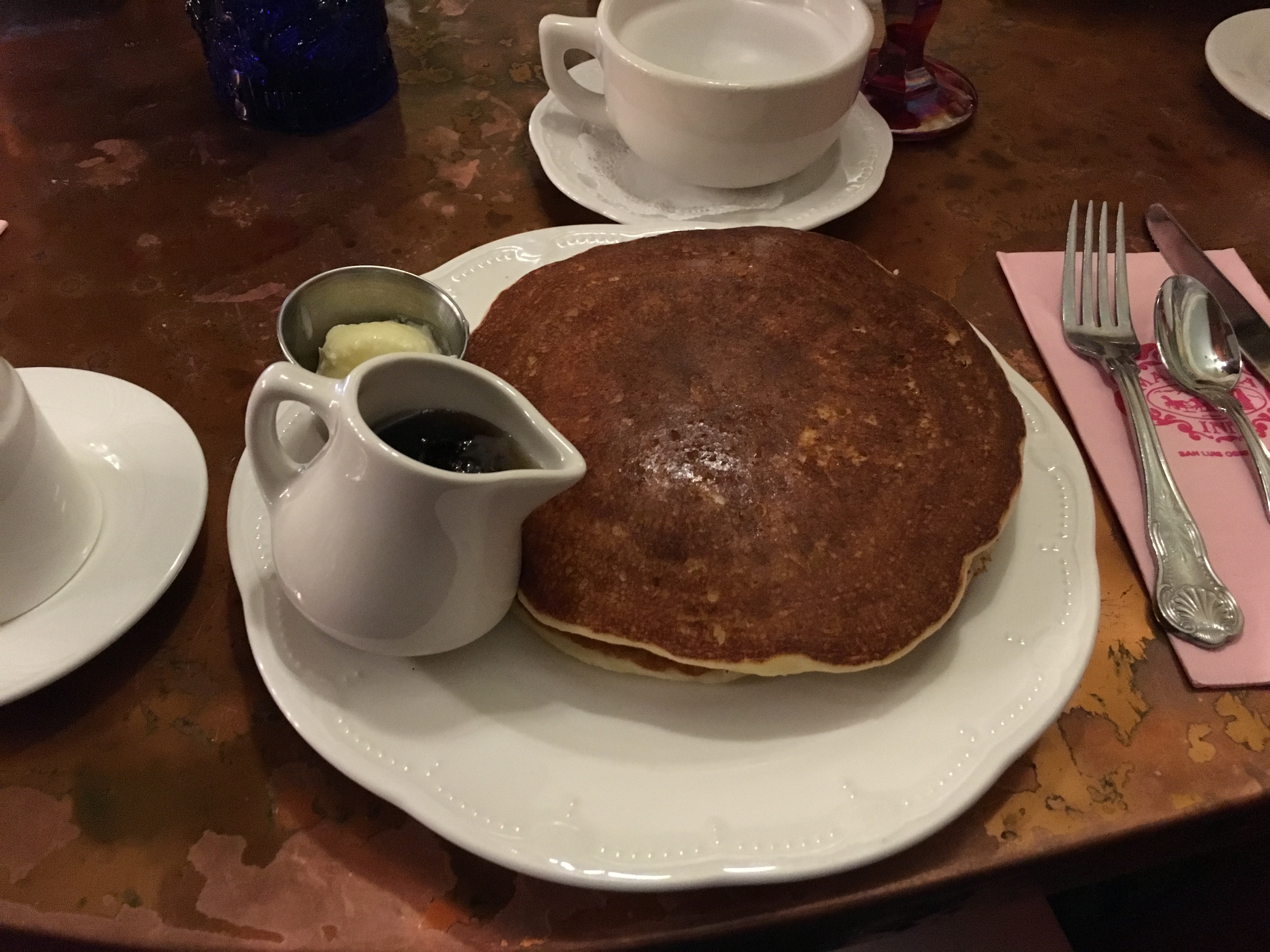 In the Copper Cafe they also sell chocolates and cookies. So tempting but we were stuffed and knew we’d be eating as soon as we reached LA. 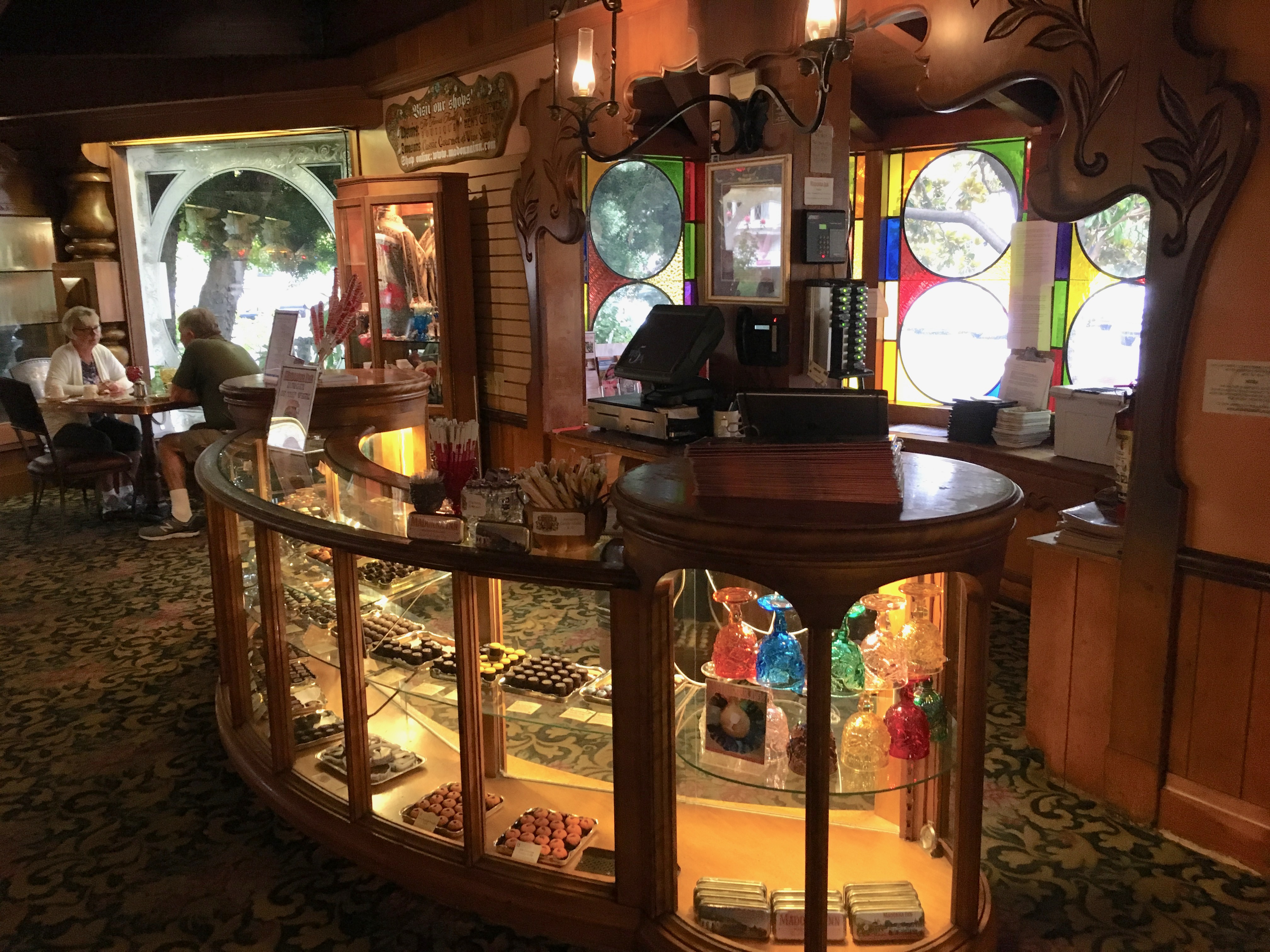 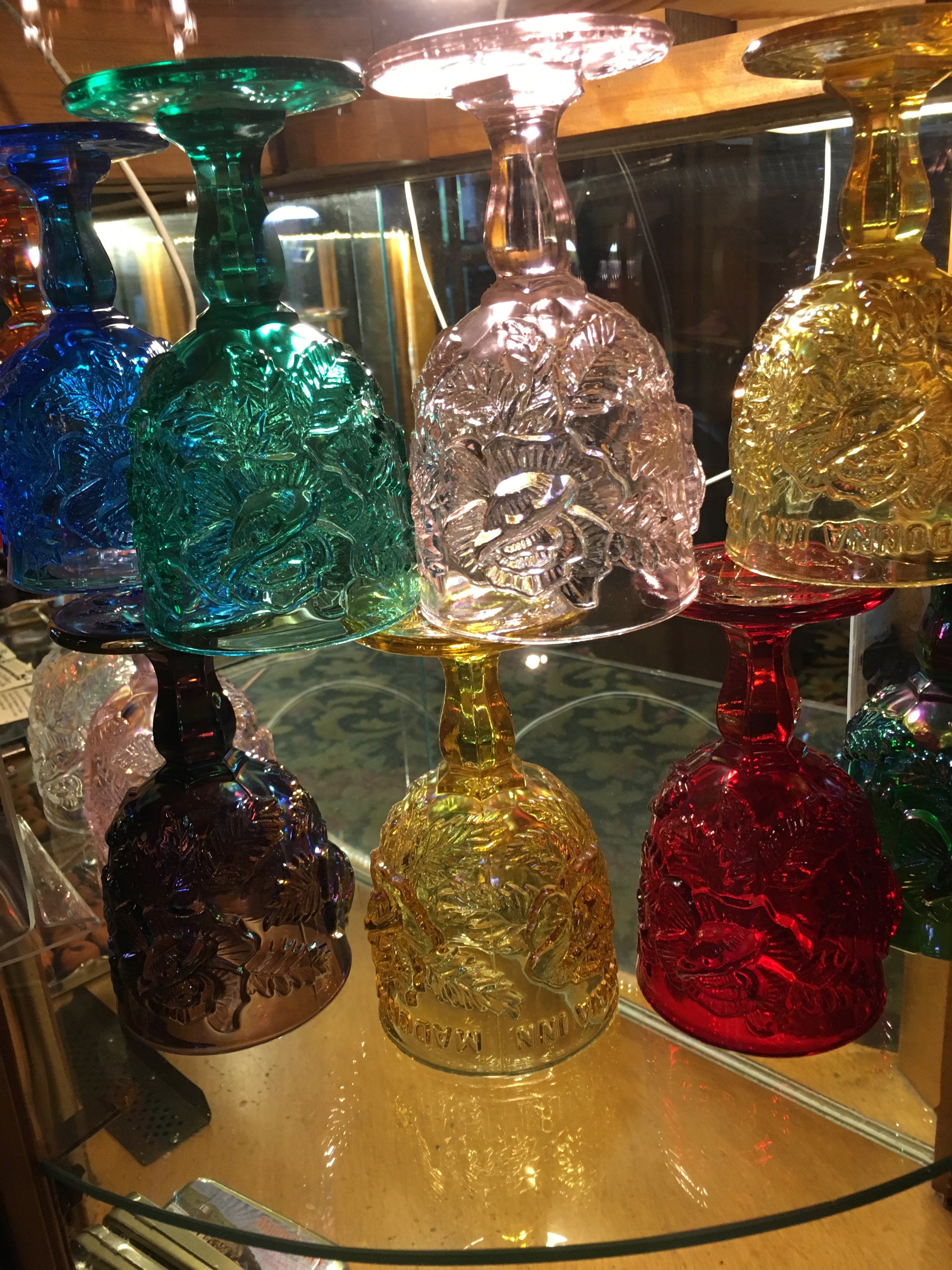 After breakfast we had a wander round to take some photos before heading off. We only saw the outside the night before and it was so pretty with all of the fairy lights in the world.

The started at the Steakhouse which we had considered booking a table for but I’m so glad we didn’t as we would have definitely missed the reservation. 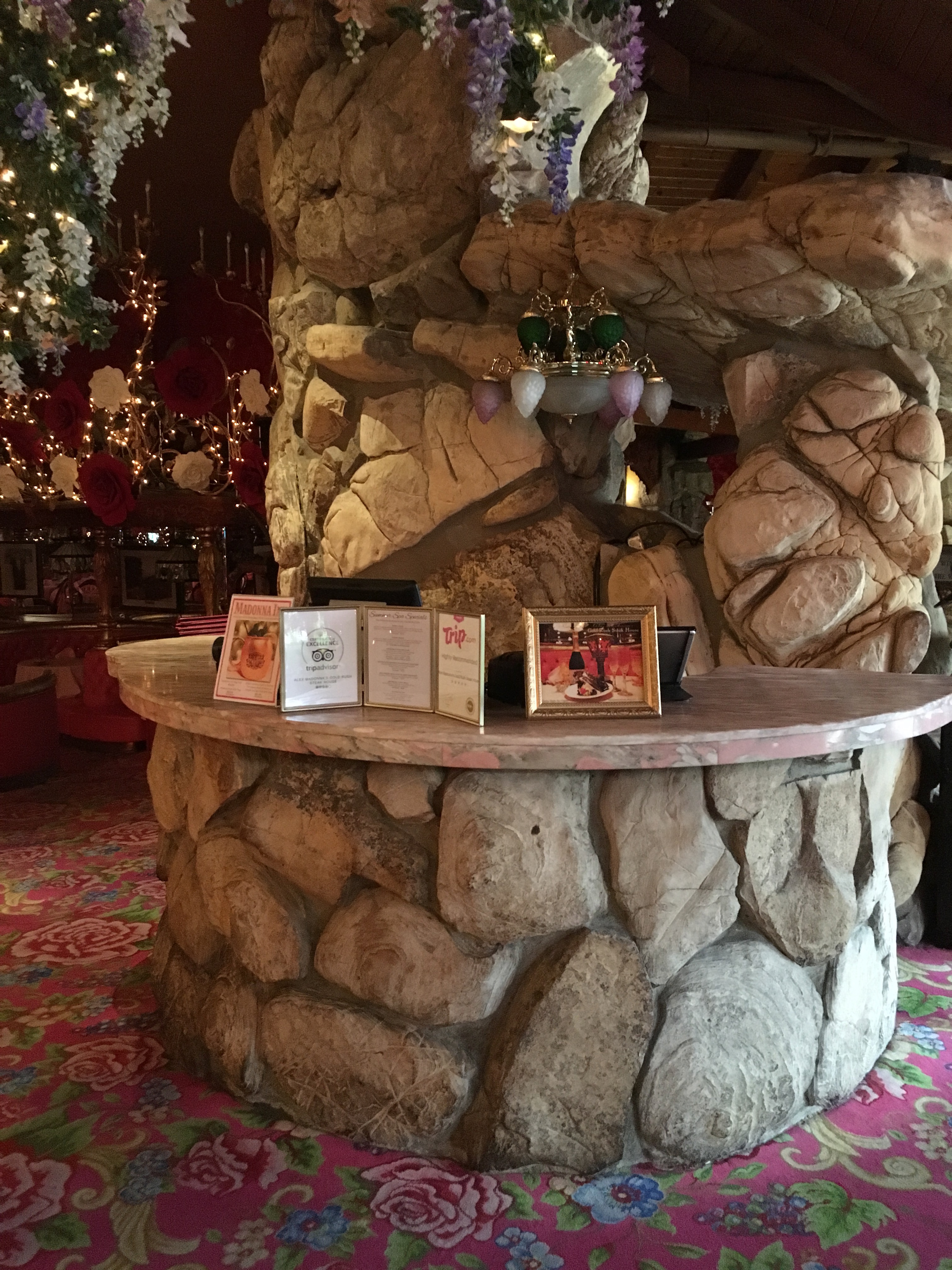 Hello creepy doll. It was an animatronic too. Shivers* 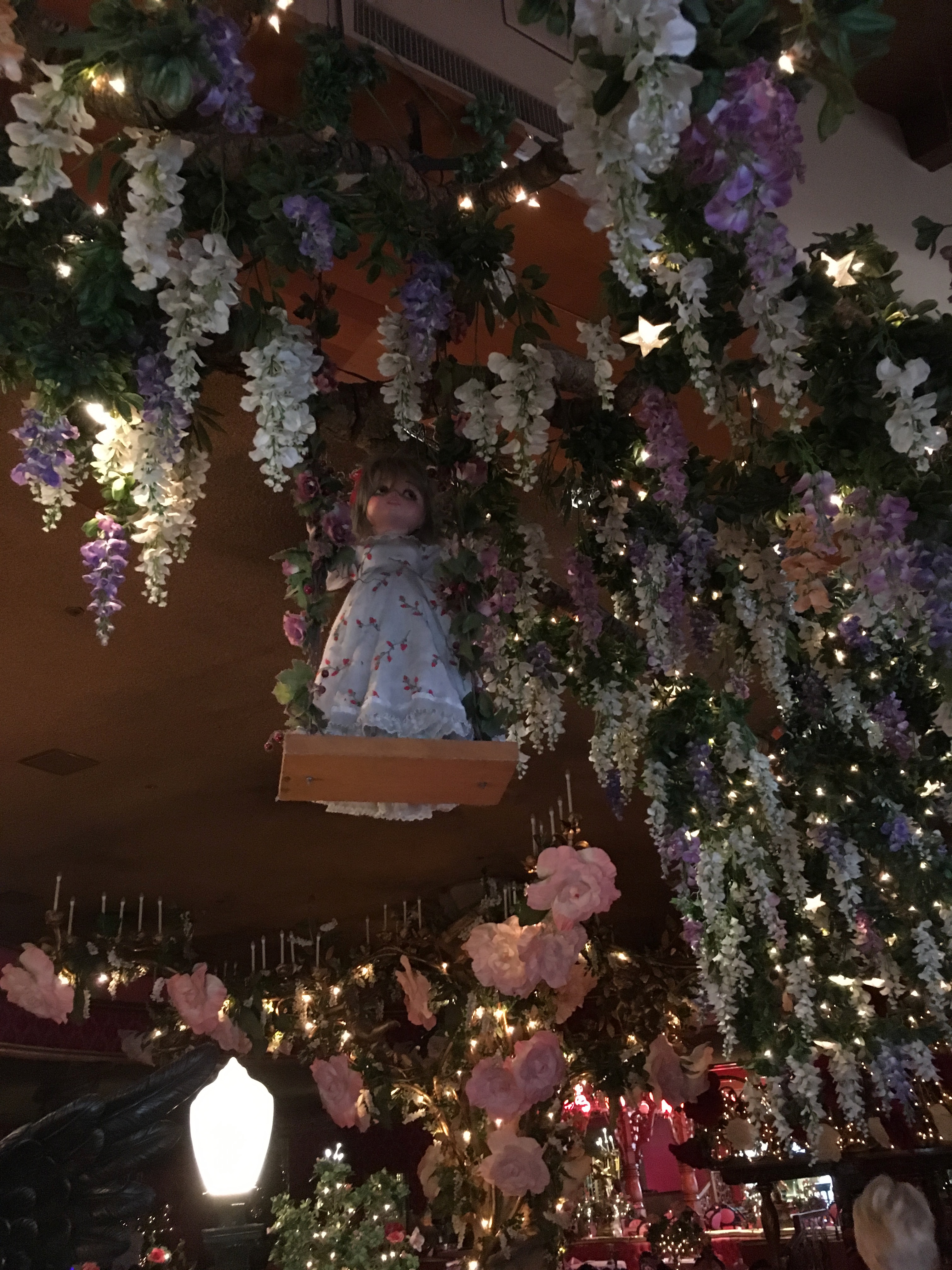 The restaurant was closed of course but look how kitsch it is! 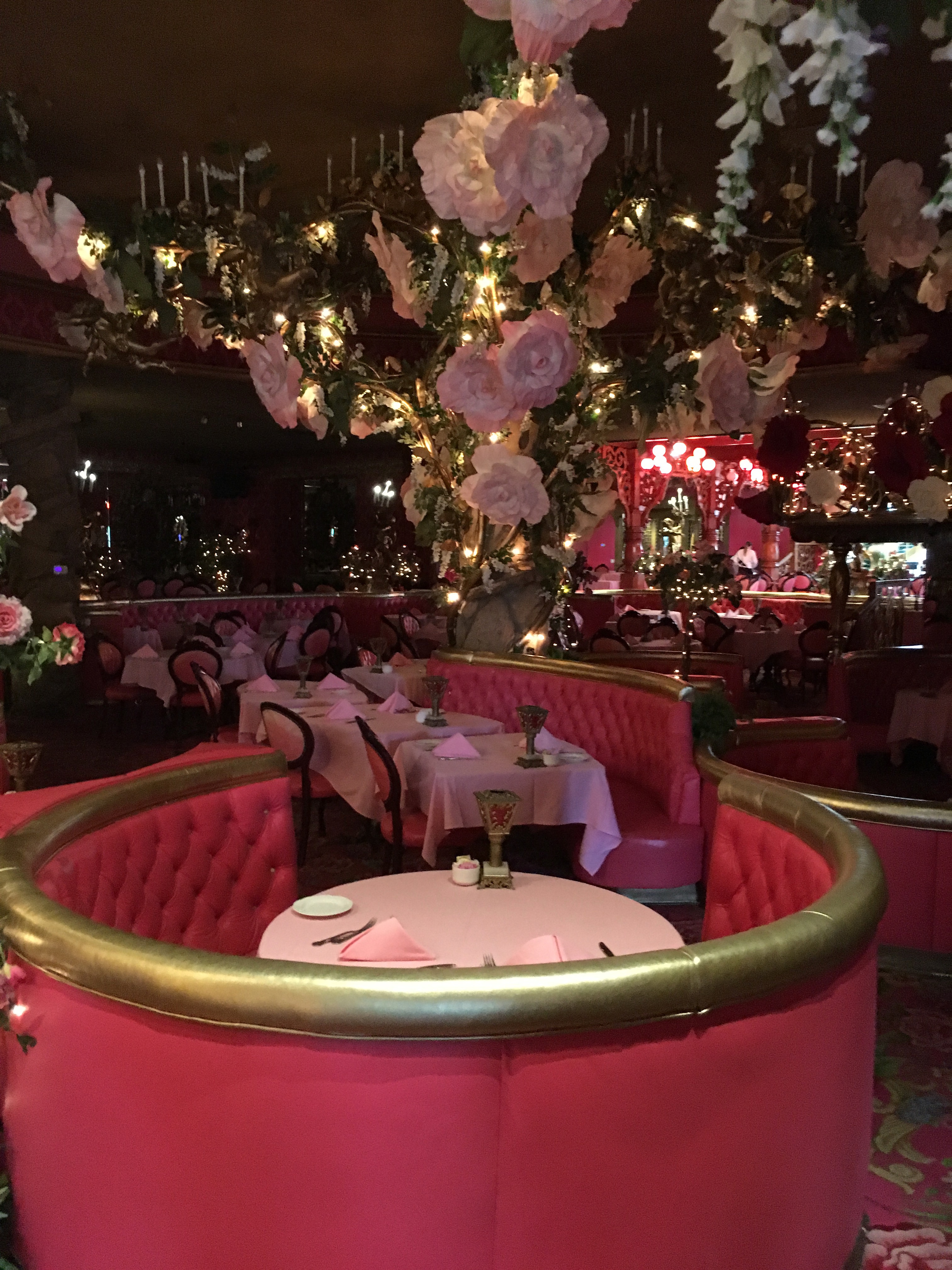 Below is the bar. 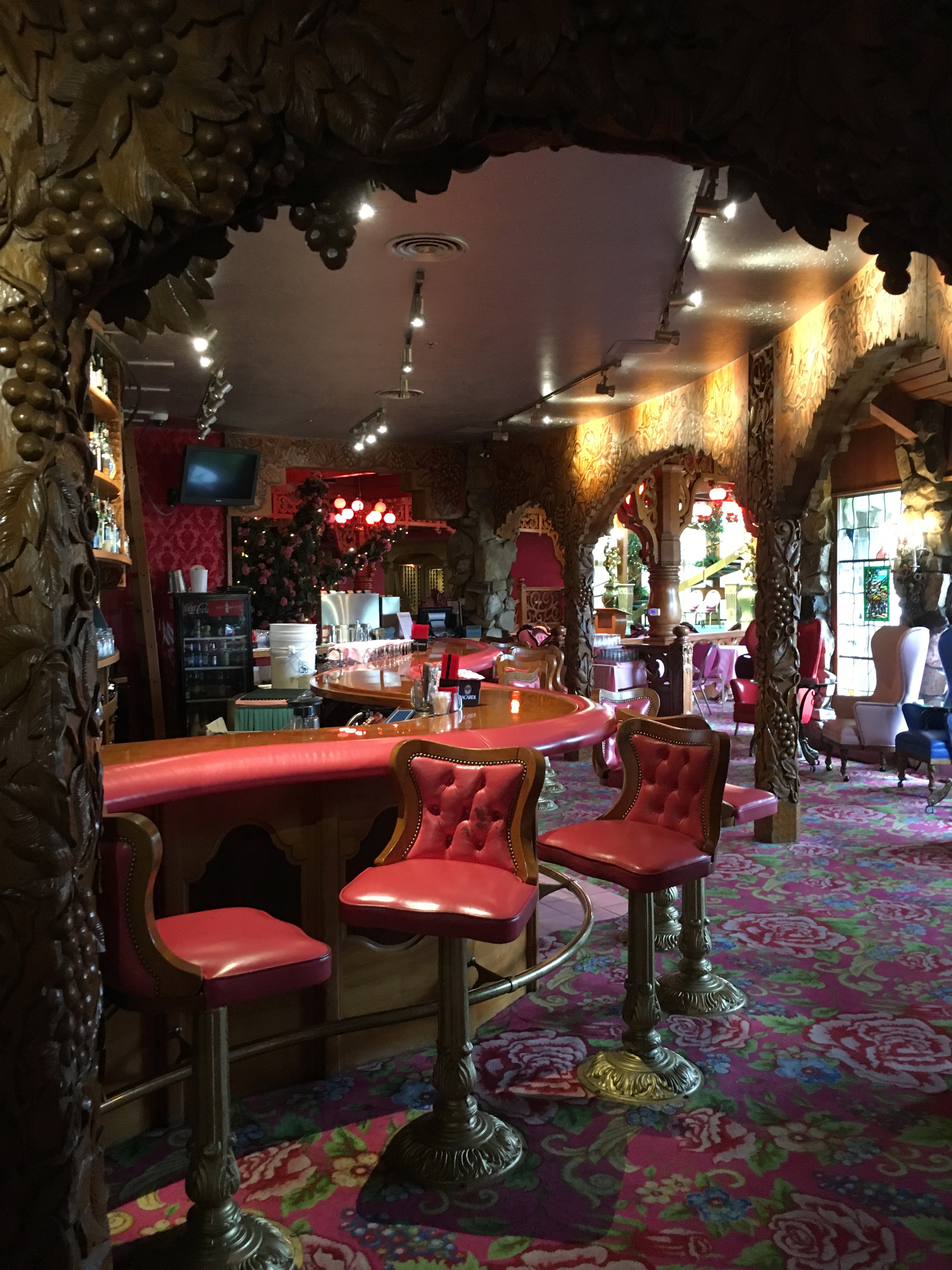 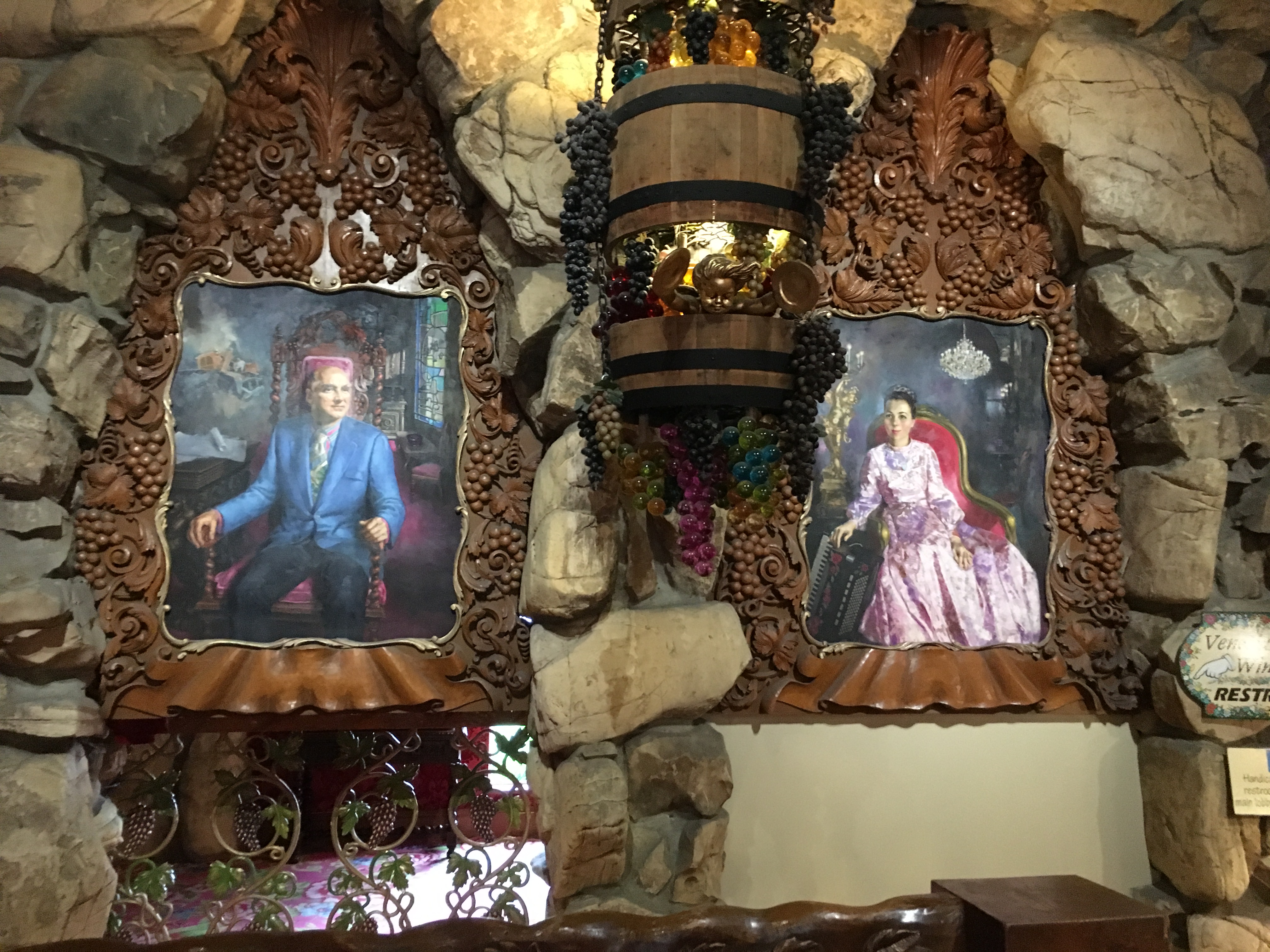 We headed into the basement where there is a wine cellar, gift shop, bathrooms and a candy cavern of course! 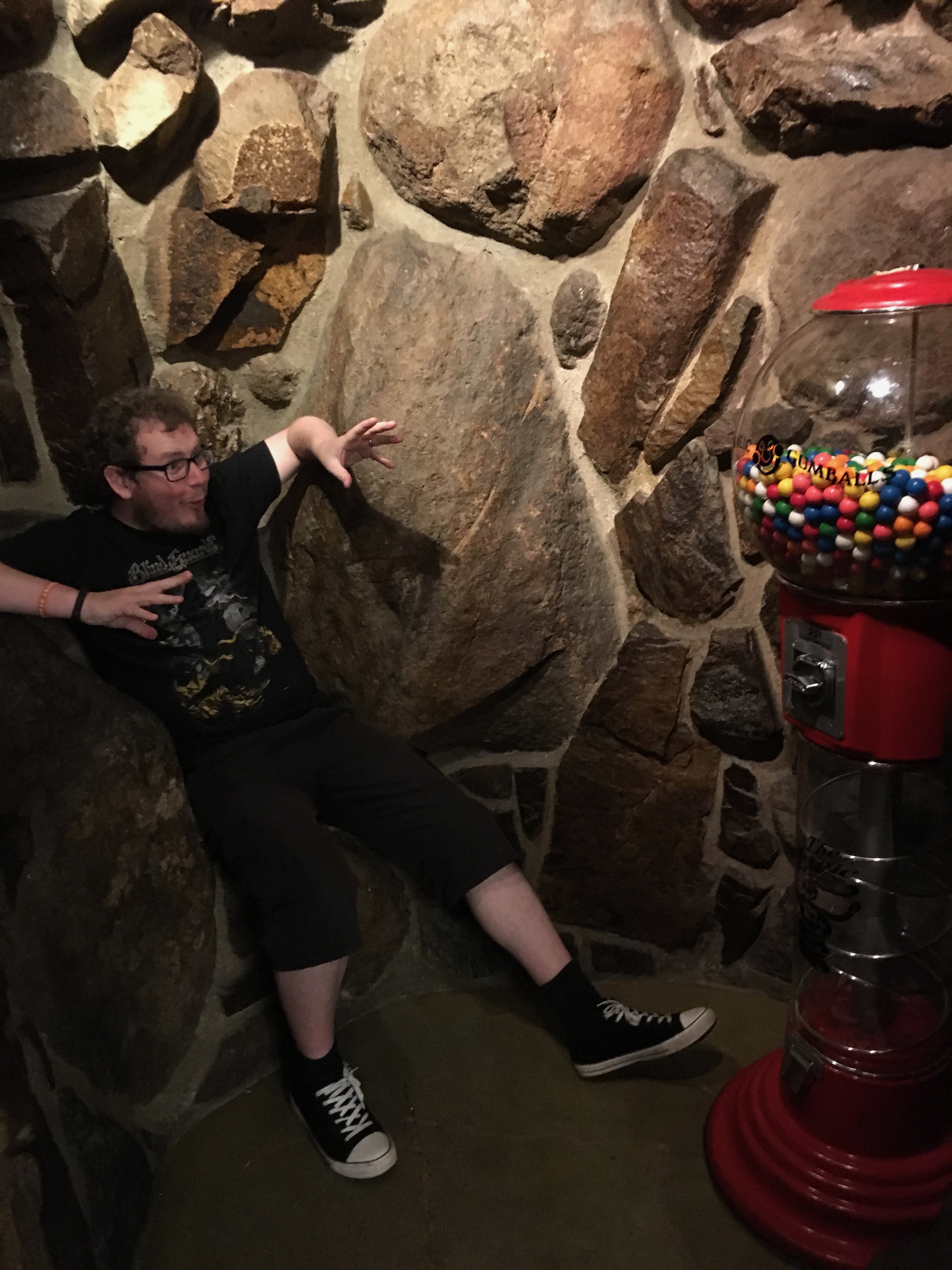 This is the ladies bathroom. Shiny wallpaper alert! 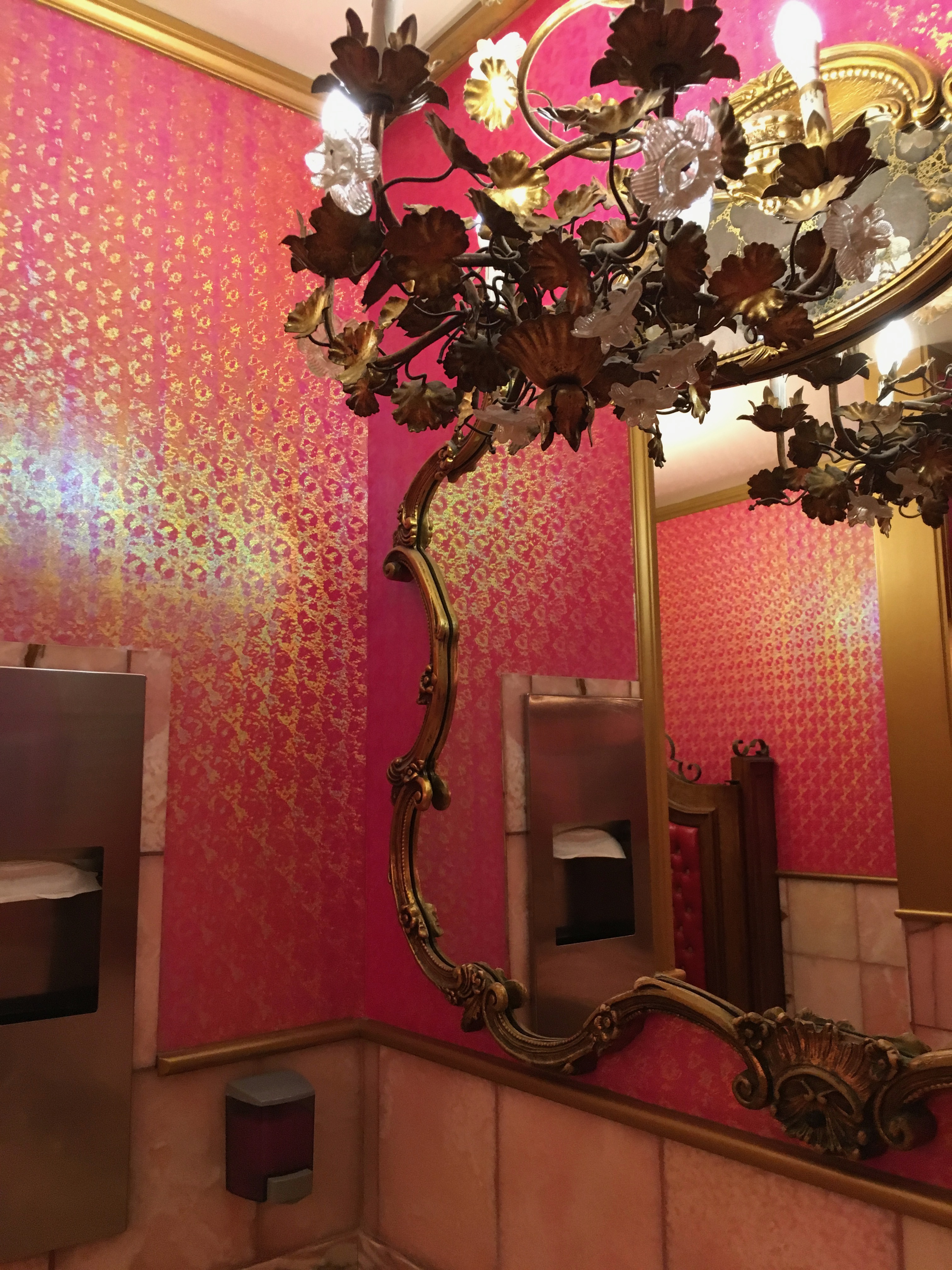 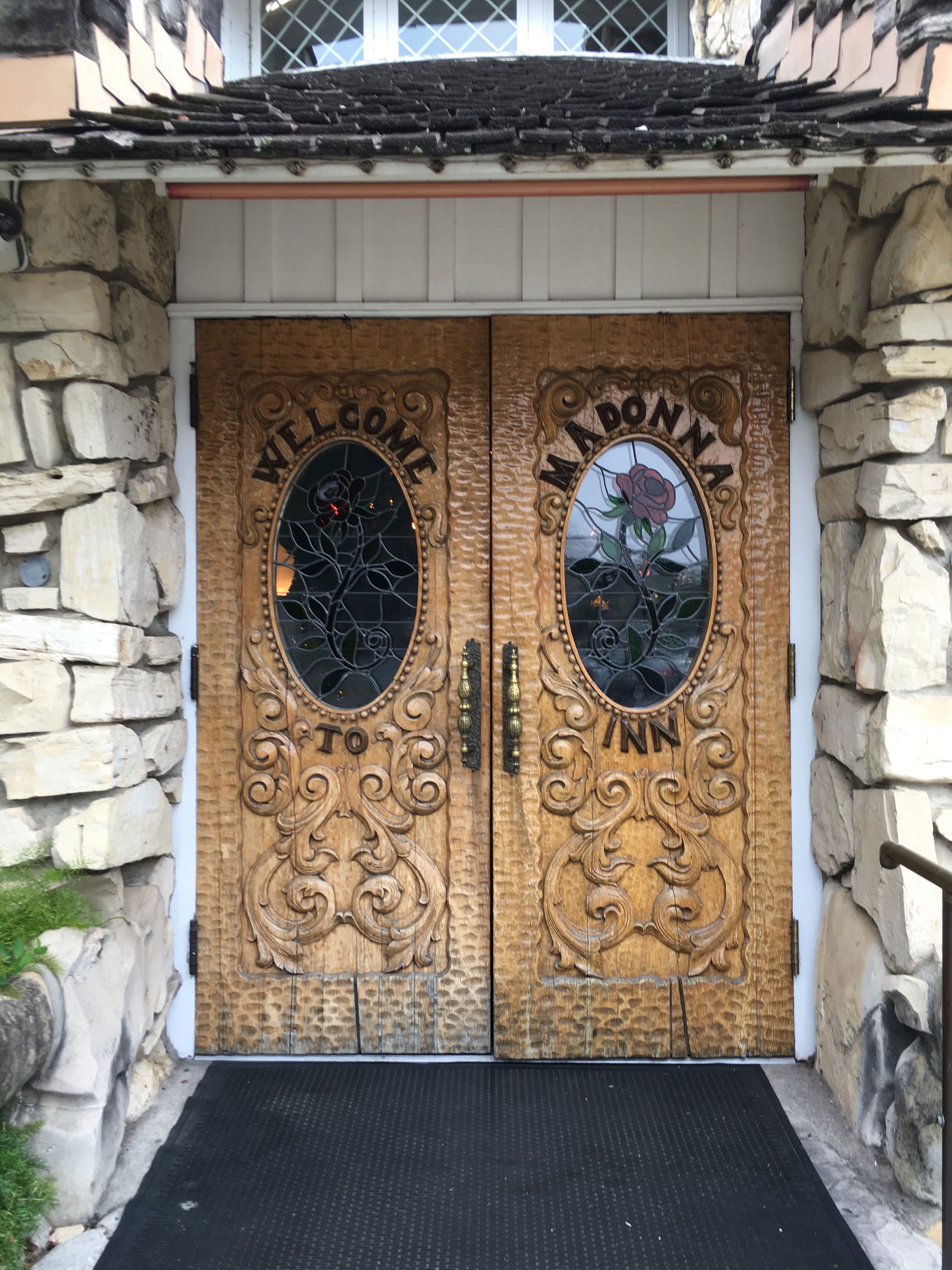 I’m so glad we came though I would definitely recommend coming for at least two nights so you can fully enjoy it. They have a spa and do horse riding among other things. There’s a pink tennis court too. 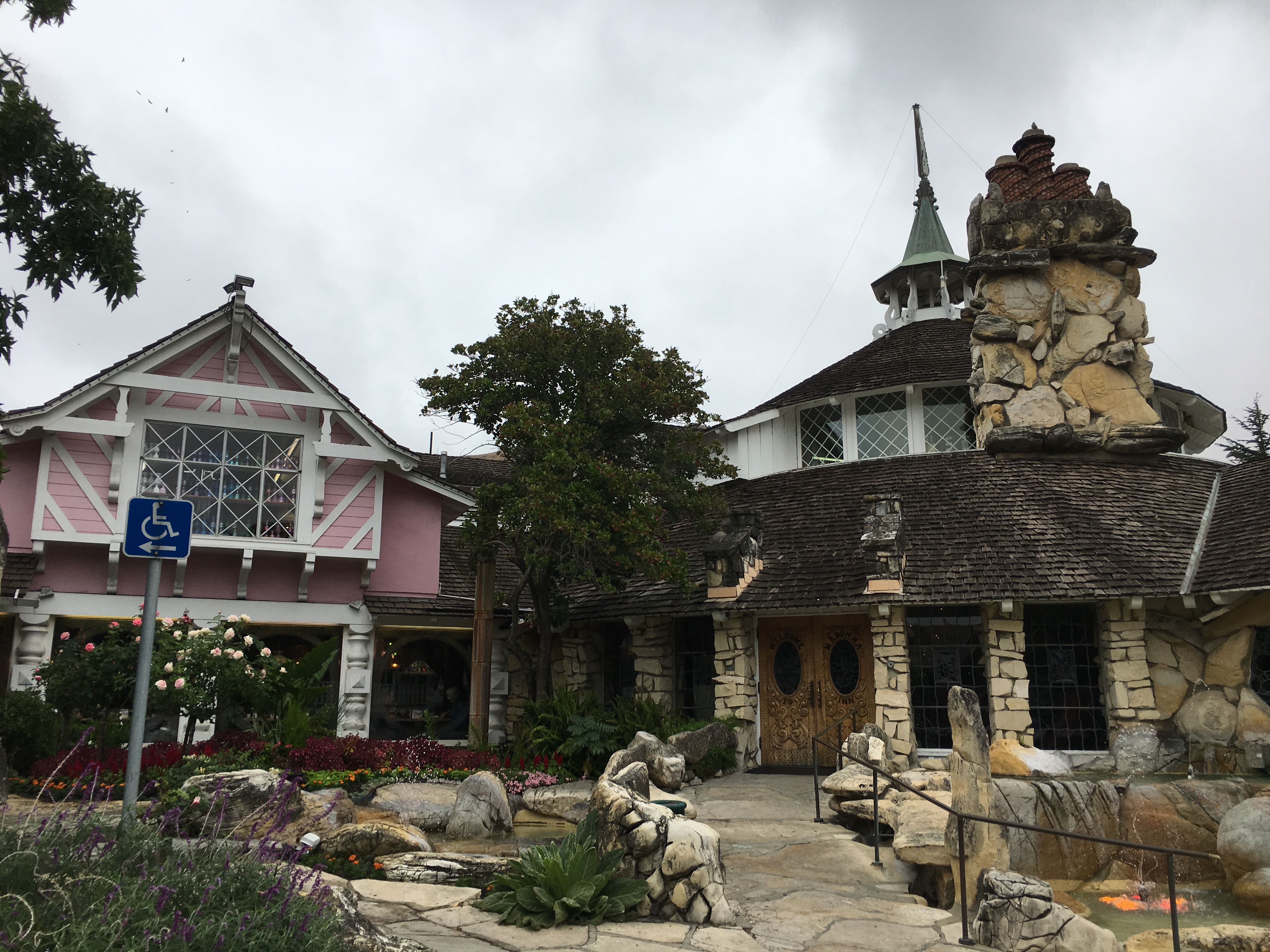 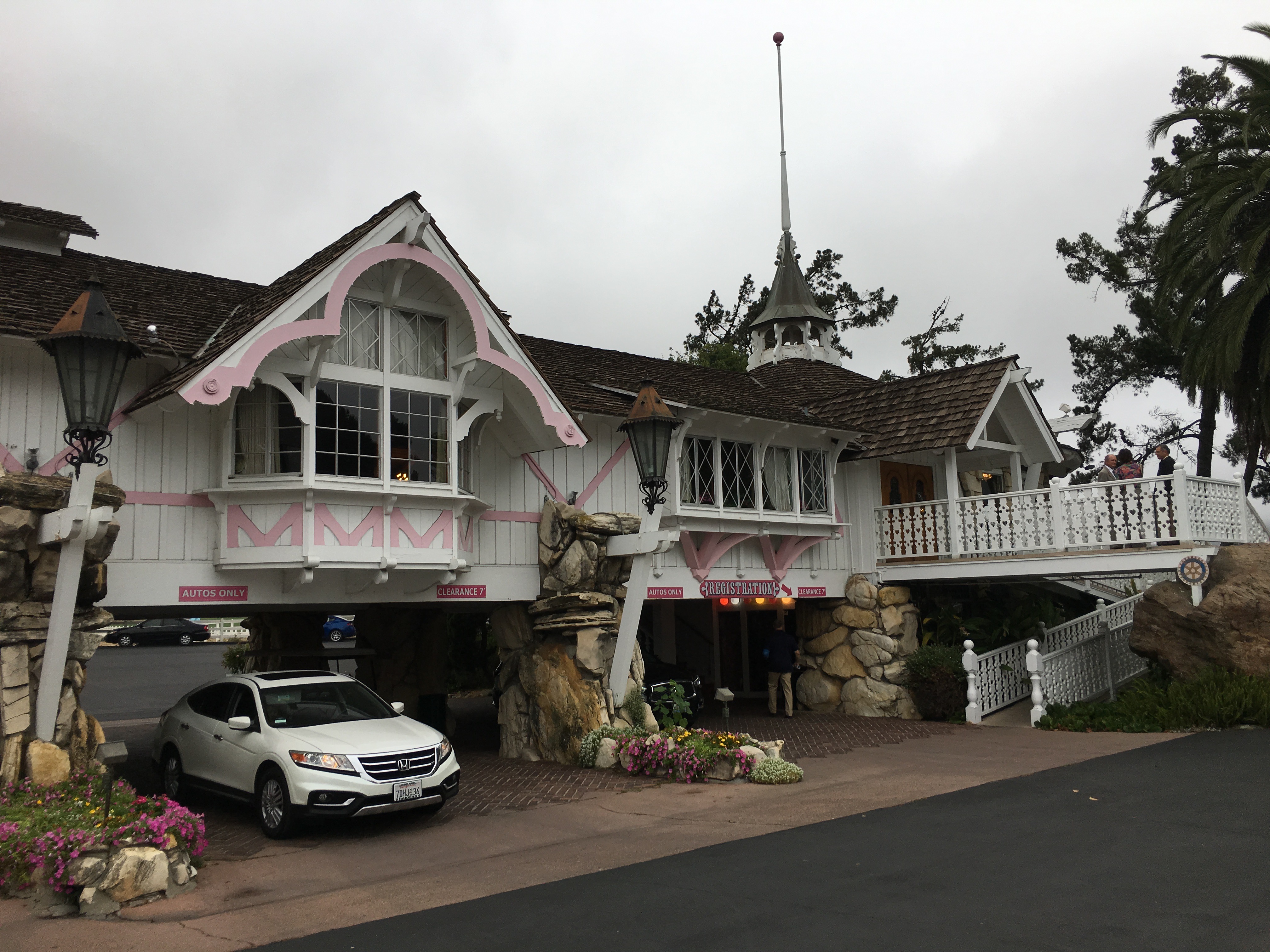 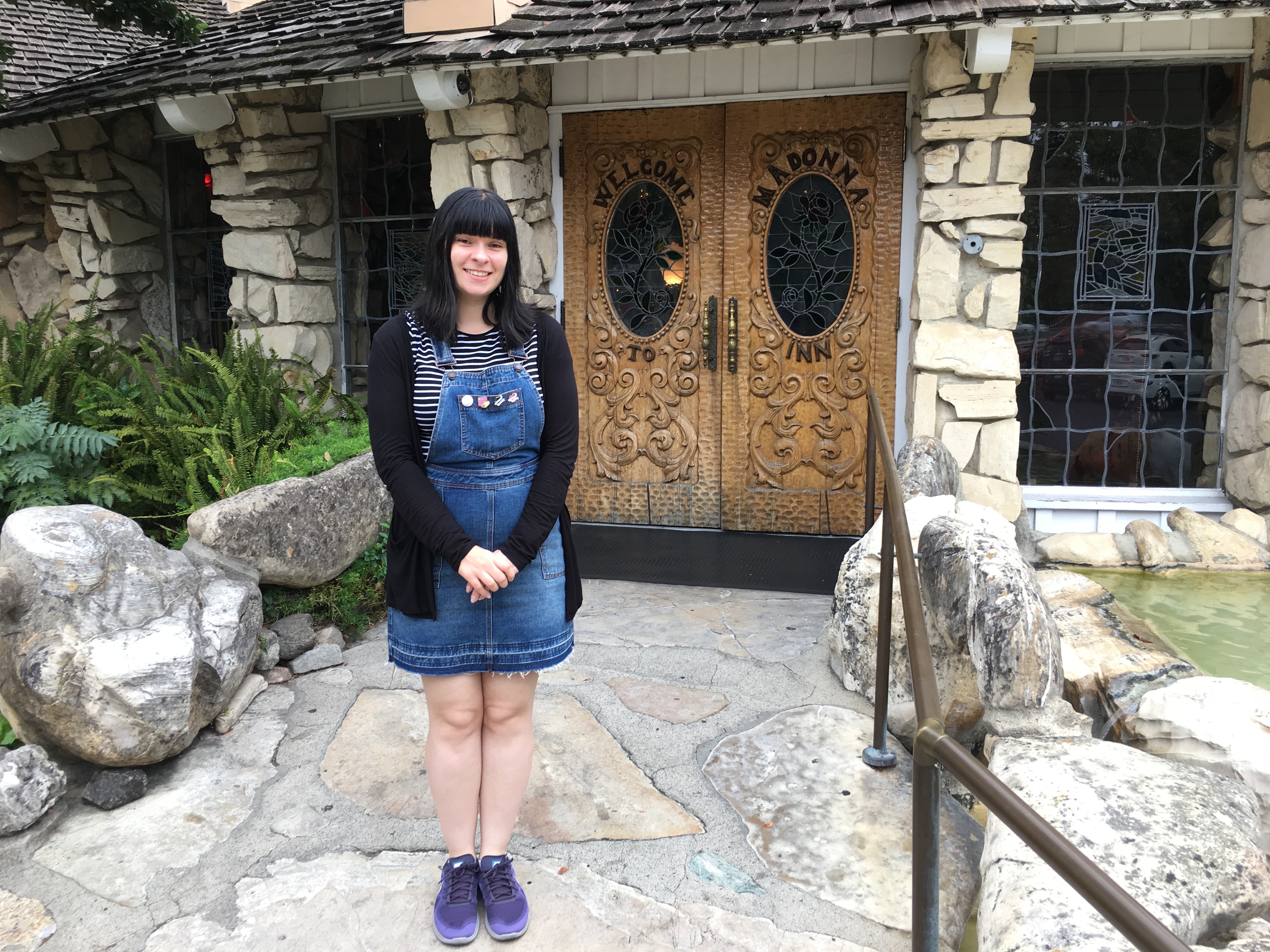 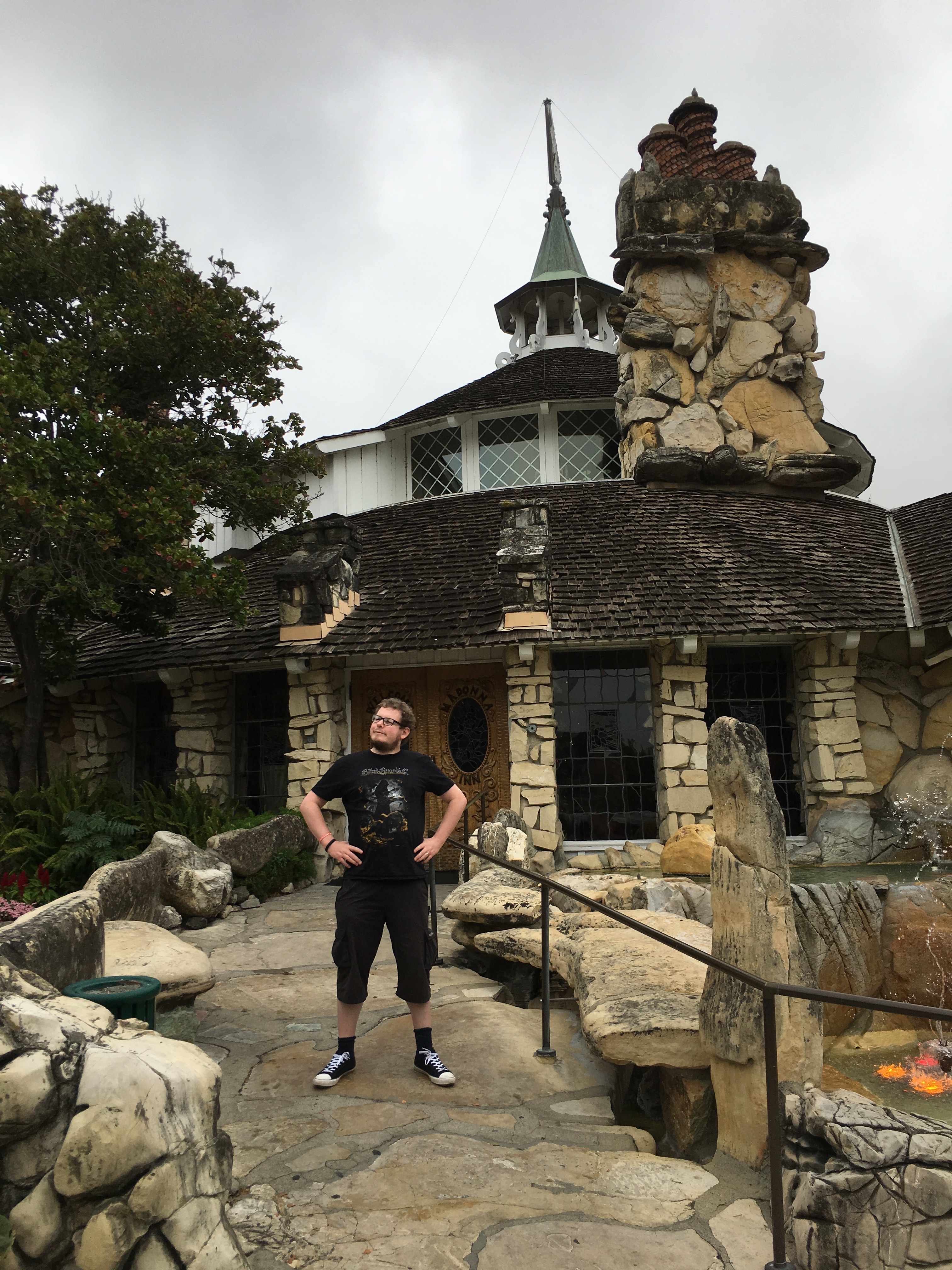 All checked out, we hit the road just after 10am to a much calmer trip. 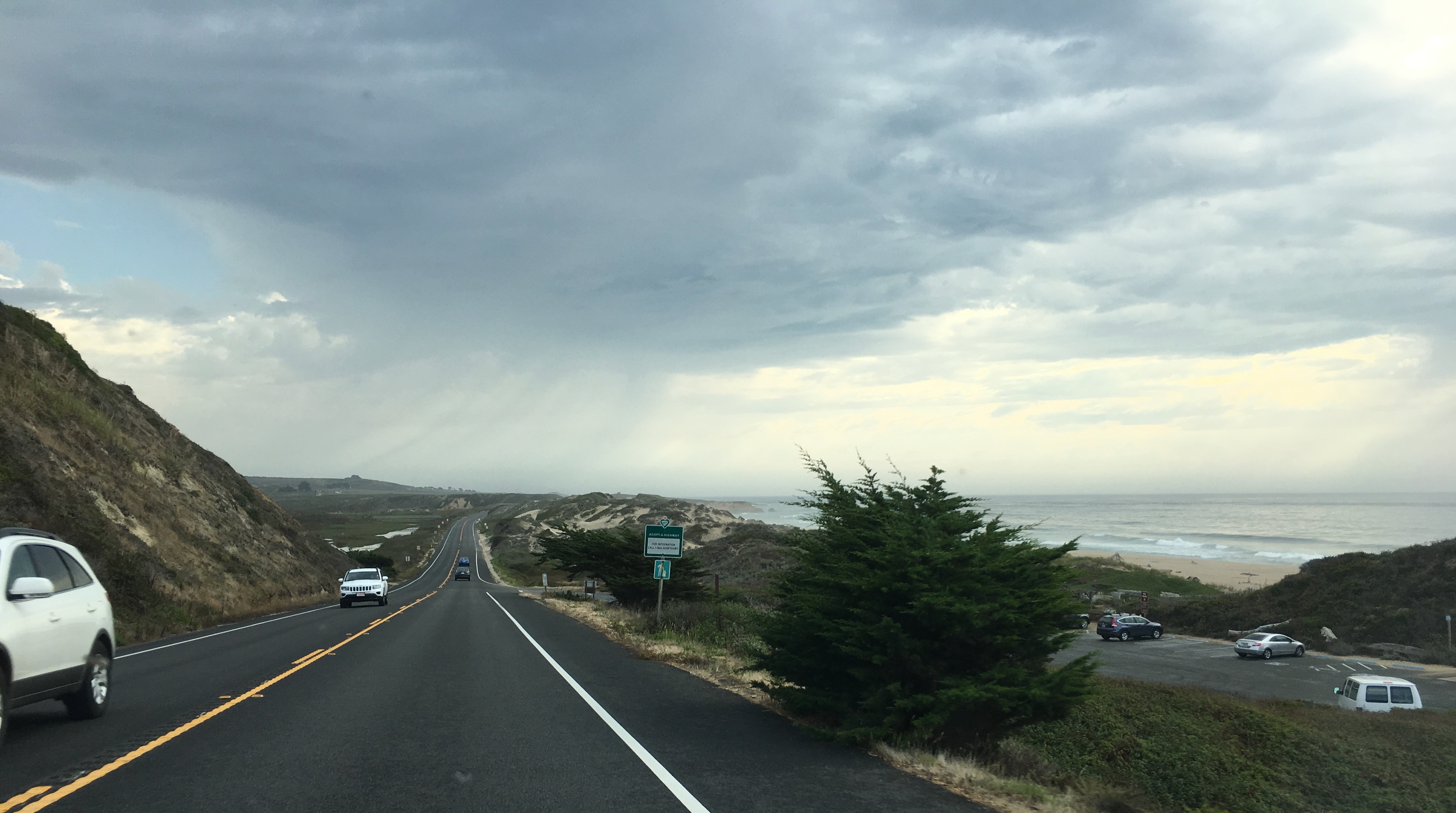 This one passed without incident. Probably because we took the direct route! It only took 3 hours so we arrived just in time for lunch. 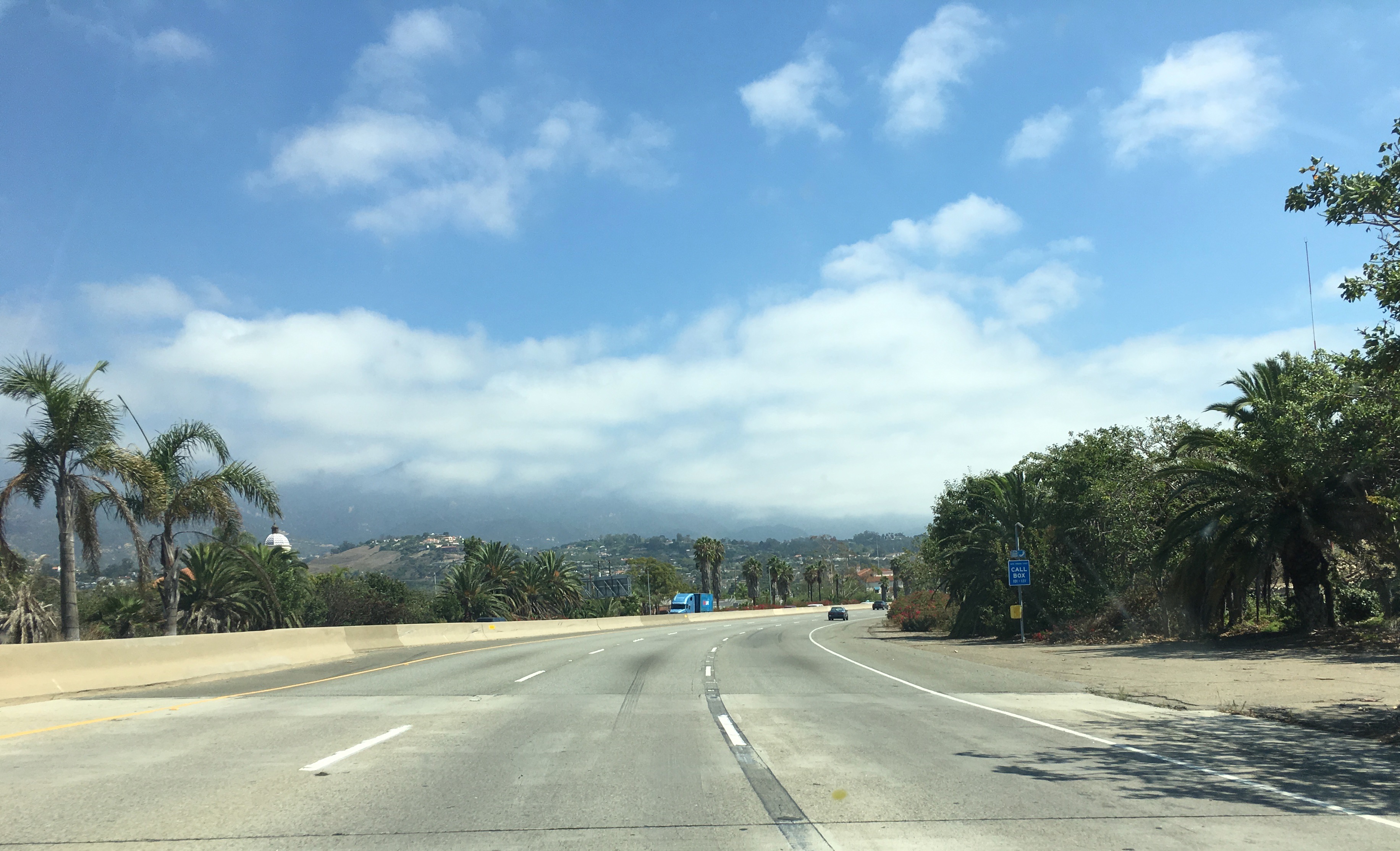 The next chapter is LA. Stay tuned!