It’s been awhile since I had breakfast at a hotel. When I was a kid and used to travel all the time with my family I used to LOVE them and I mean love. So when I was invited to a complimentary breakfast at Worsley Park Marriott Hotel & Country Club I eagerly accepted. It is the most important meal of the day after all!

The location of Worsley Park Marriott is great if you’re driving. Situated just off the M60 it’s so easy to find and within minutes you’re surrounded by greenery. Perfect if you want to travel to Manchester but don’t want all the hustle and bustle of the city centre. 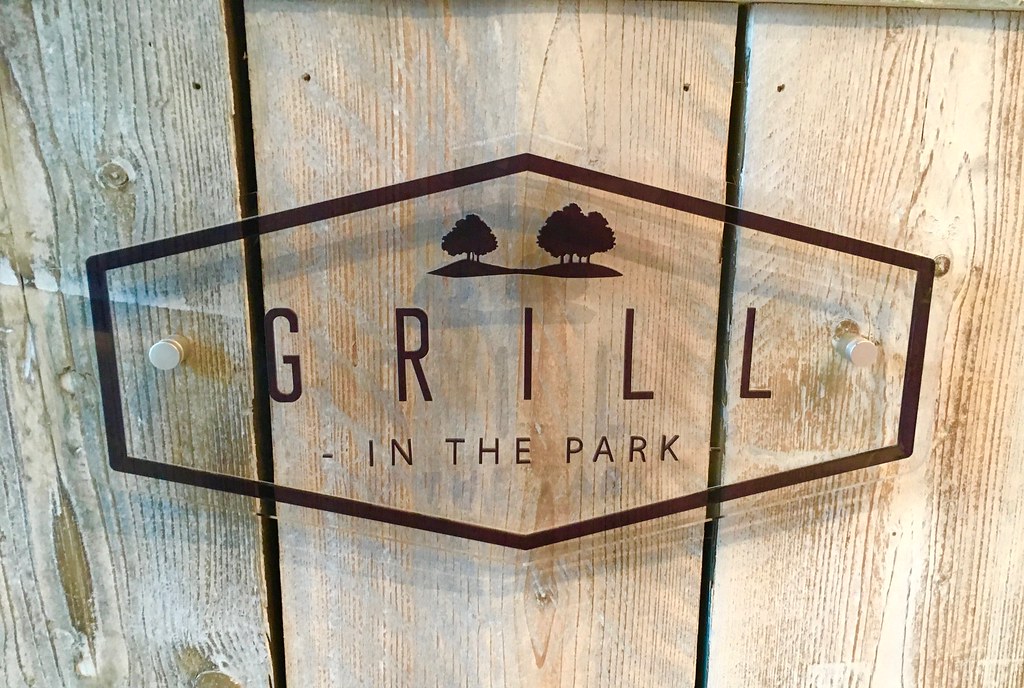 Breakfast at the Marriott is served at their Grill in the Park restaurant between 6.30am and 11am on weekdays and 7am – 11am on the weekends. If you’re staying at the hotel, it’s only £10 for breakfast and if you’re not it’s £16 for the buffet and £12 for continental.

Walking through the hotel to get to the restaurant, I could definitely tell I was in a Marriott. I’ve been to Marriott’s before but never this particular one so I definitely felt that it fit in with the chain’s ‘vibe’. 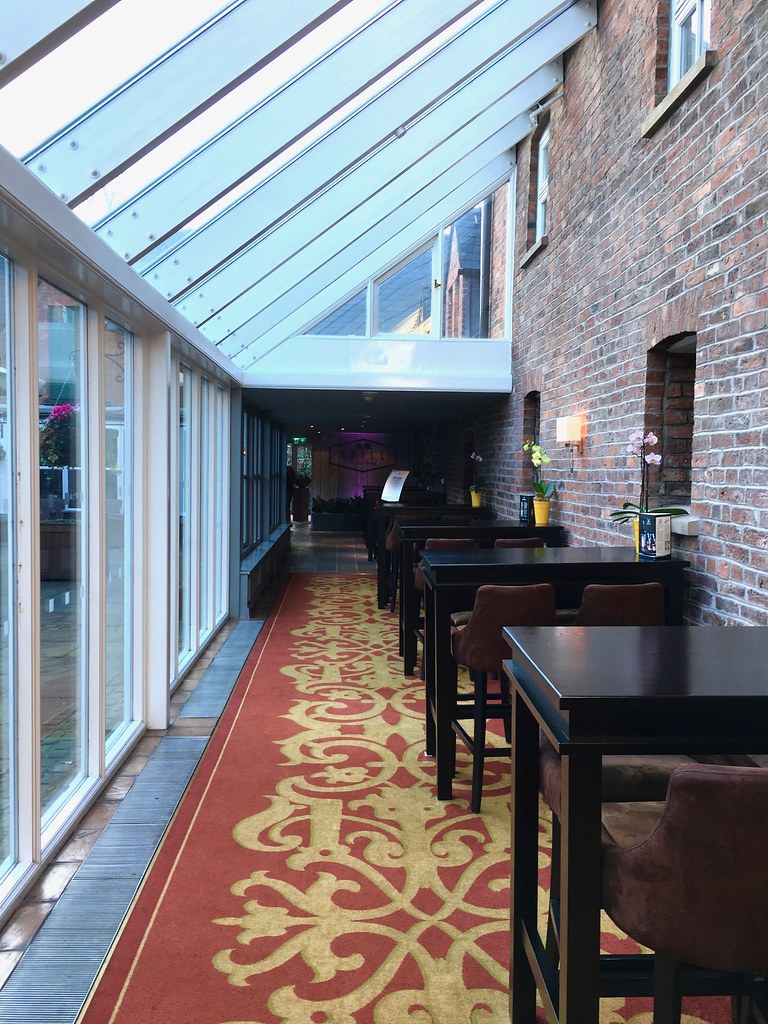 Part of the restaurant looks out onto this courtyard. Though it was freezing being January and all, I can tell it would be amazing sitting out there during the summer. Is it summer yet? 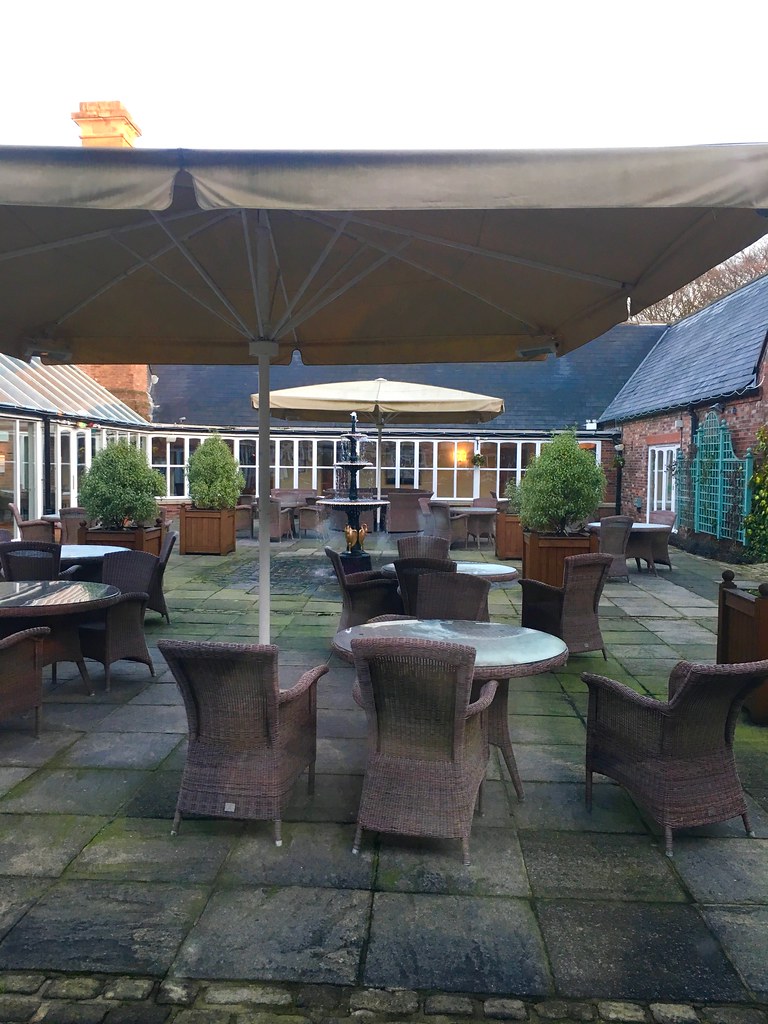 I showed up early so I got to have a wander around the buffet first without there being too many people around.  Buffet strategy is a must with me. I like to case the joint. With my courses decided, I began my feast. 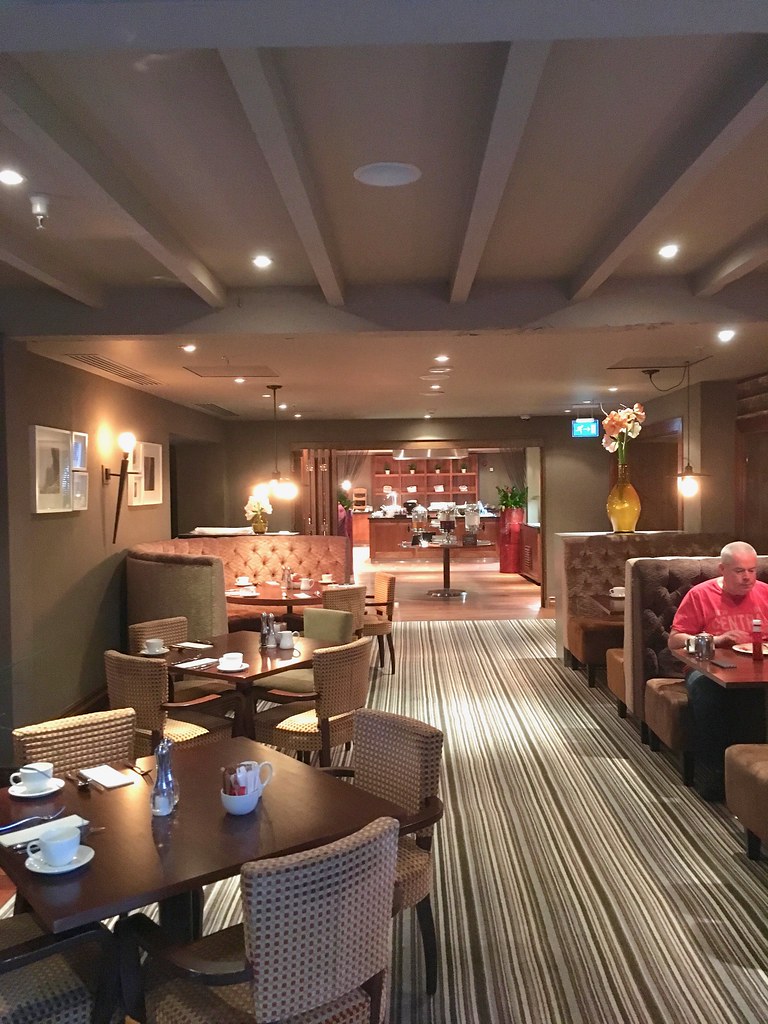 Apologies for the dark photos below, in hindsight I should have sat next to the window with natural light being a bloggers best friend and all but I wanted to be close to the food. Priorities right? But even though the lighting was terrible for photos, most normal people aren’t looking to take photos so it was ideal for that first thing in the morning, I haven’t had my coffee yet crowd. 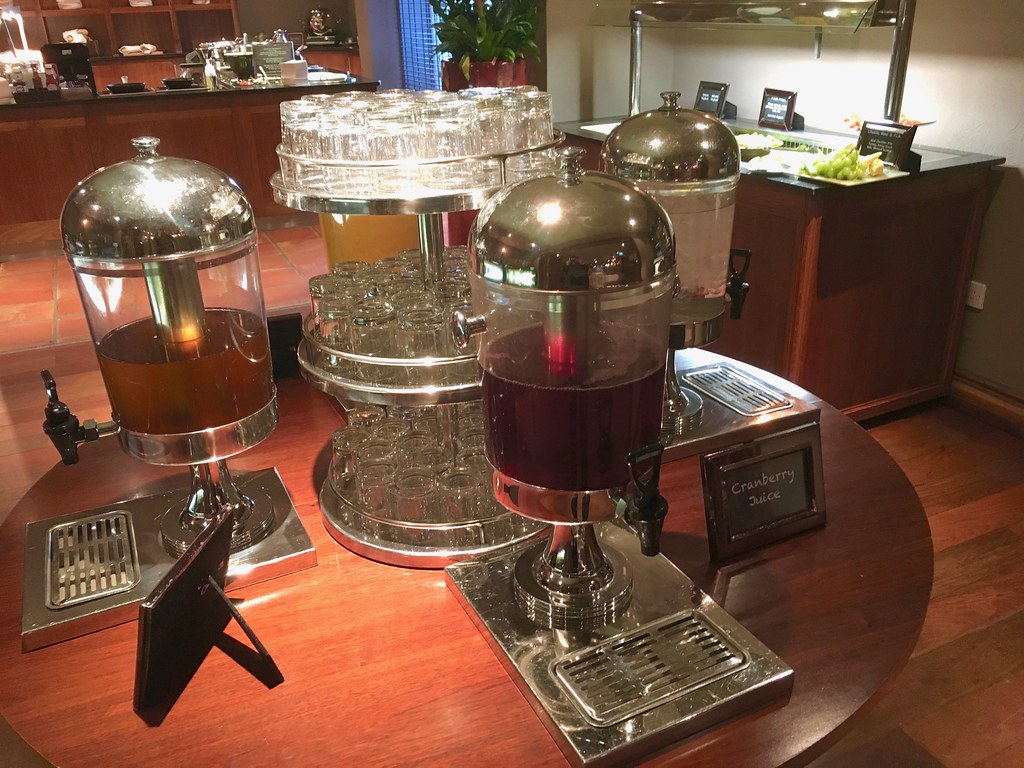 So first up is juice of course. Big thumbs up to the Marriott for having more than just orange juice. I’m not a fan of OJ so I tried some cranberry. A lot of hotels have been catching on to offering multiple juices but every once in awhile I stumble across one where I have to get tap water. 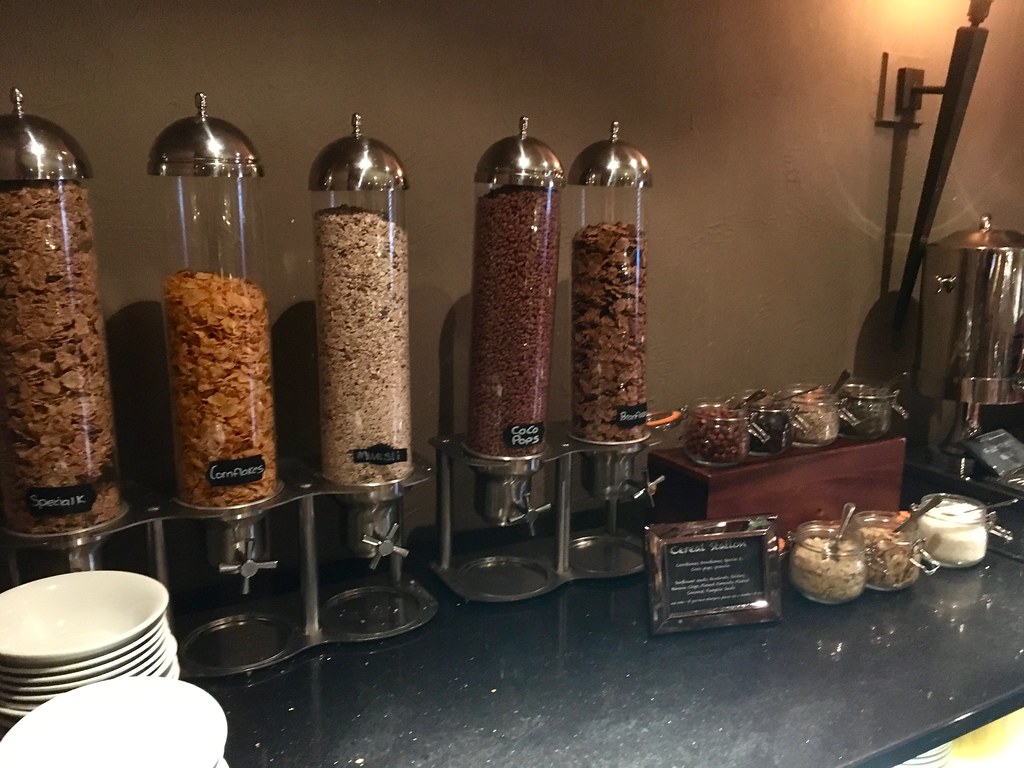 As well as the cereal that was on offer, I also noticed that they have toppings like hazelnuts, seeds and dried fruit. I’ve never seen that before though I’m not usually a cereal person but it was a nice touch. Instead, I headed to the toast. 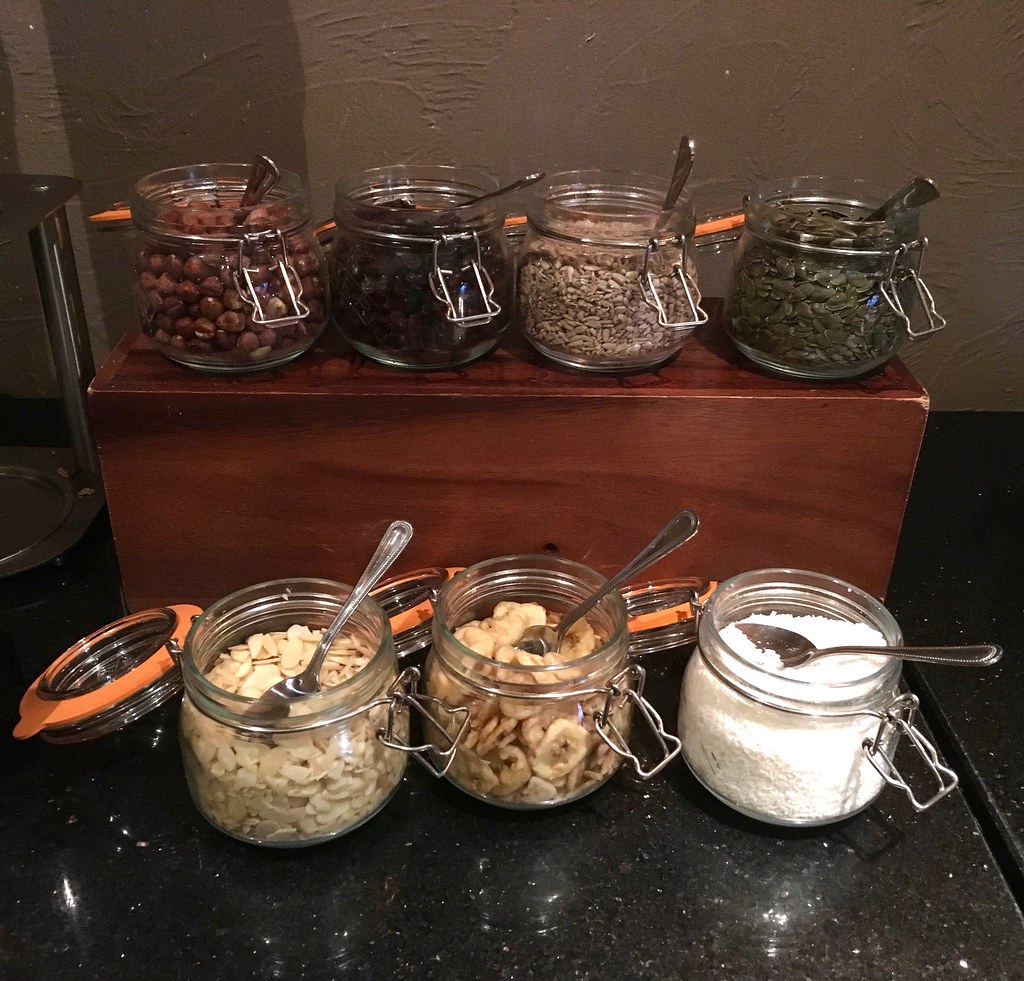 I can’t speak for the strawberry or blackcurrent jam but the apricot was delicious! As for the mandarin, I wasn’t a fan but it’s nice to see so much choice. 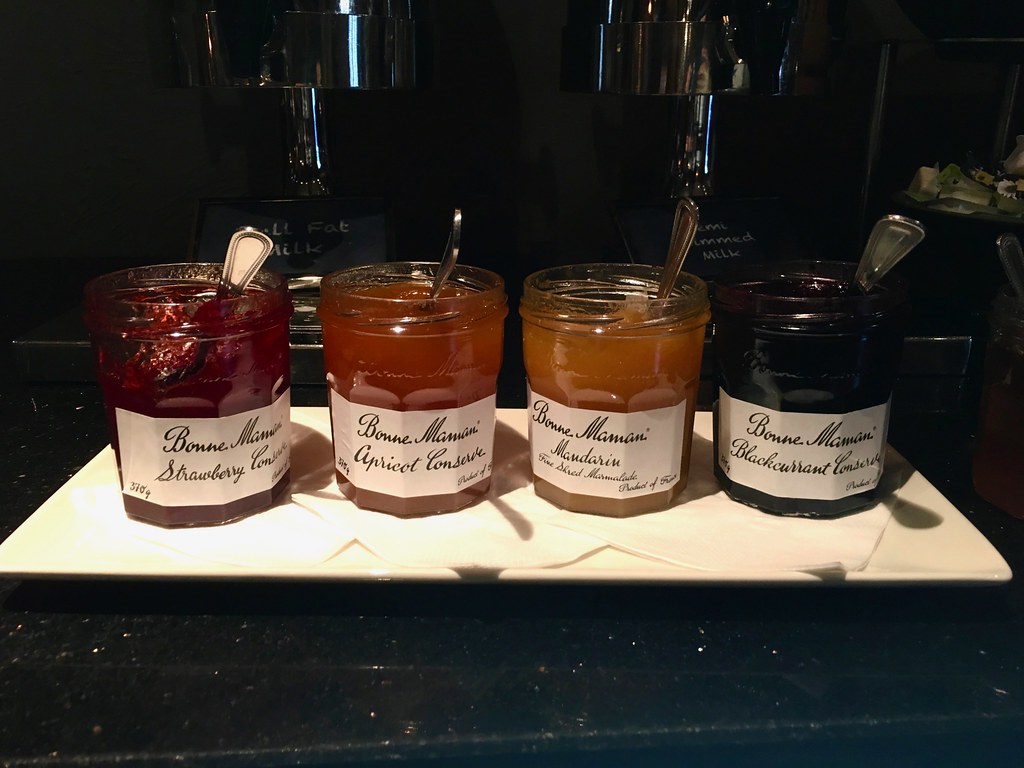 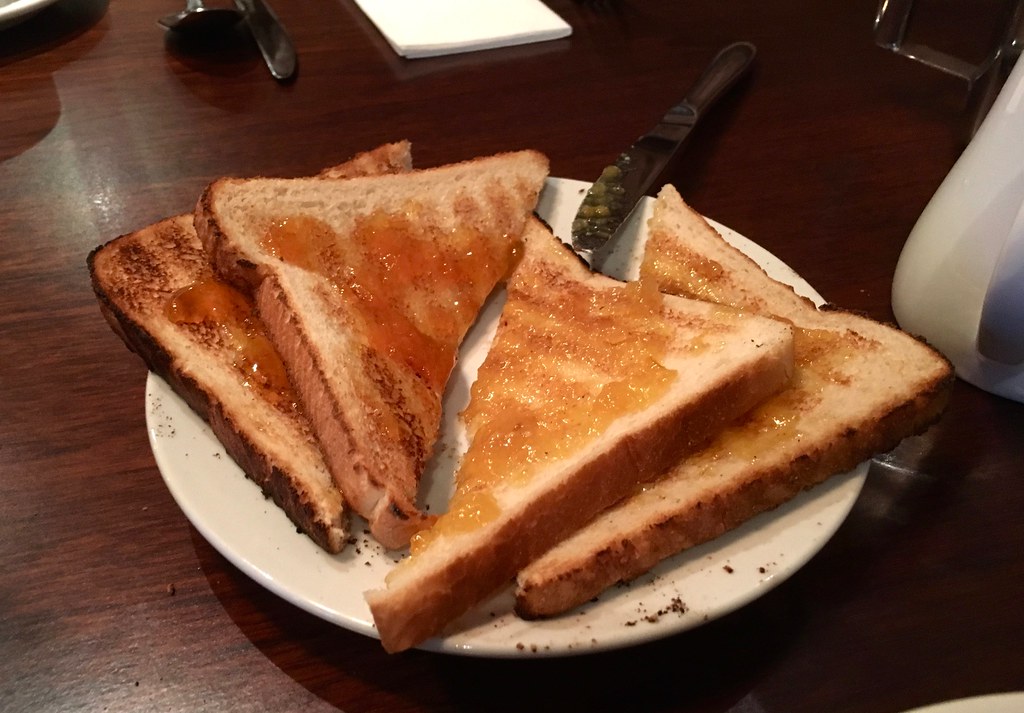 As standard with any hotel breakfast, you can order coffee or tea right to your table. Sweet sweet caffeine! 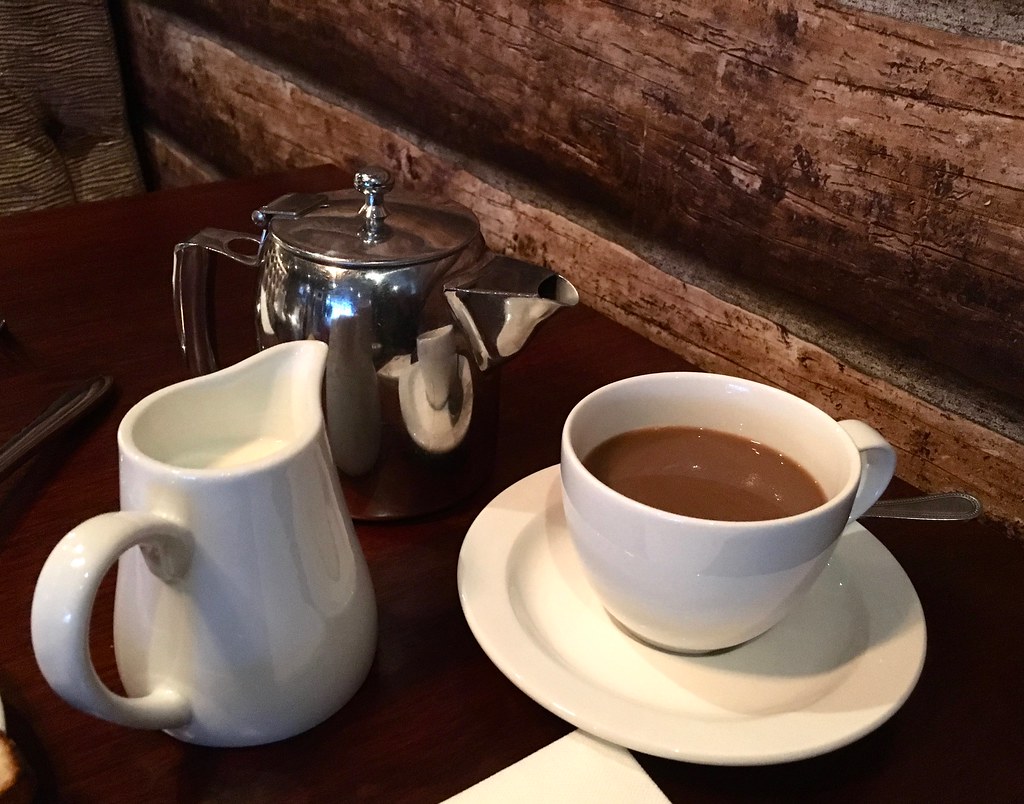 Speaking of choice earlier, I had a difficult one to make when it came to the fruit. In the end I decided on the berries and greek yoghurt which was really good. 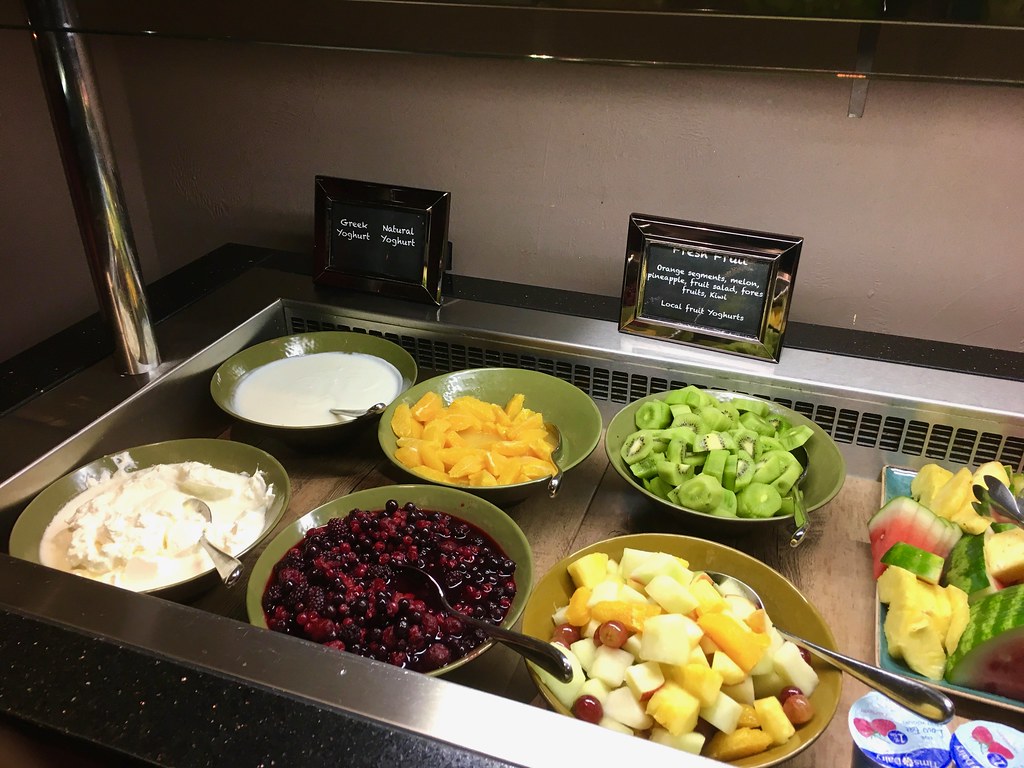 I’ve seen cold meat at a breakfast buffet before but never smoked salmon. And I am obsessed with smoked salmon so it was a welcome surprise. I decided to save that for part of my main course. Also it was definitely a first for me to see a cheese board which I think is awesome. Maybe other places do offer them but I’ve never spotted any. 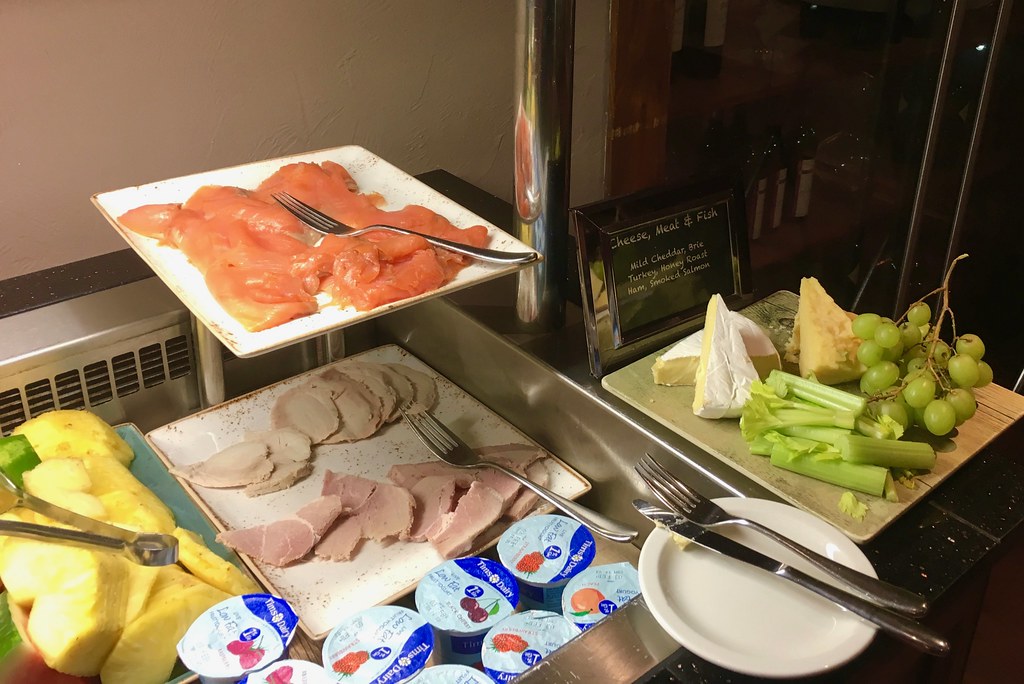 Course one and two demolished. 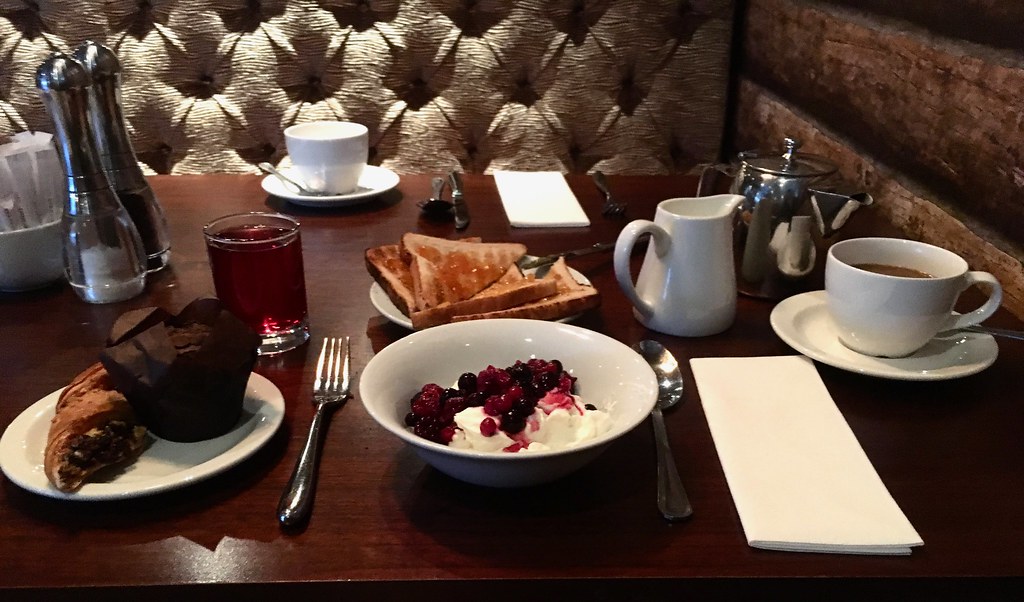 As for hot food, you can get the full english here which is a must for a UK breakfast buffet. I should also mention that there is also a menu where you can order items like pancakes a la carte.

Now when it comes to me personally, I usually stumble at the hot section at most breakfast buffets due to not eating pork. That and I’m not really a fan of beans or cooked tomatoes either… so I’m usually left with eggs on toast and a hash brown.

That wasn’t a problem at all here. Worsley Park Marriott are well known for their omelette station where you can get just about anything you want thrown in and cooked right in front of you. 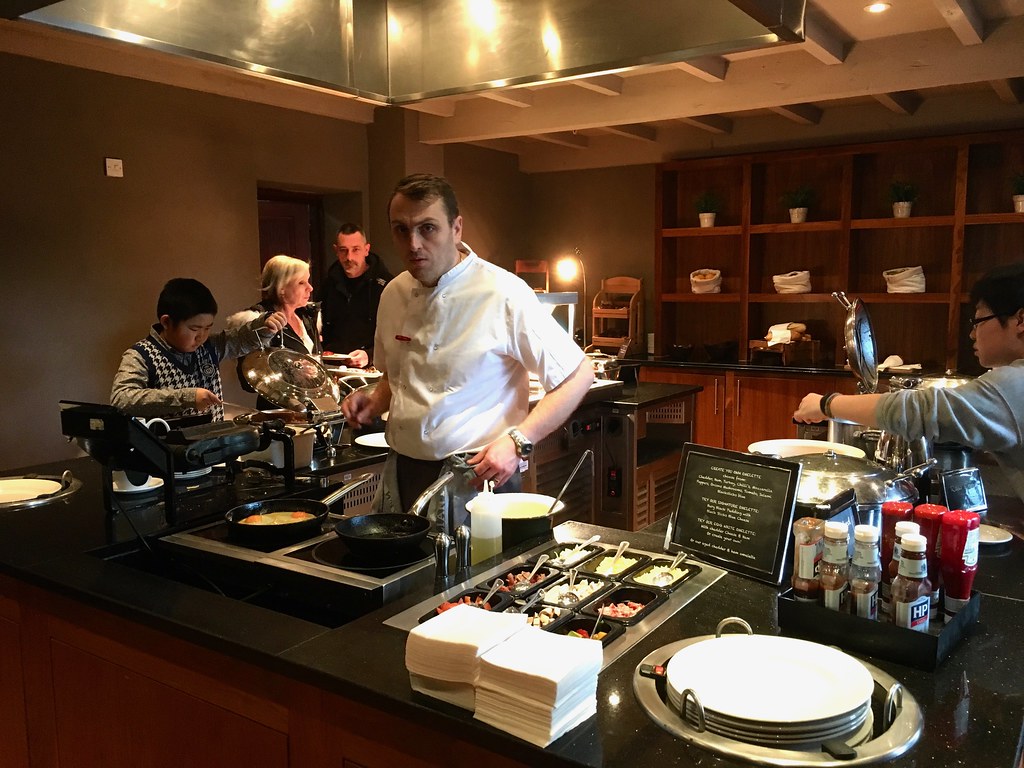 However, as tempting as the omelettes looked, I had already spotted the smoked salmon earlier. So I popped some on toast and helped myself to a couple of poached eggs from the buffet. Perfect! 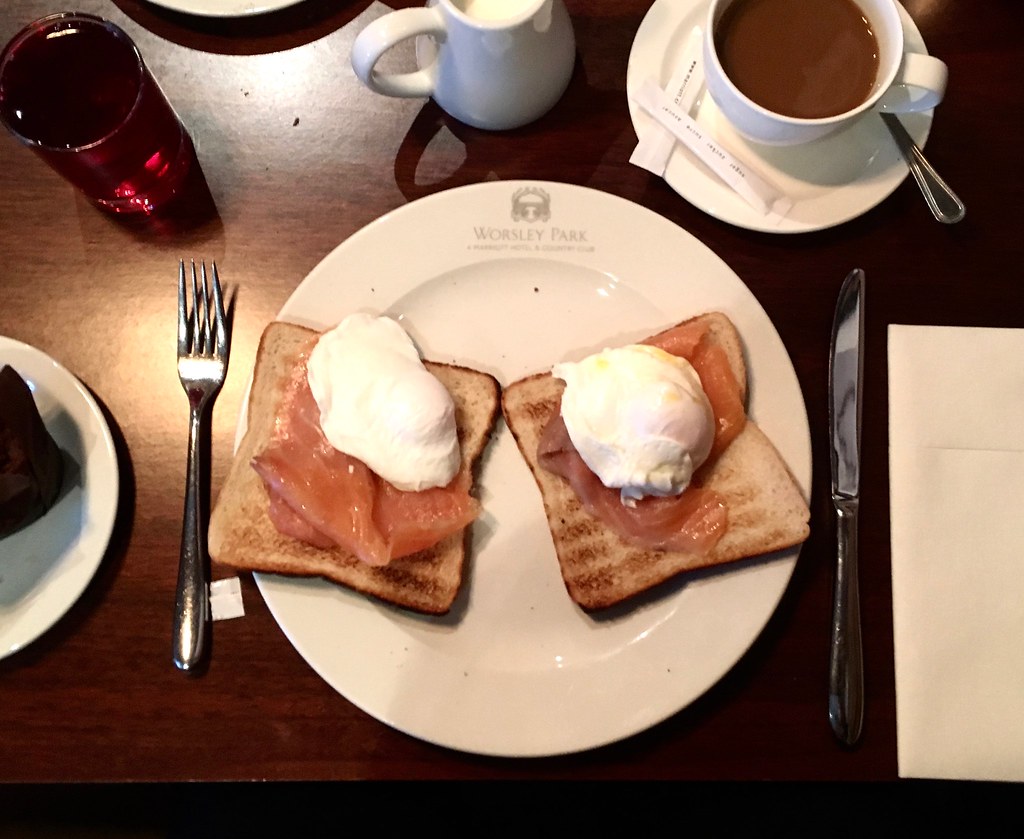 Finally for dessert, I had perused the pastry and muffin section and found my winners. Though there was no pain au chocolat which is usually a must for me, this chocolate pastry I picked up instead was amazing! and the muffin was also very tasty. The perfect end to the meal with my coffee. 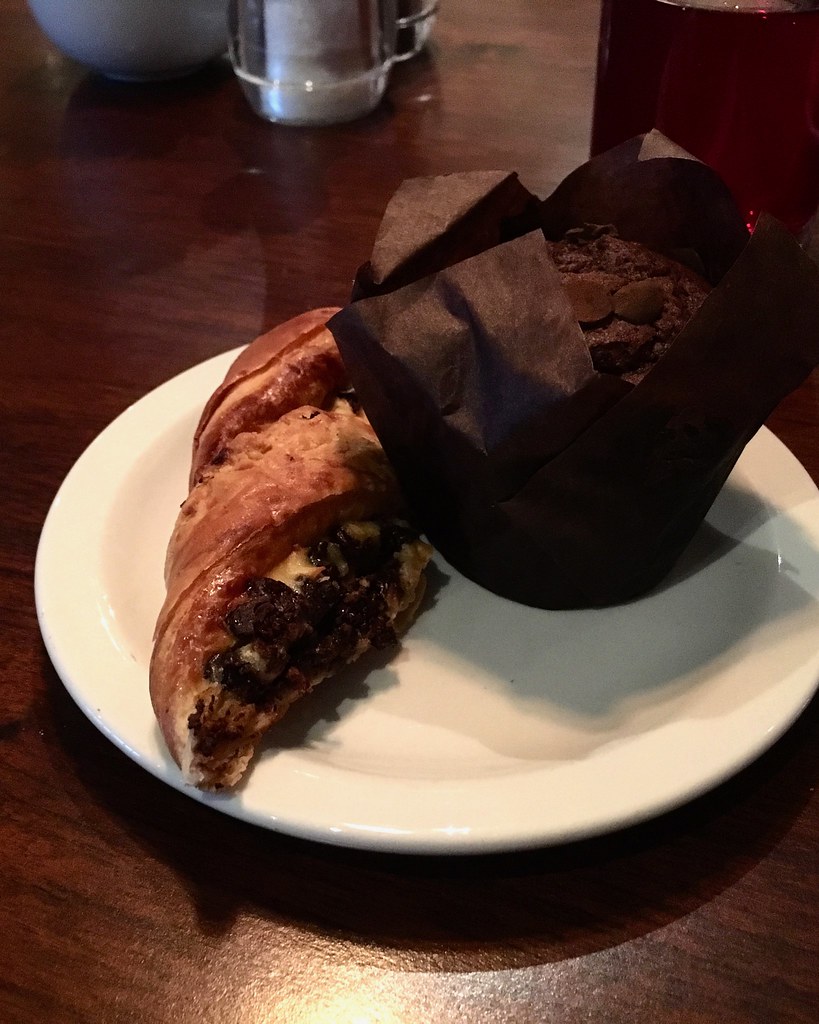 Well and truly stuffed I headed home a happy lady. I definitely recommend paying a visit to the Worsley Park Marriott Hotel next time you’re in Manchester or just fancy a staycation. They’re well known for their golf course and you can even get married there.

Thanks Worsley Park for breakfast! 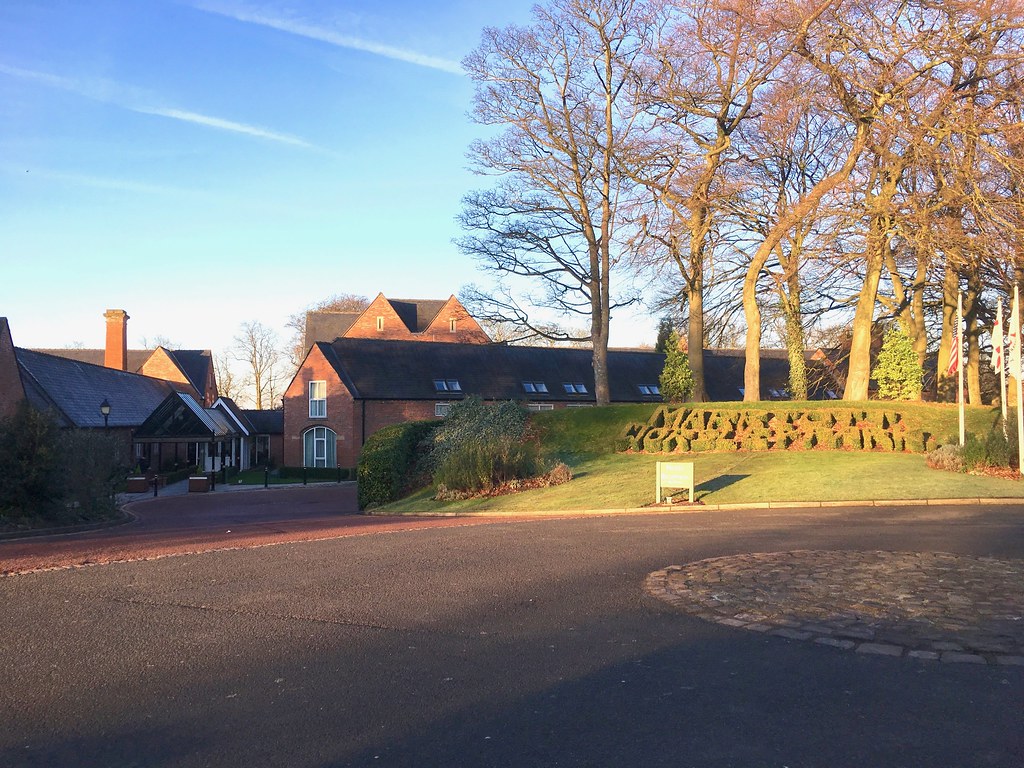 *Breakfast was complimentary but as always, all opinions are my own.

Off on an adventure

Overcoming The Obstacles Standing Between You & A Life Of Travel

My Week #36 – Workshops and Off Scale Victories

My Week #37 - A Calorific Adventure