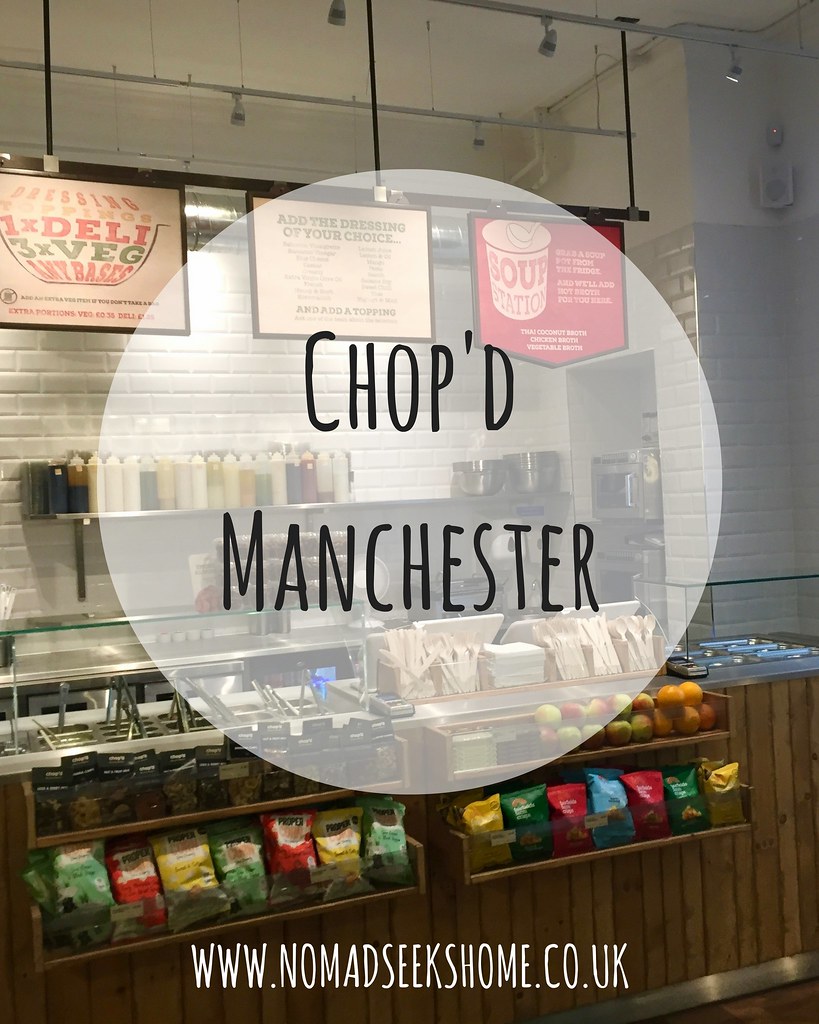 A couple of weeks ago I was invited to an event at Chop’d, a salad eatery that has just opened on Cross Street in Manchester. I’m always up for trying new food so I accepted.

For those who know me well, they will know for a fact that I’ve never been much of a salad fan. I’m not sure whether it was my childhood abhorrence to any food that was green or I just plain prefer sandwiches. These days I will eat anything green (apart from peas don’t ask me why) but I’ll never choose a salad while I’m out. Or make one at home for that matter. I just found them boring and unfilling.

I think it was about 4 years ago when I first entered the American salad chain Sweet Tomatoes and that was an epiphany; a salad epiphany if that’s a thing. Apparently I adore salad when I can make it myself. But of course it being based in America, I’ve only been able to return a handful of times. I’ve never found anything I could compare it to over here in the UK. You can make your own salad at Subway but it’s not the same. 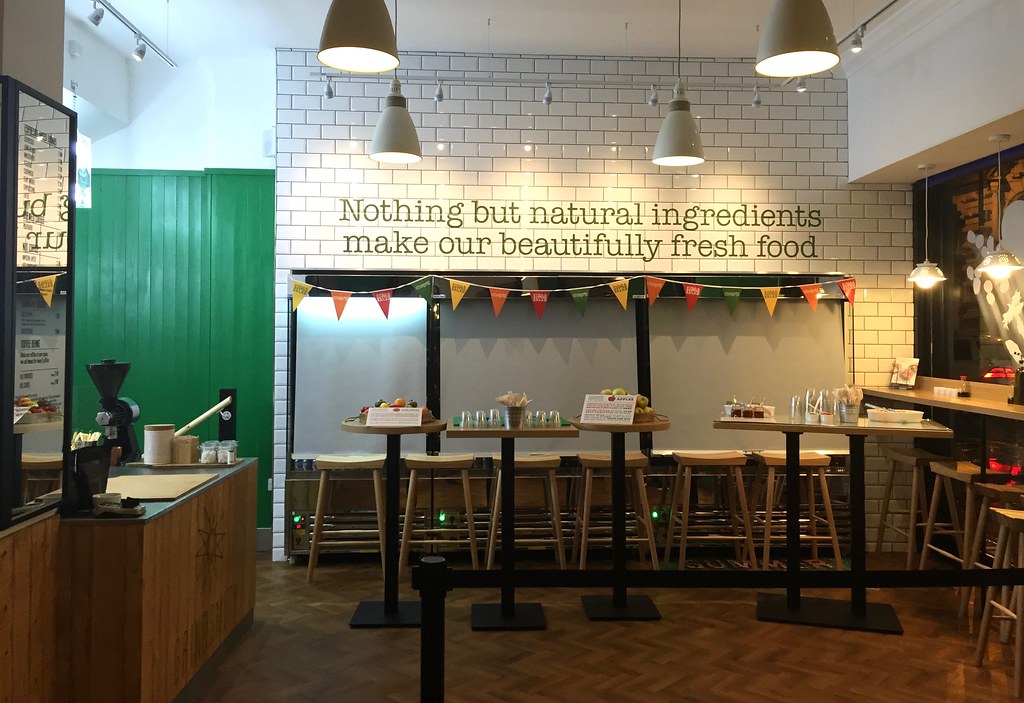 Enter Chop’d. Originally from London, it has 12 stores in our capital and now 1 in Manchester. It’s been around for 12 years and prides itself on how natural it’s ingredients are. The chicken is just chicken and the tomatoes are just tomatoes. Nothing added. I love that. Another factor that would stop me buying a premade salad is all the extra rubbish they stuff in there to preserve it. Everything at Chop’d was right there in front of you – what you see is what you get. 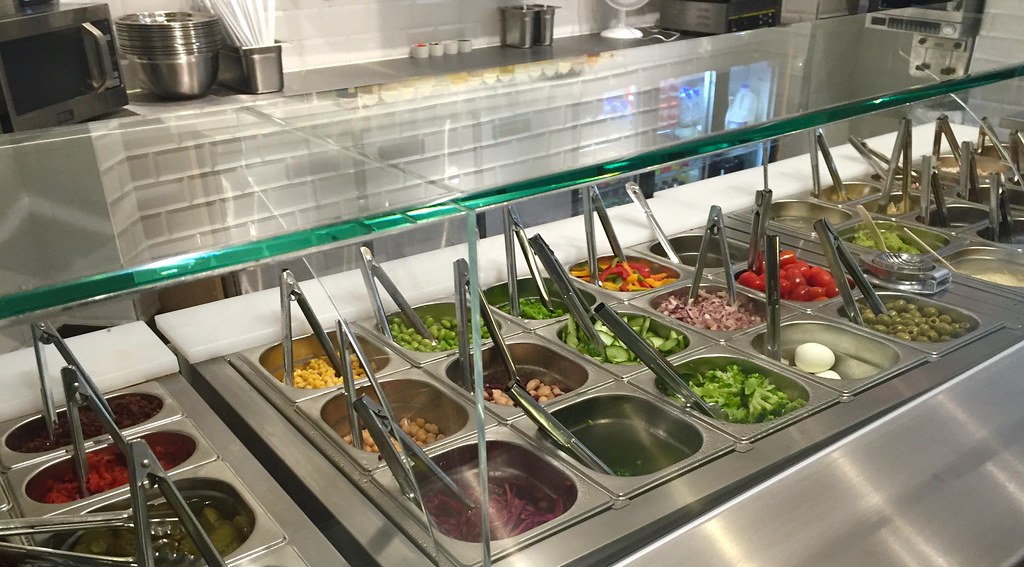 Now this was the evening where Manchester had that freak rain/thunder/lightning storm that flooded the city centre so I was a wee bit damp. Fringes do not do well in the rain people! Nor do ballet flats or thin Primark “raincoats”. I brought my friend Claire along with me who is anti salad so this was going to be interesting. 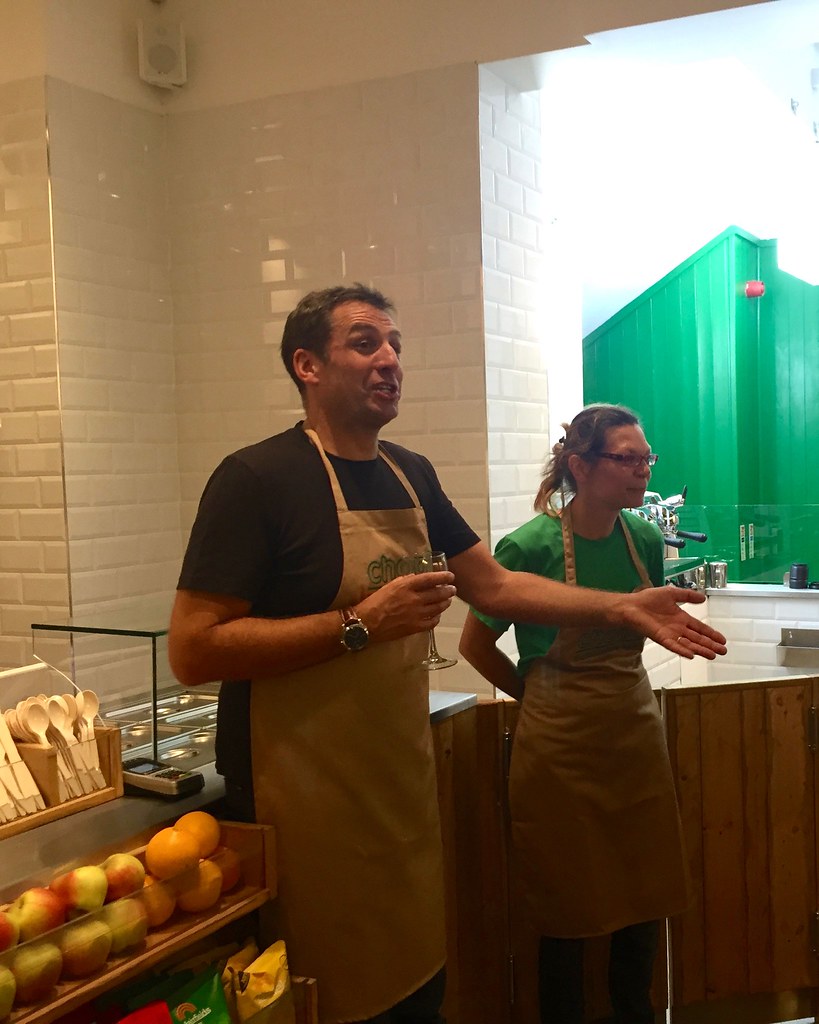 When we arrived we were greeted with a glass of wine and we got to borrow fun Chop’d aprons to wear. First, we learned a bit of Chop’d’s history, then we got to taste test their tomatoes from Sussex, apples from Kent and chicken from Essex. The chicken came with a jerk paste and fresh coriander, which was delicious and there was also fresh cooked smoked salmon, which was to die for. I will admit that I totally filled myself up on that! 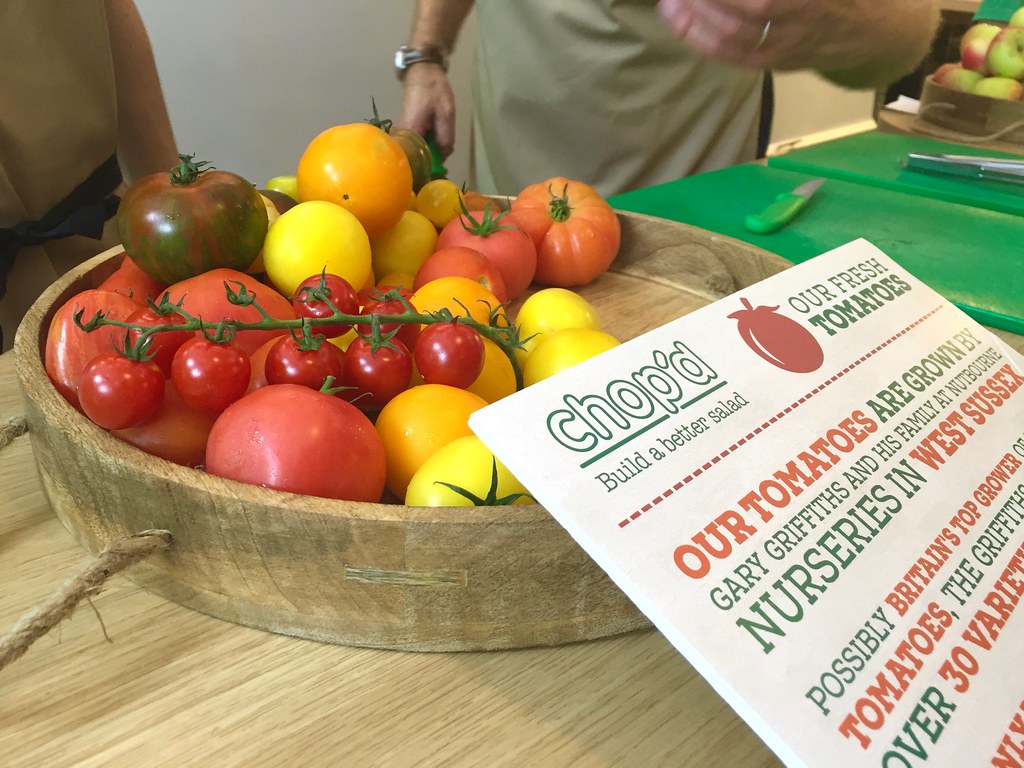 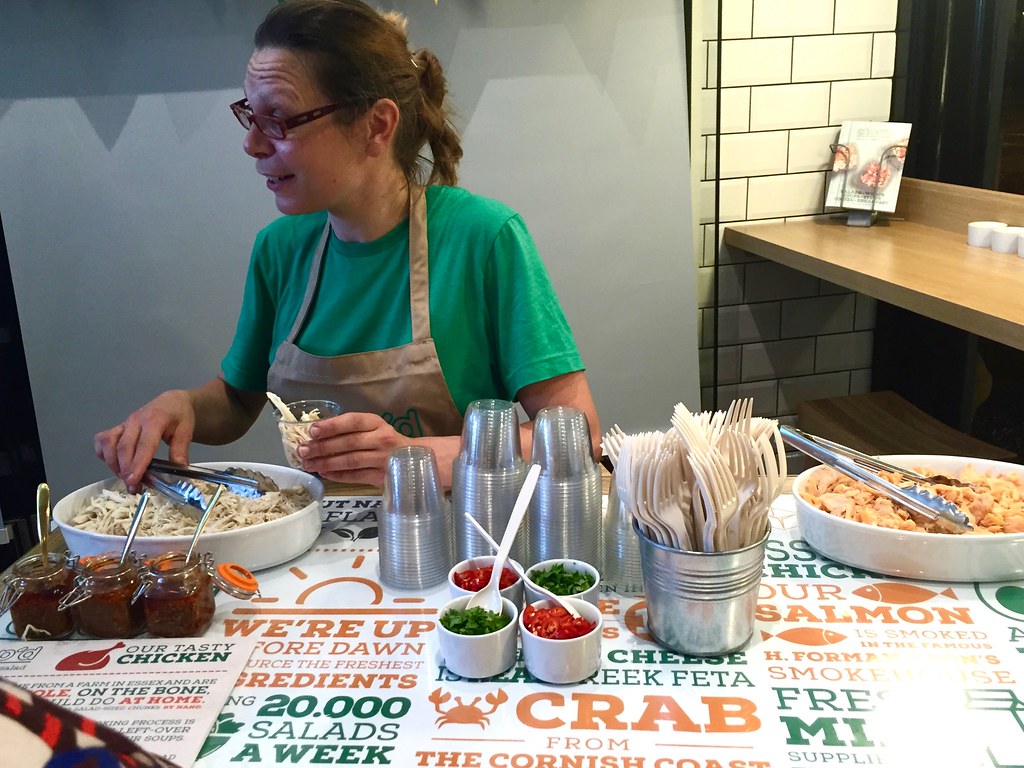 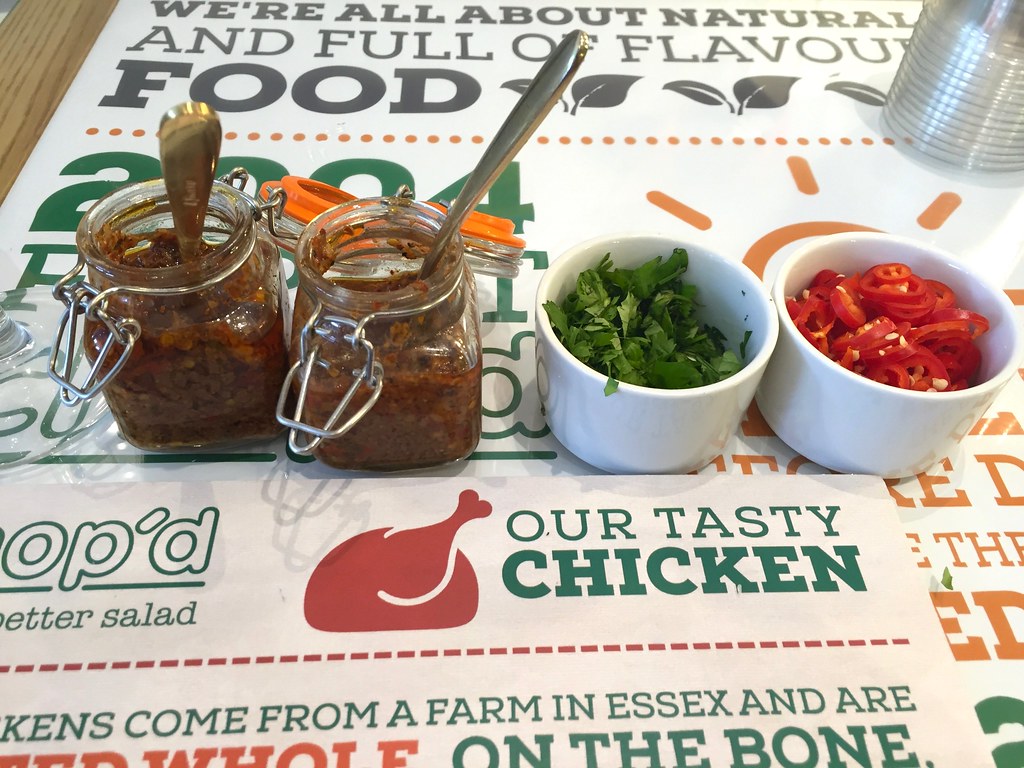 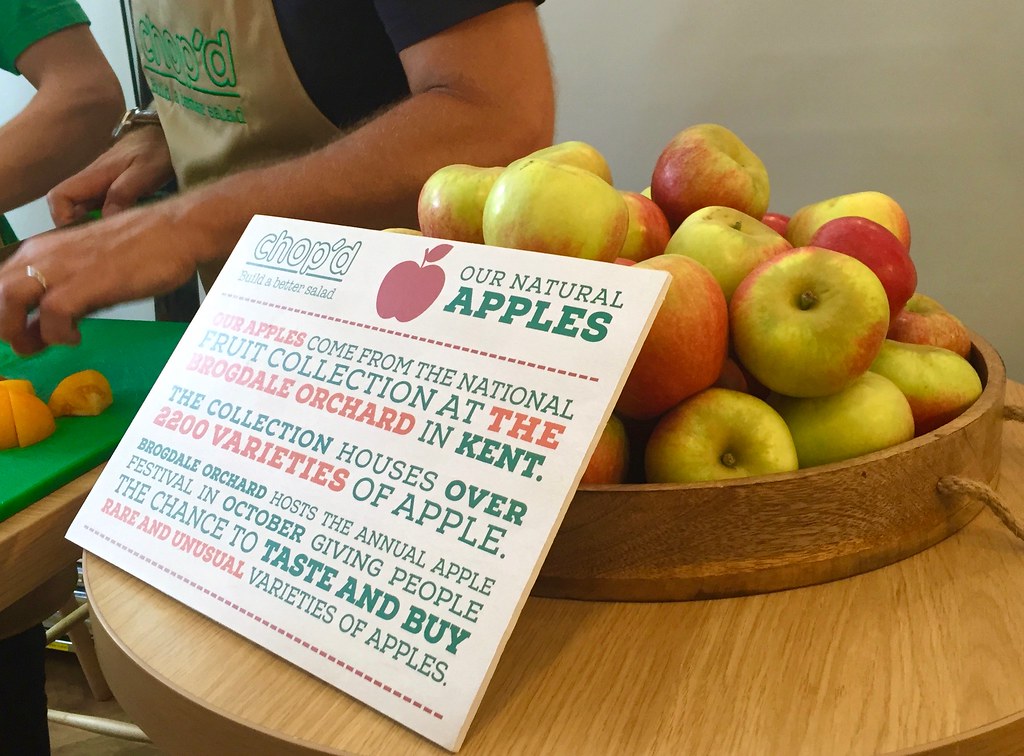 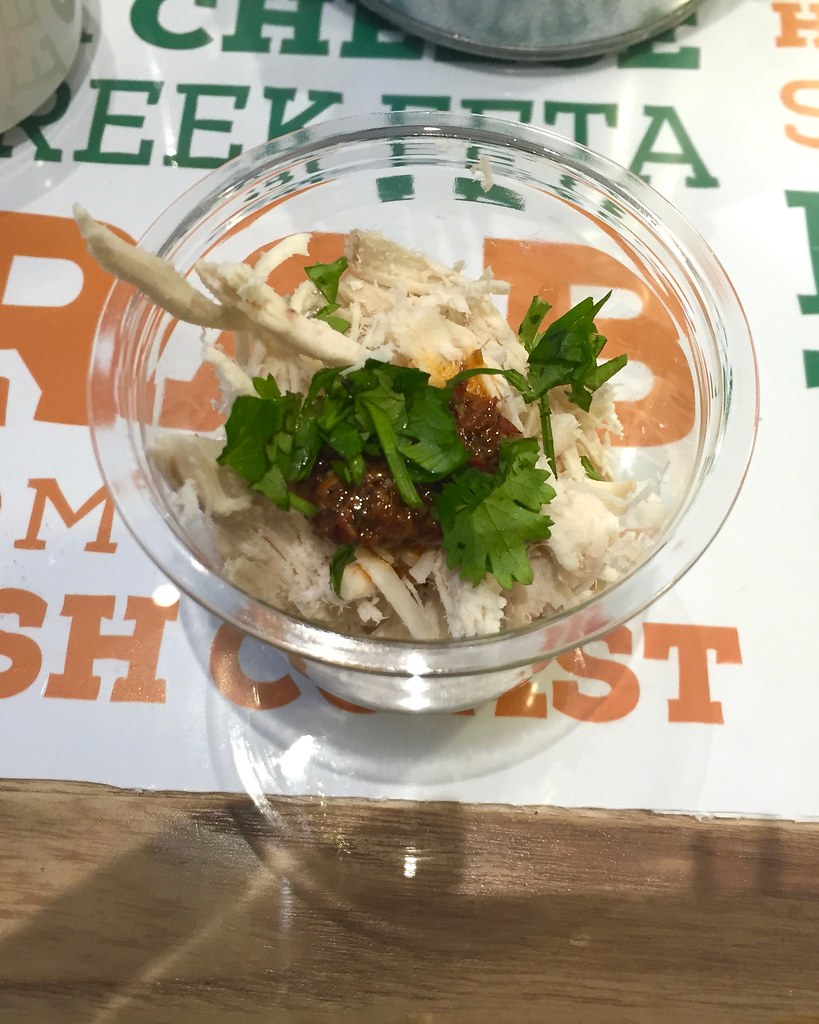 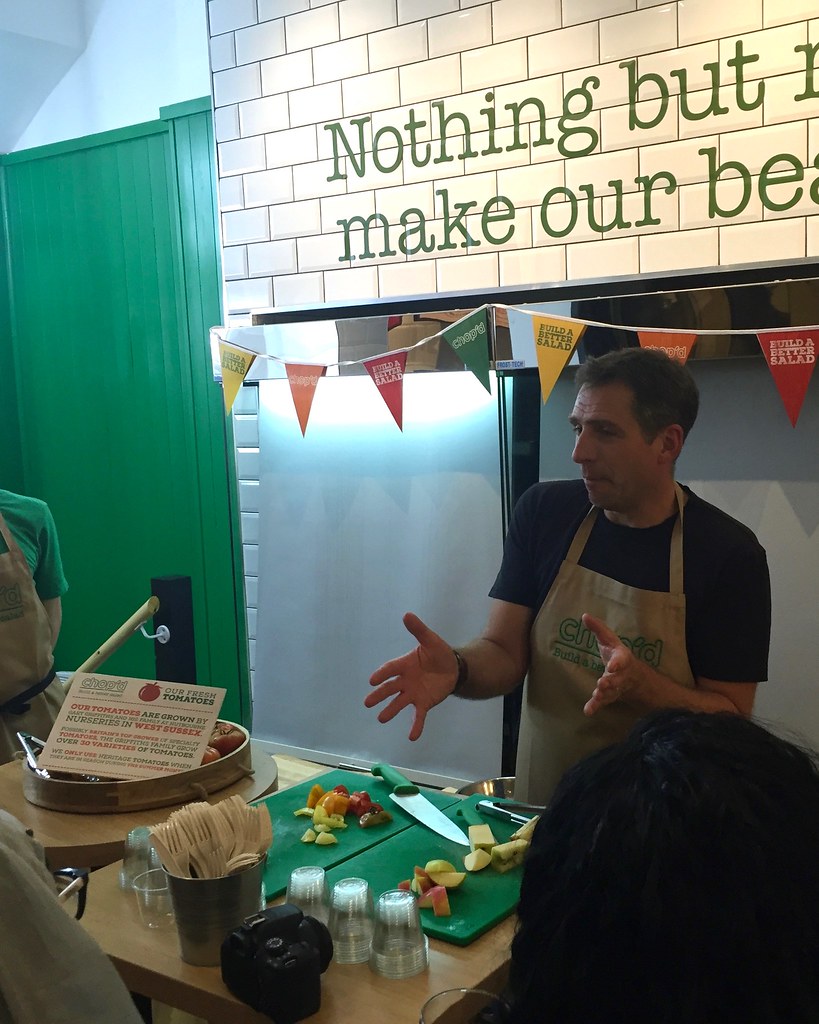 After that, it was the fun part. Chop’d challenged us to make our own salad. They let us all get behind the bar and make ourselves a masterpiece. It was difficult picking between all the yummy ingredients but I decided to go with both my heritage and be weird and break the rules. I called it the triple chickpea. That’s right, my salad included chickpeas, hummus and falafel. I also added baby salad leaves, couscous, olives, roasted red peppers and tomatoes with a lemon & olive oil dressing. Call me crazy but it was perfect for me. 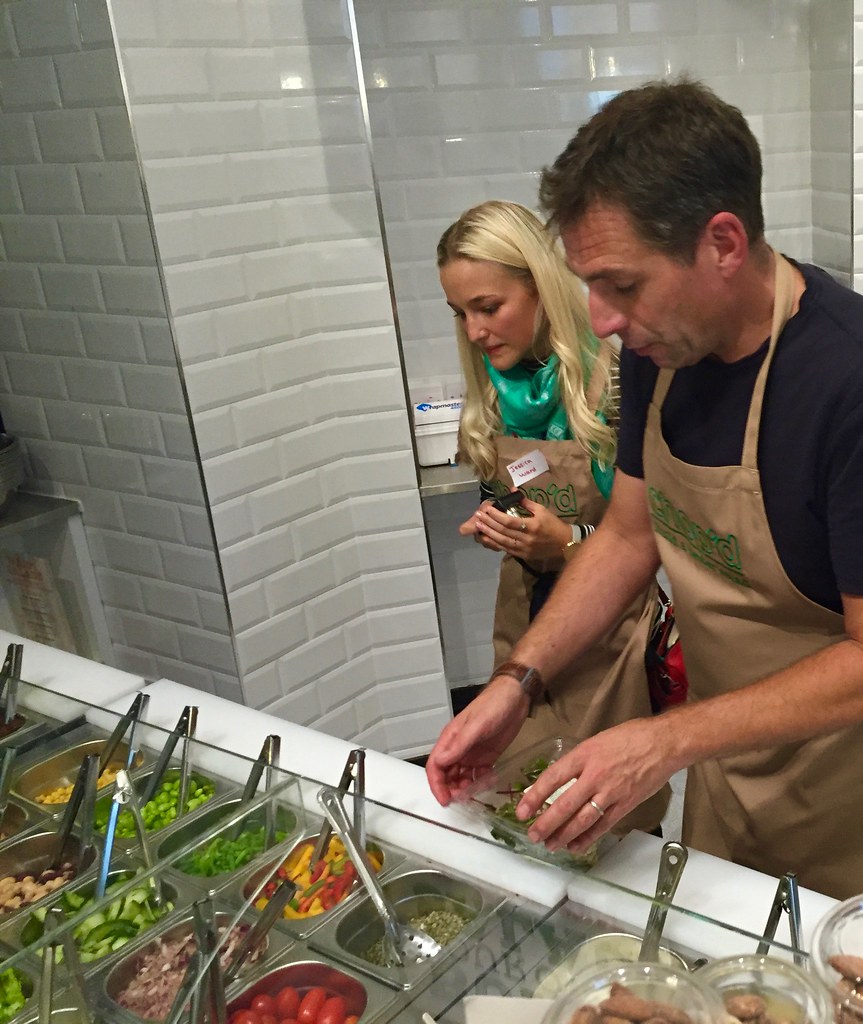 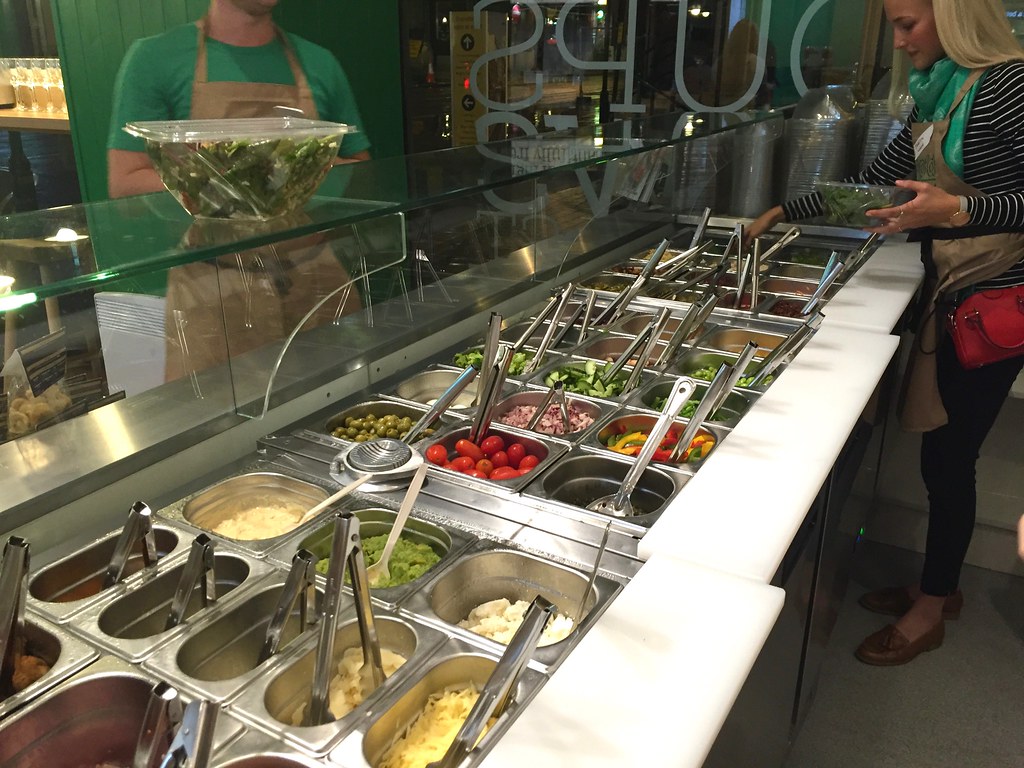 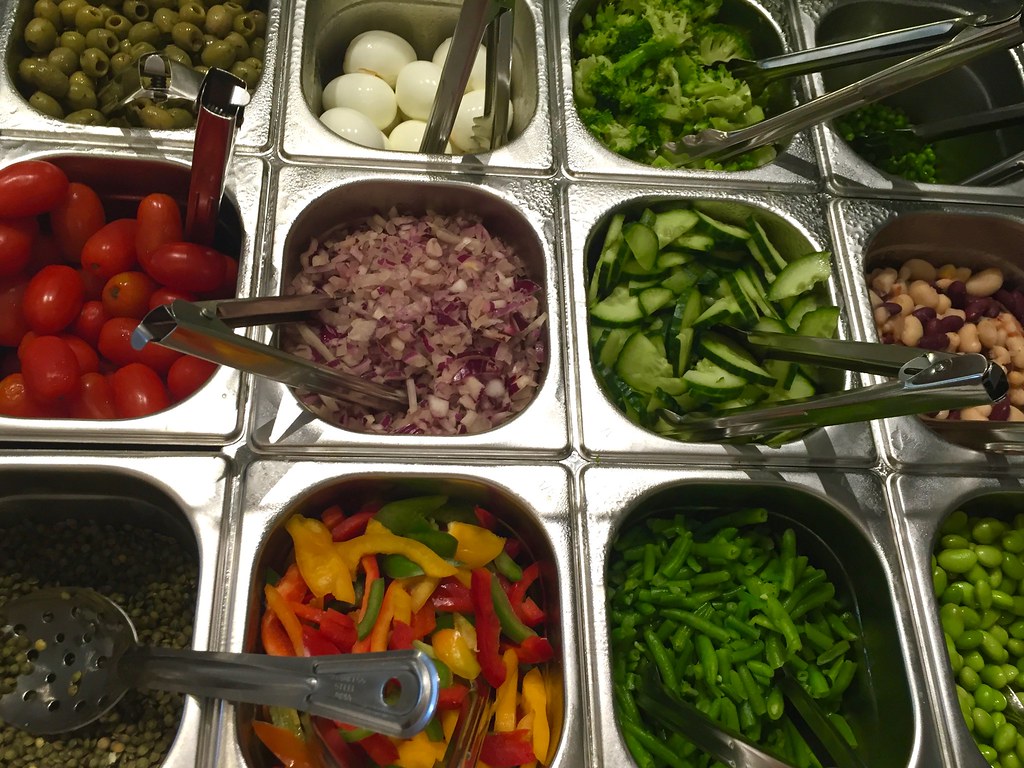 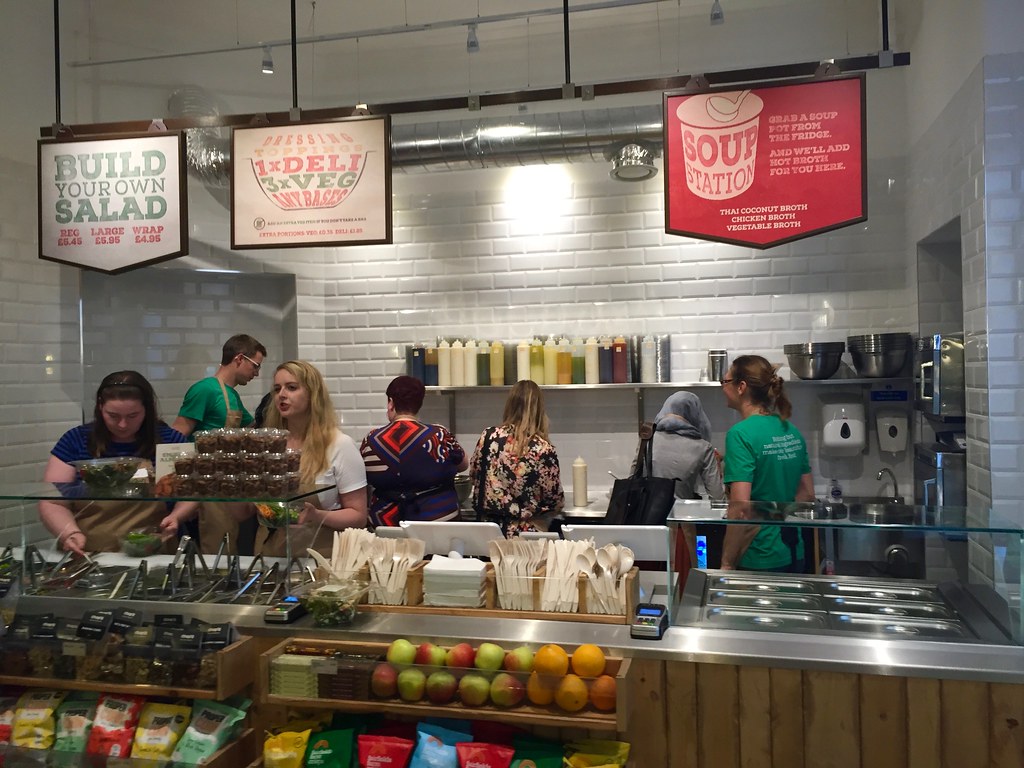 Since I had filled myself up on all the samples earlier, I took my salad home with me to enjoy. And boy did I enjoy it. Topher was not allowed any of it. Claire even said she really enjoyed her salad. I’ll definitely be back to Chop’d next time I’m around that area. I need to try the other things on their menu – they also do pre-made salads, soups, wraps, stews and even breakfast. It makes me slightly wish I had a city job so I could go there every day! 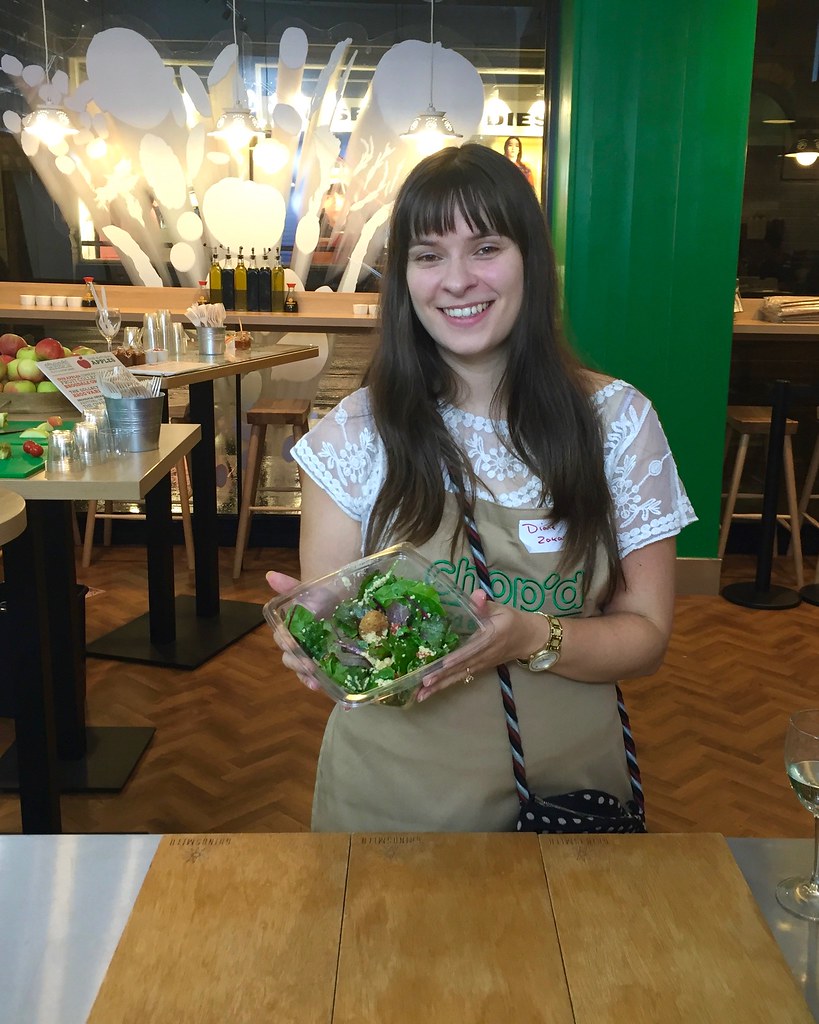 Thanks Chop’d for a great evening and opening my eyes (and Claire’s eyes too) to the world of salad! 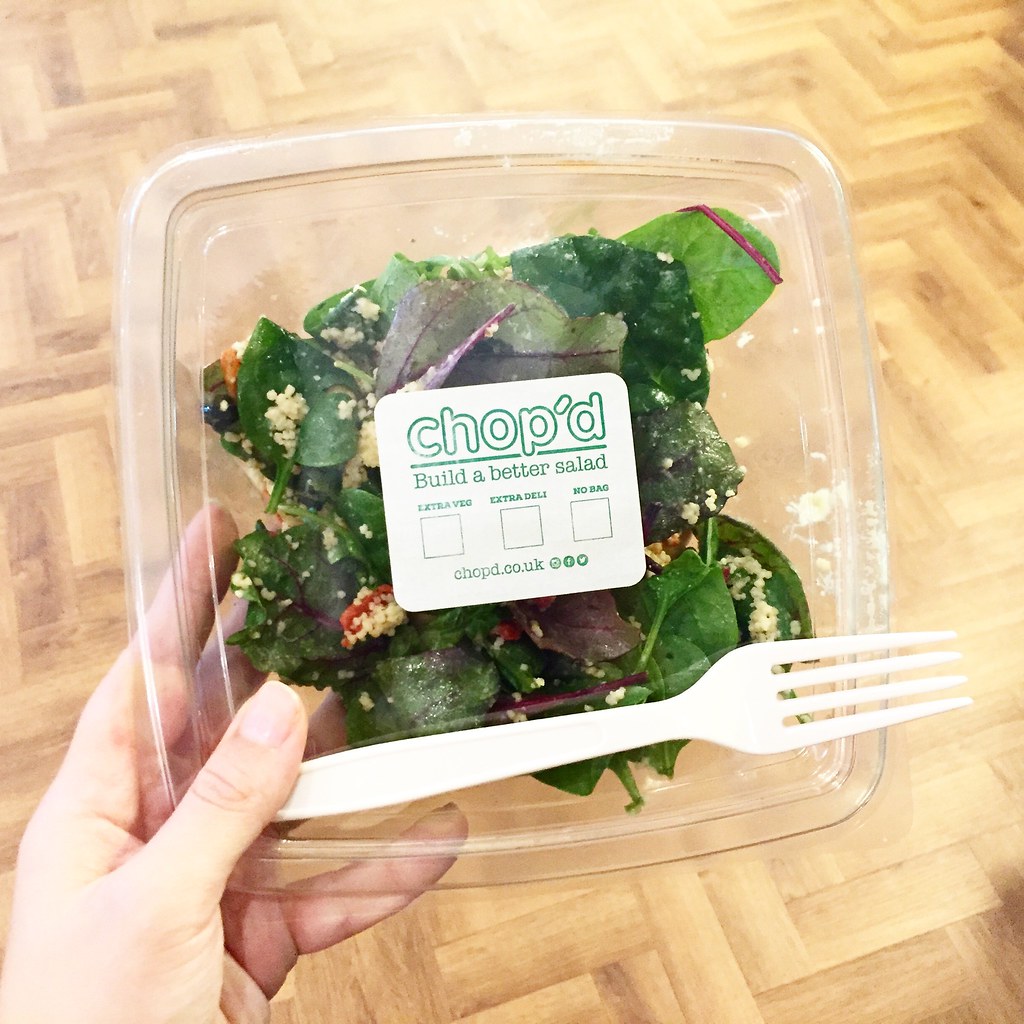 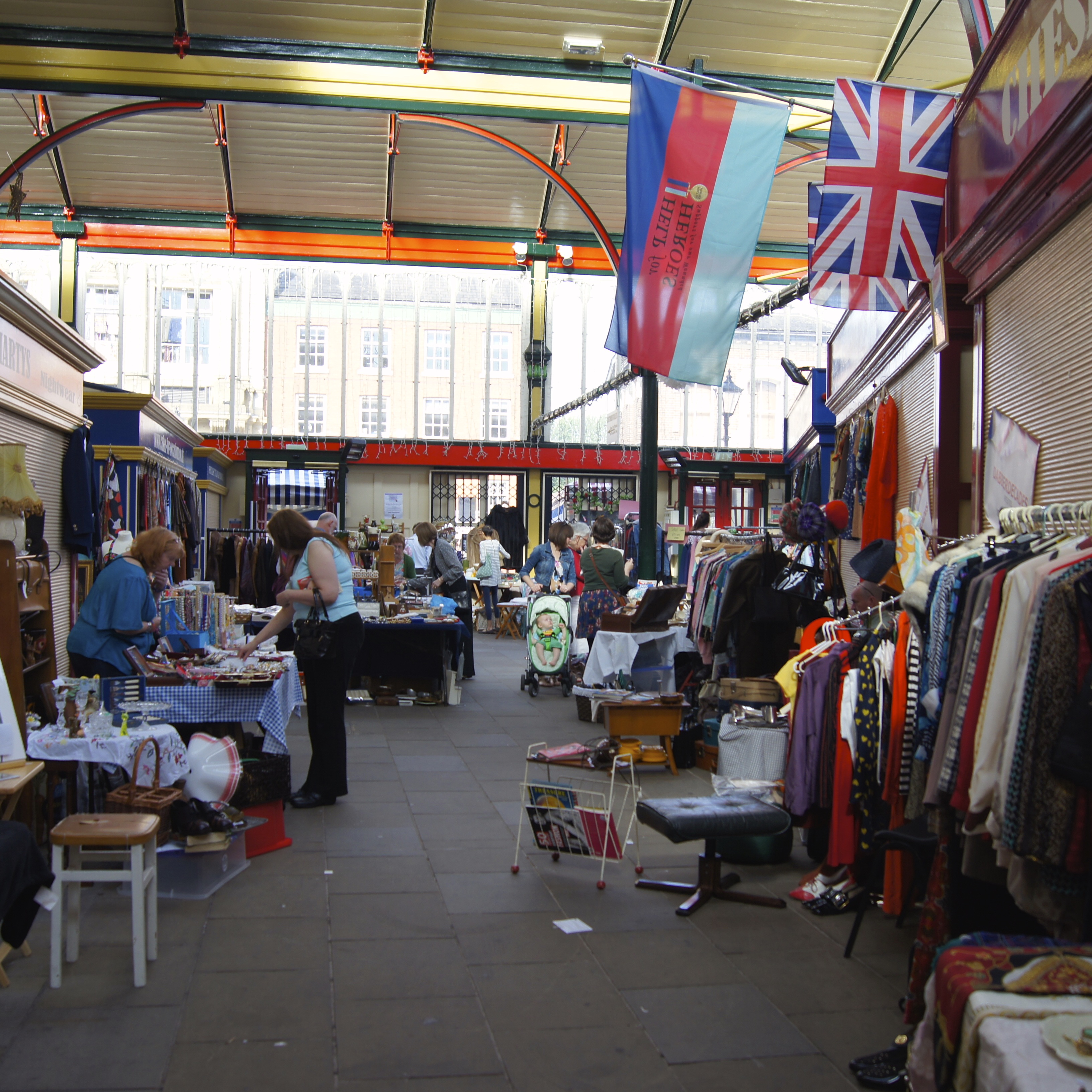 Vintage Village: Having fun at the September birthday bash!

My Week #21: Salad and Cake and Curry