This.Is.Halloween. Happy Halloween folks! It feels a bit weird having Halloween on a Monday night but we had a Halloween party on Saturday night so it’s all good. It’s not only the first party that we’ve thrown at our new home but it’s the first party I’ve hosted in years. So there was a lot to do. 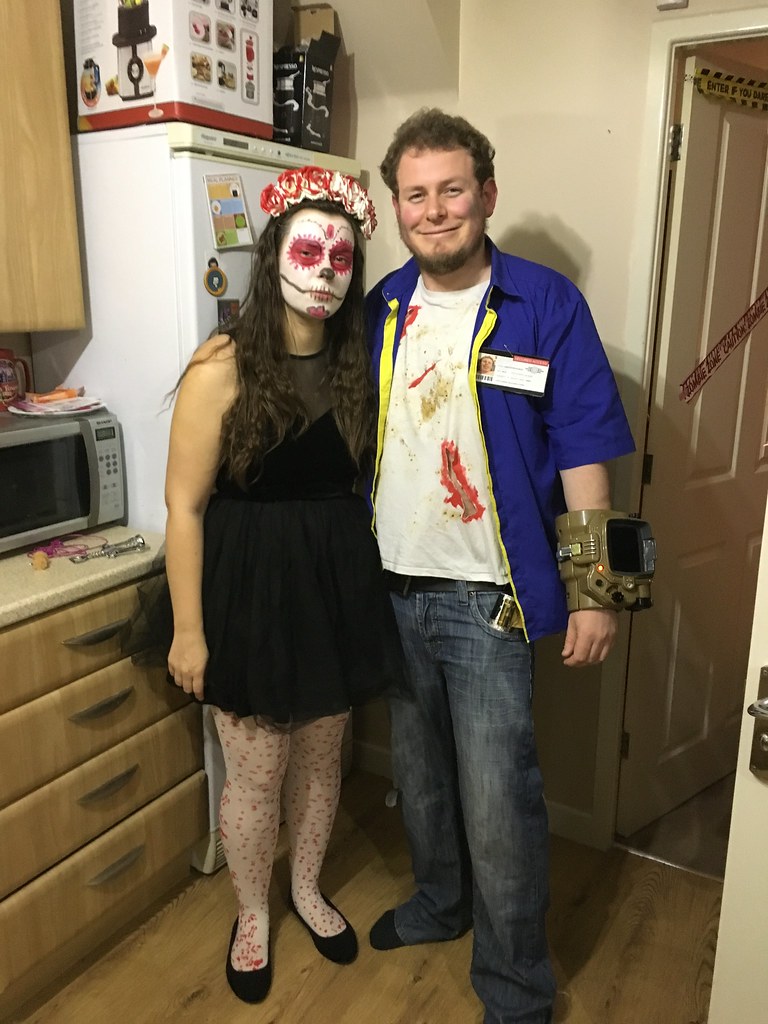 First off, the costumes! I decided early on that I wanted to dress as a Day of the Dead lady. It was cheap (already had the dress) and I’ve never attempted face paint before so it was a bit of a gamble. I had a very wobbly moment when I first started putting the white paint on that I’d bought as part of a crappy kit from the pound shop and it only made me look pasty. Panic! However once I picked up a trowel and started shovelling it on my face, it looked a lot better! The crayons that came with the kit were absolutely useless so I ended up using mainly liquid eyeliner for the black detailing. Luckily it all worked out ok. Phew.

I completed the look with a Crown and Glory headband, the dress I used for my Darth Vader costume and some blood spatter tights from the pound shop (that were totally too small btw). 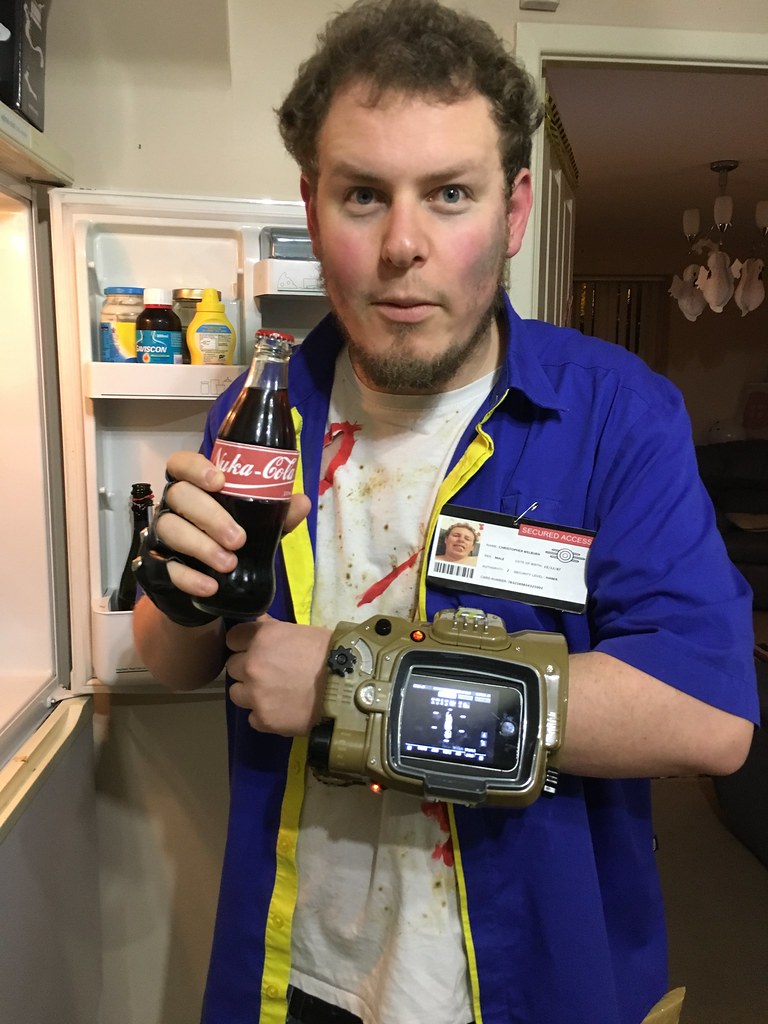 Topher went as a character from Fallout which involved us making a lot of props. My photoshop skills were put to good use that’s for sure. Particularly on the ID badge. In the background you can just see the awesome ghost decorations I got from Tesco. Loved those things.

As for the food. I can successfully feed an army. To save time and faff I bought baked goods then decorated them myself. The brain cupcakes were the most intricate but really not bad at all to ice once you got the hang of it. 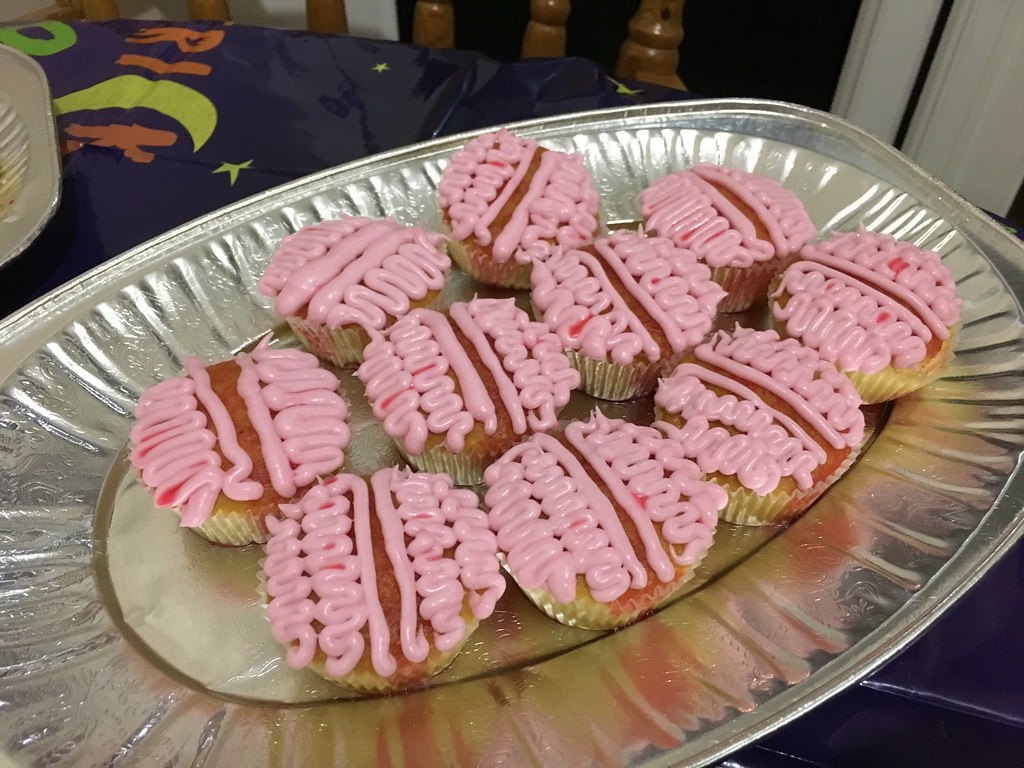 The blood spatter shortbread cookies were the most popular. Claire did them as I was running low on time and they came out great. They would have worked better on flat cookies but these were the closest thing I could find and they did the job. 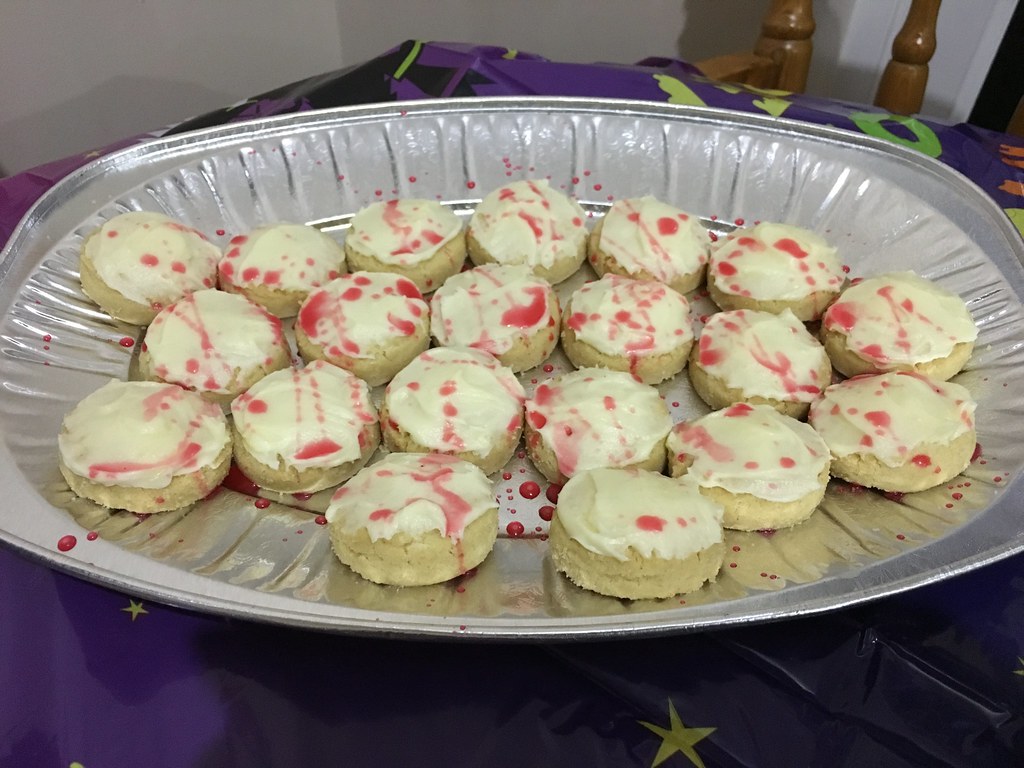 This was a chocolate tray bake from Tesco that had a load of chocolate curls and other bits on it which I scrapped off and then iced. It came out pretty well but we were left with a lot left over. I reckon it was because people are always reluctant to take the first slice of something. Oh well, more for Topher and I! 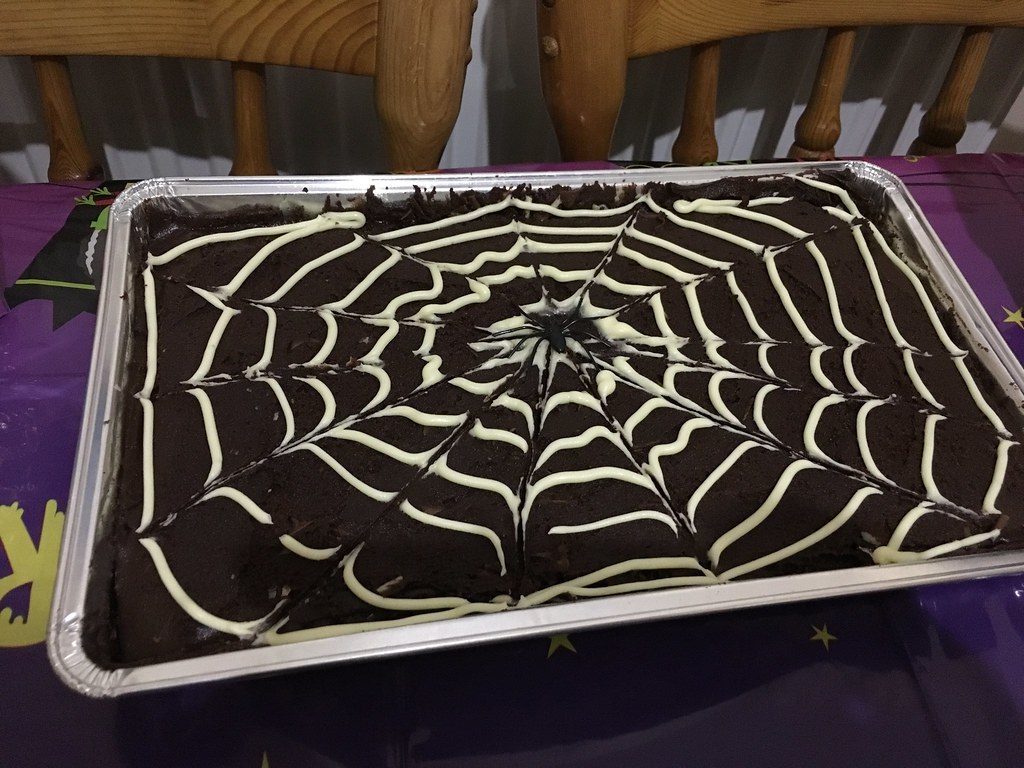 As well as the usual party snacks like crisps, popcorn etc, I served some candy corn that my parents brought back from America for me. I learned that I definitely can’t eat as much at once as I used to. Sugar coma. 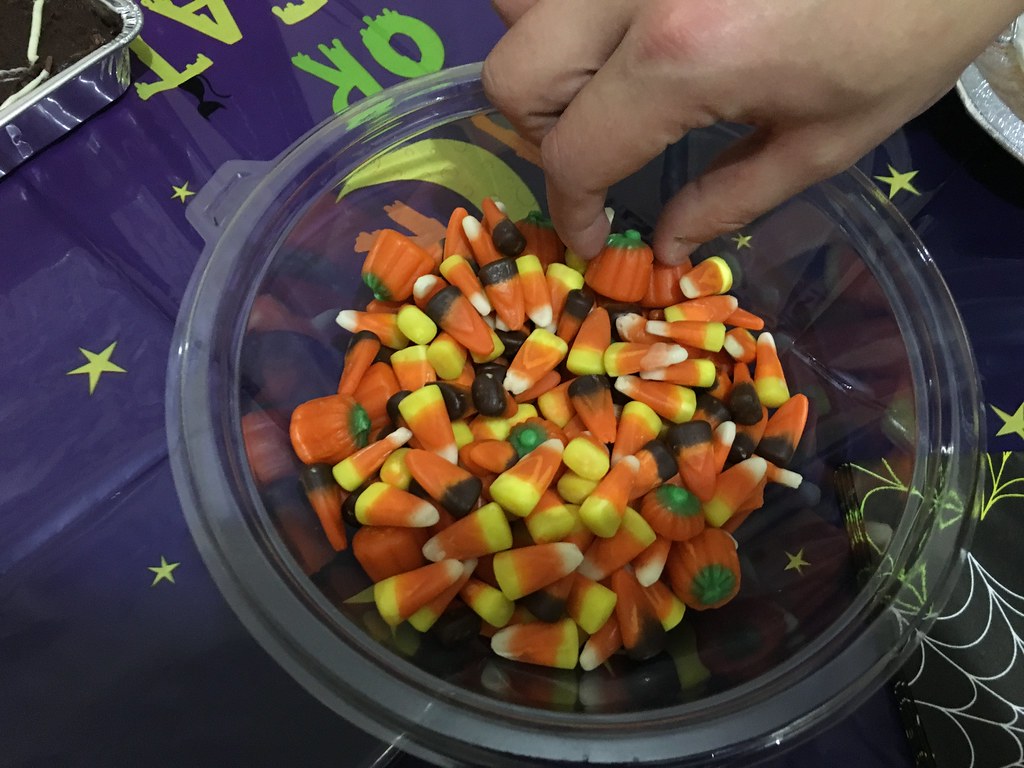 Overall, we had a great night and I was so pleased that everyone made an effort with their costumes. I can’t believe I didn’t get any pictures of them! Too busy nattering I guess. 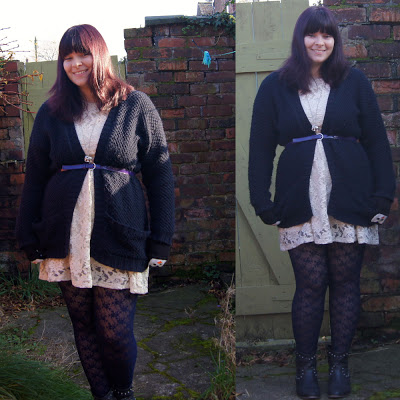 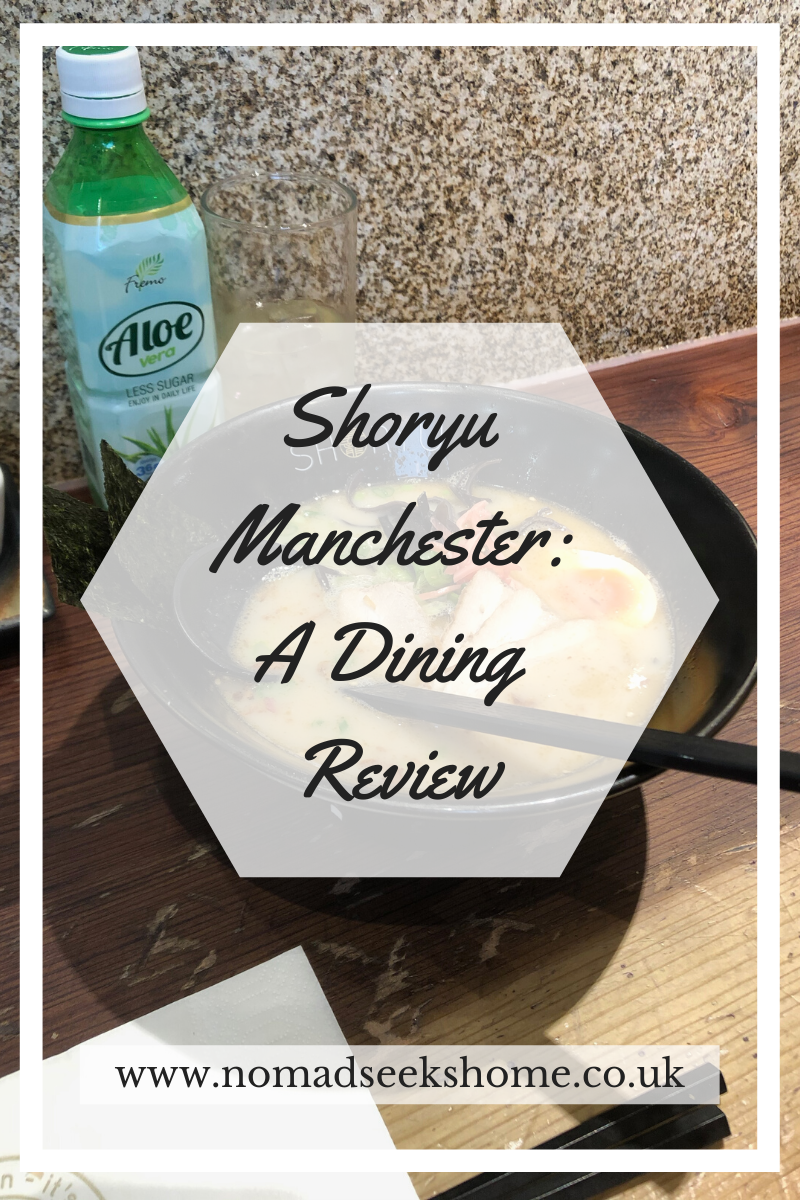