Our Wedding DIY’s and Details

There were so many little wedding DIY’s and details that went into our day.

So today I’m going to give you a little inside look into what we did and where everything was from. Photos are a mix of our friends and also our photographer Nikki Cooper (you can tell which ones are her – they’re super good!).

So lets dive in! I already talked about my outfit during the main wedding post so now it’s Topher’s turn. His suit was from Moss Bros, as was the rest of the groomsmen’s suits. His little pin is the Rock n Roll Husband pin from Veronica Dearly (a collaboration with Rock n Roll Bride) and I have the matching Rock n Roll Wife one which I attached to my bouquet. The buttonhole I made myself. 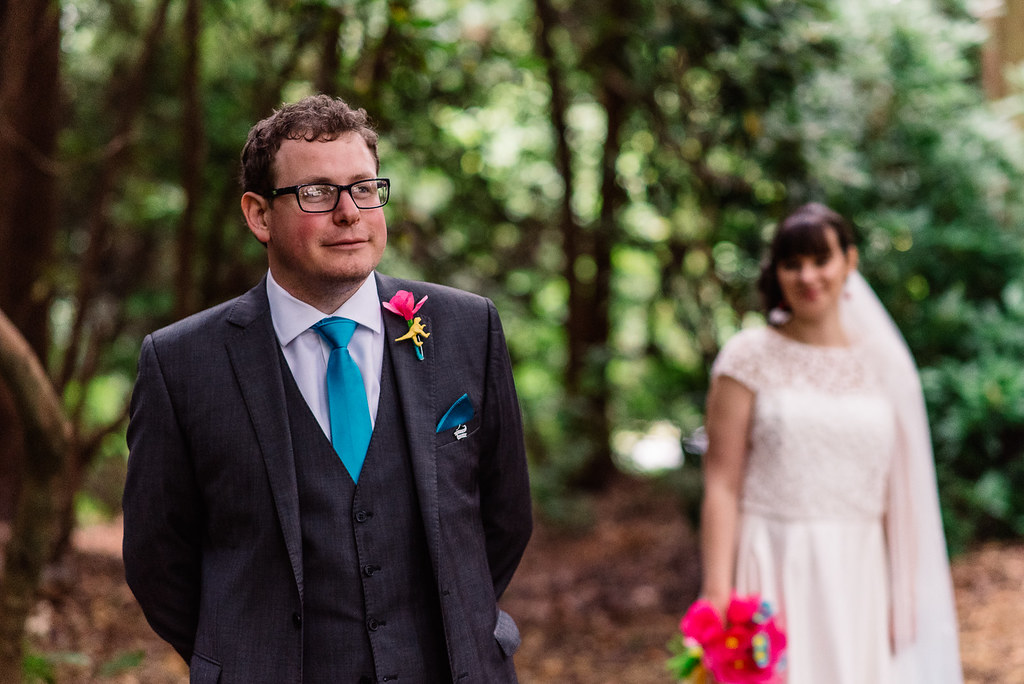 The buttonholes were the last DIY I did before the wedding and I had no clue what I was doing. I knew how I wanted them to look but I had no clue how to achieve it and mainly how they would be attached to the men’s jackets. I made the flowers and the dinosaurs I spray painted but then what to use for the main stem? Luckily this is where my dad stepped in and suggested using a safety pin.

I attached the flower stem to the bulky part of the pin by wrapping blue twine around it and securing with the glue gun. The dinosaurs were placed on top and also secured with the glue gun. And they held all day – score! The flowers were a little worse for wear by the end of the day but nothings perfect. They looked good for the photos and that’s all that matters. 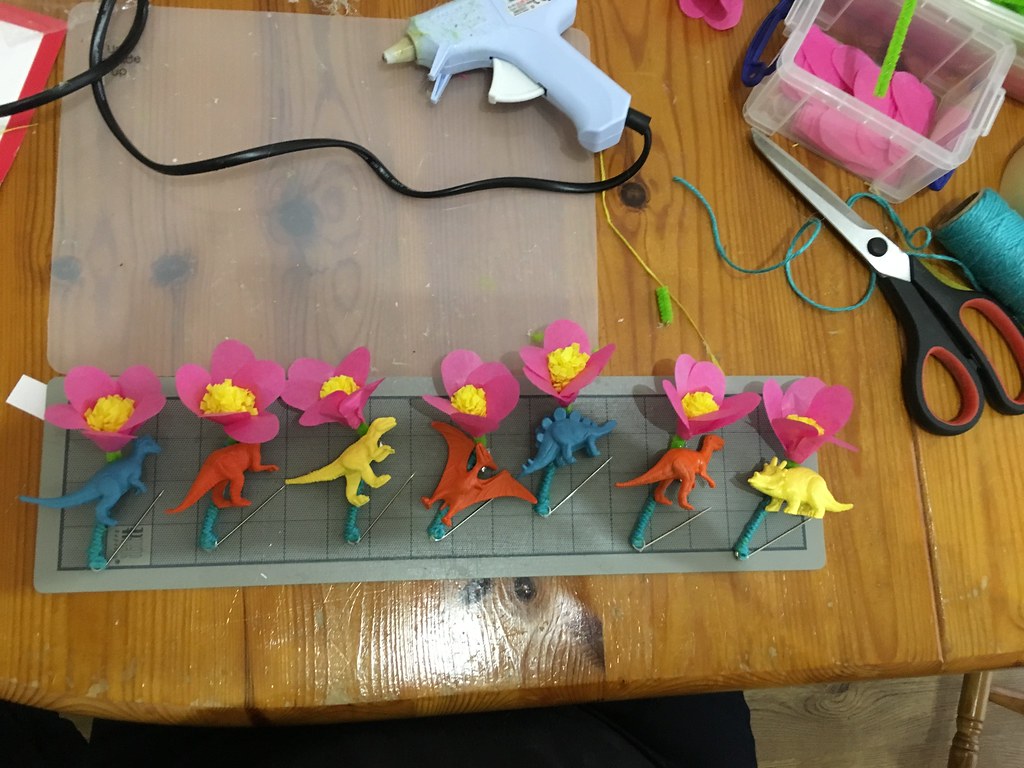 Topher really wanted some nerdy cufflinks so I scoured Etsy to find the perfect ones. He had a clear idea of what he wanted so I ended up finding an awesome cufflink shop called Showstopper Supplies who did a custom order for us. He wanted the eye of Sauron on one and the Deathly Hallows on the other one. To represent the two of us and our nerdy loves. 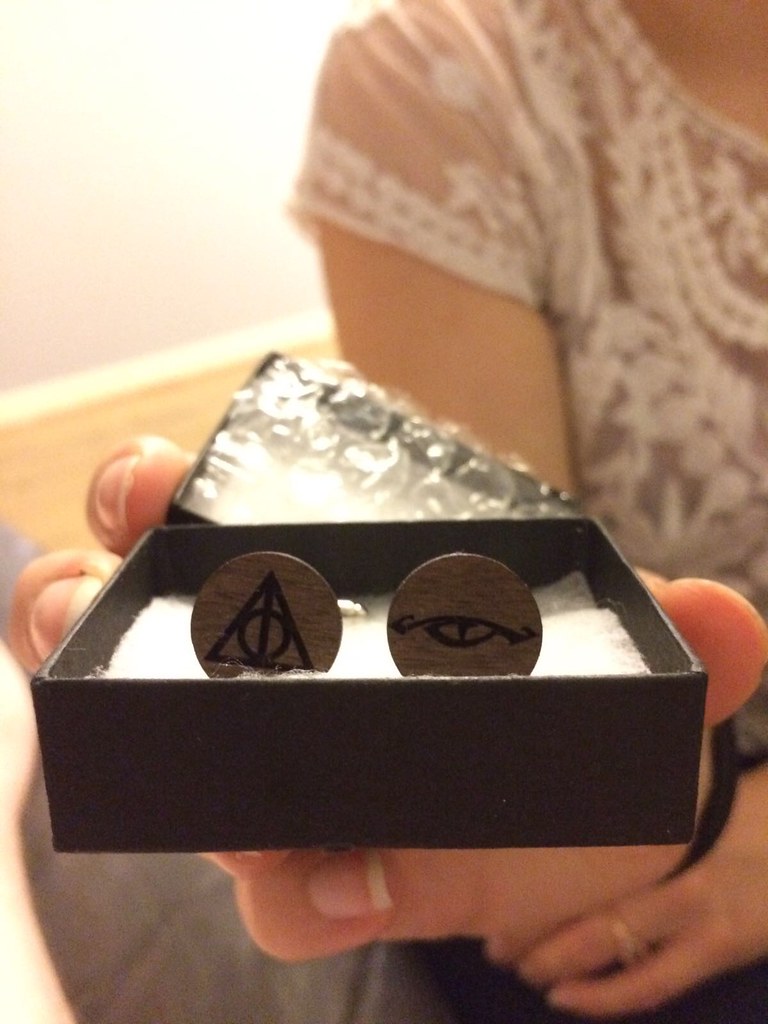 So onto the bridesmaids & bouquets. I actually forgot to say my earrings are also from Etsy and you can’t see them but these are the girl’s hair clips which are also from Etsy. The dresses were a pain to find but we got them from eBay (all the way from China!) and then altered locally.

The bouquets were made by me. The main pink flowers in my bouquet were made using this tutorial and the blue ones and the bridesmaid bouquets used the middle section with just one layer of petals glued straight on. To make stems I just used pipe cleaners in green which worked pretty well. The pink flowers are tissue paper (Paperchase), the yellow middles are crepe paper (Hobbycraft) and the blue petals are actually napkins!

The main pink flowers are also what I made for the centrepieces and decor for the ceremony table and seating plan. To finish off the bouquets I just added ribbon that I found on Amazon. 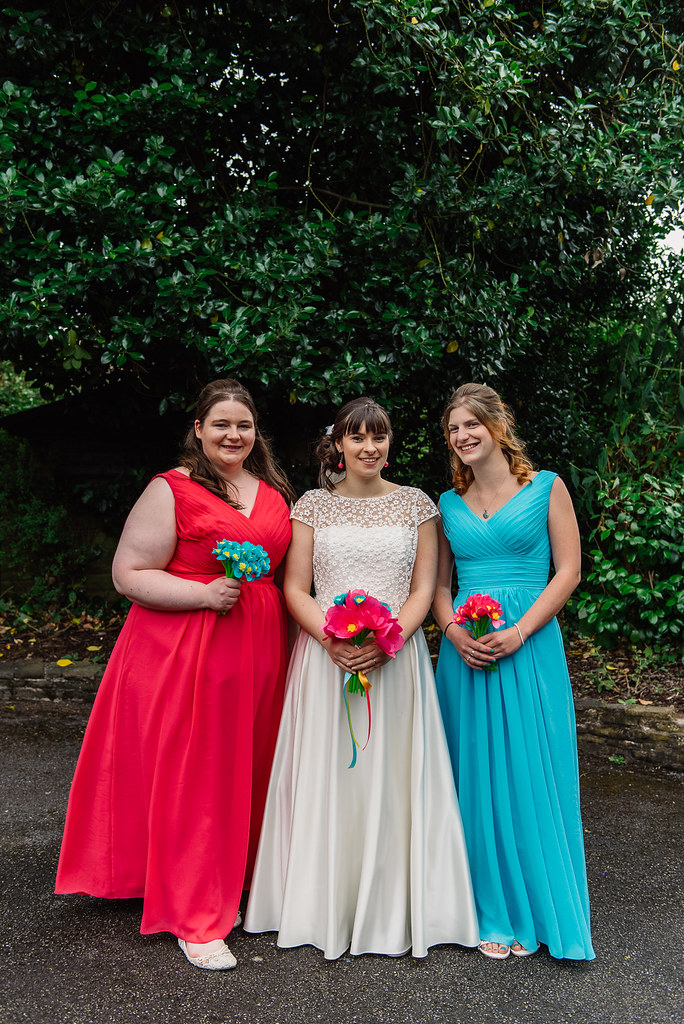 To thank my bridesmaids and also give us something to use as handbags on the day, I purchased these little clutches from Oh Squirrel. They were so cute and I filled them with things I got from the pound shop for us to enjoy on the night before the wedding. 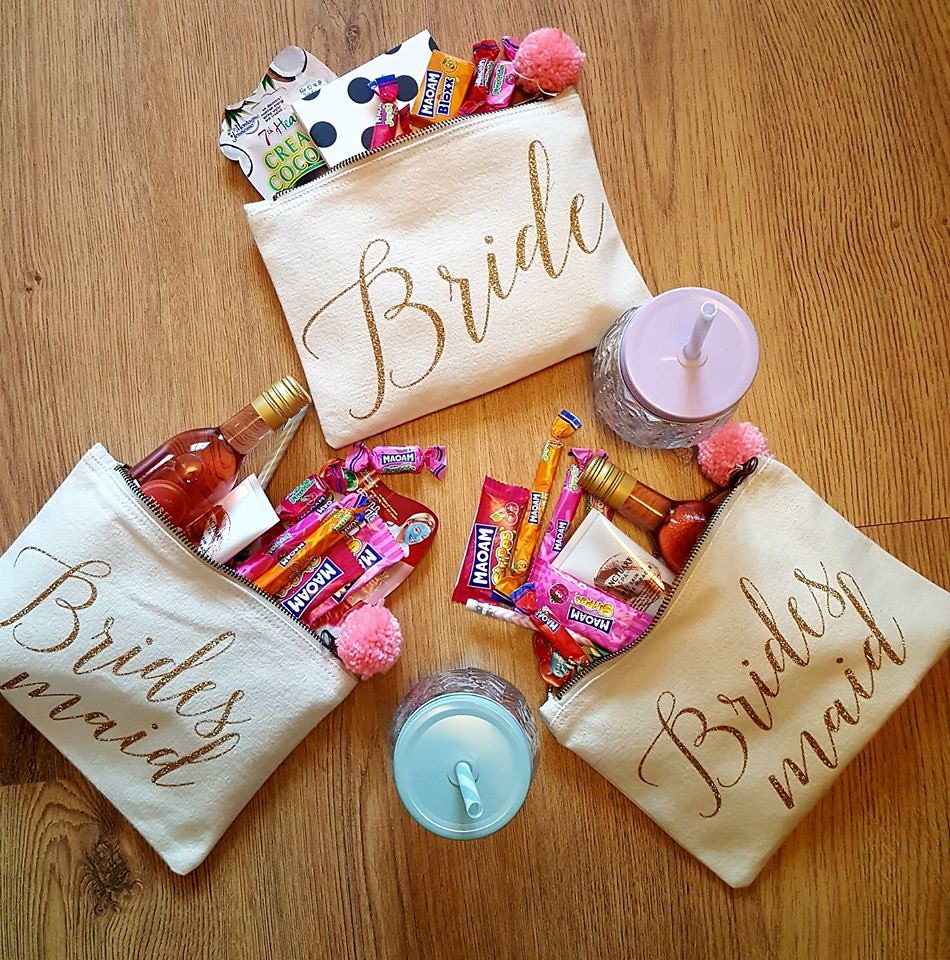 So, back to the flowers! These were all of the centre pieces. The flowers sat in light cream terracotta plant pots from IKEA. They were just under £3 each so not bad going! I’m really happy how they turned out. Thanks to my mum for cutting out all the petals for me! I kept getting them in the post from her which was pretty funny. And thanks to Claire’s mum and step-dad for helping me get all these (and everything else) to the venue – something tells me my little car wouldn’t have been able to handle them! 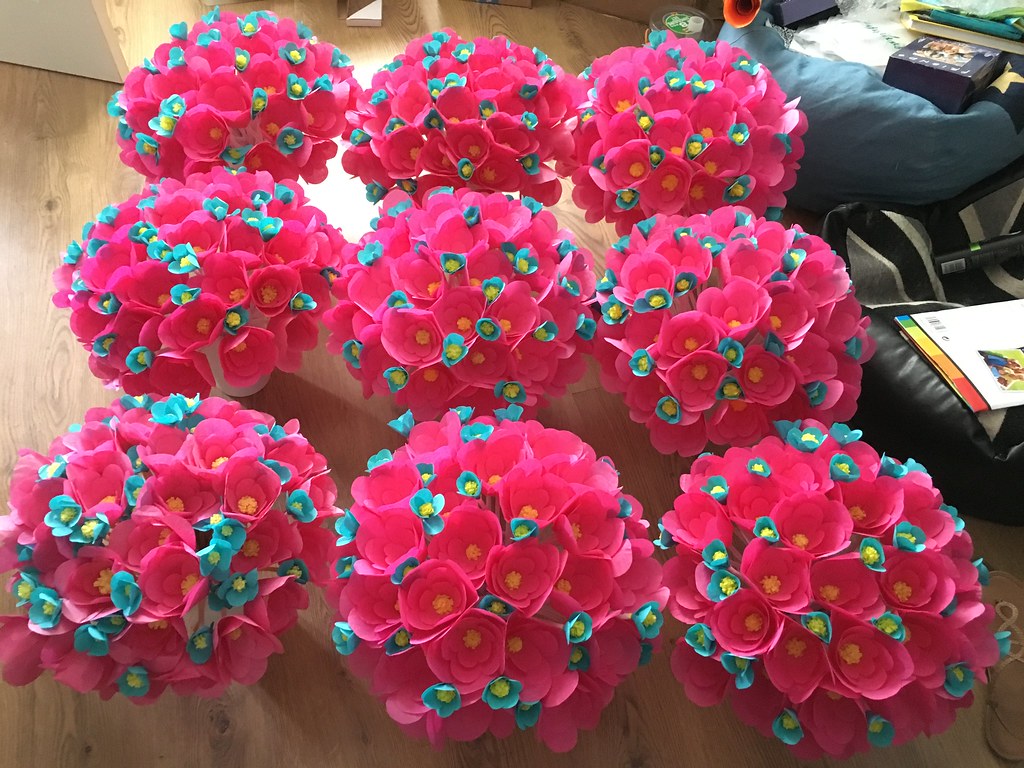 As I mentioned before, the ceremony table also used the centrepiece flowers but I had to be a bit more inventive with how to display them. Luckily I spotted this garland in Hobbycraft. Since the flower stems were pipecleaners, it was all too easy to wrap them around the garland. 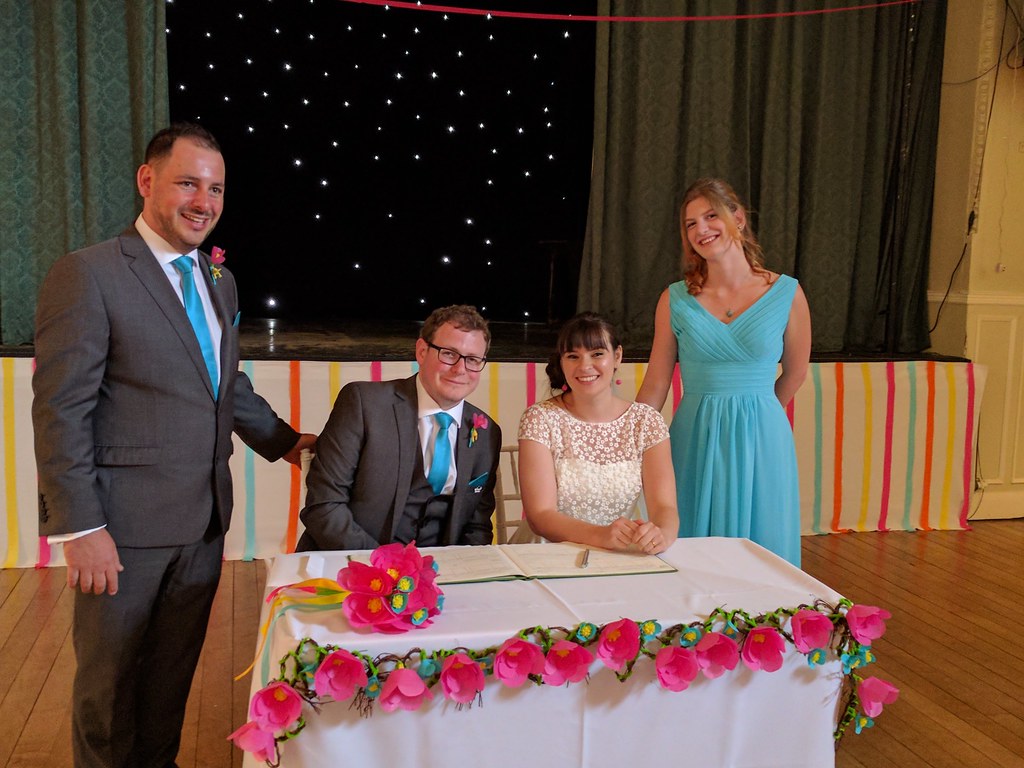 The main decor in the rest of the room was definitely the streamers. Another buy on Amazon, I think they looked great. The venue even took the left overs and put them around the venue (like the stage and the balcony). They actually ended up dropping kind of low so the venue cut them down the middle after the meal and they rested against the white curtains at the side of the room and looked just as amazing. Good call Bowdon Rooms!

The same ribbon I used in the bouquets were also used on the chairs as you can see. Thanks to Claire and my mum for making them! 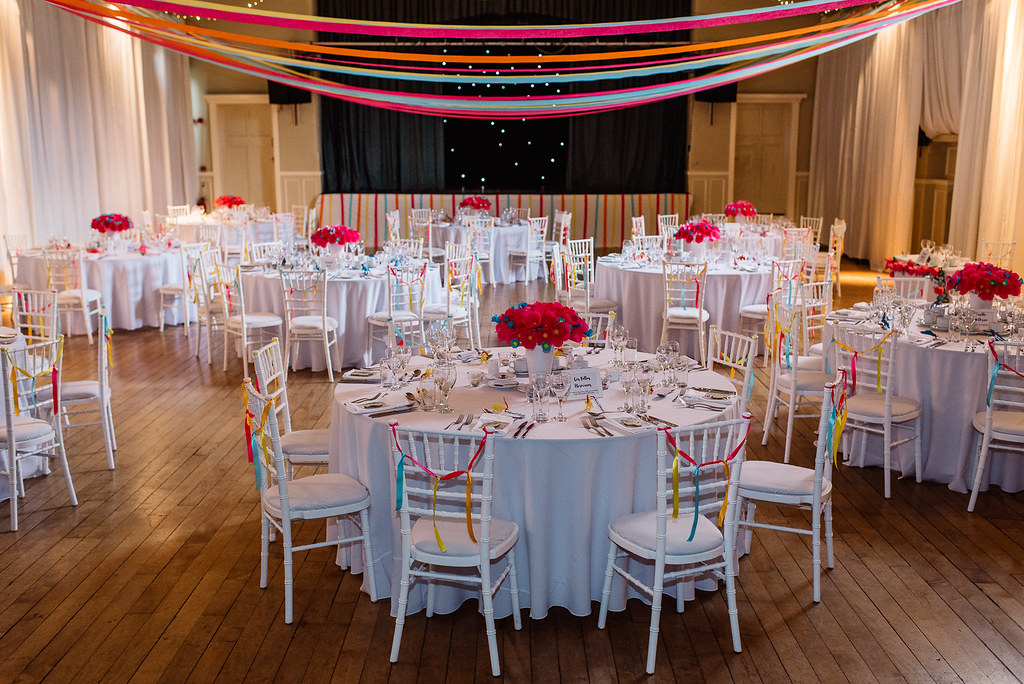 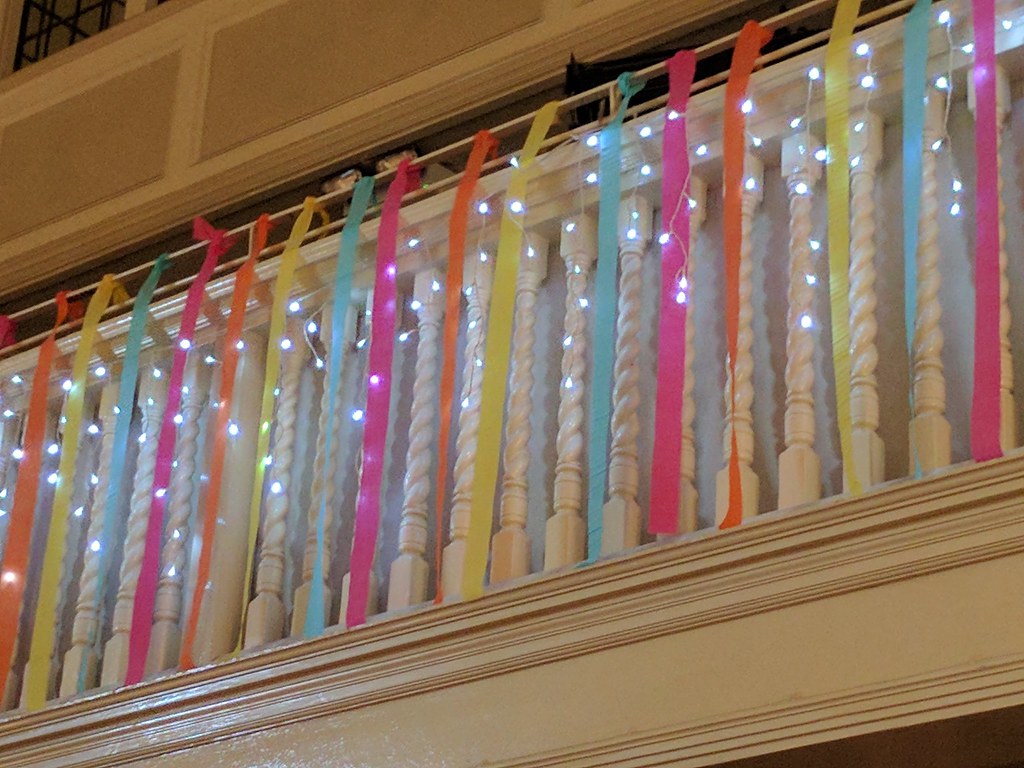 The seating plan was a combo of paper flowers and more ribbon. The actual grate is something  my parents have had lying around for me for years. Look familiar? My dad printed out the table cards on his nice printed and I fixed them on with mini clothes pegs along with some polaroids of Topher and I.

We weren’t sure at first what to call our tables at first but then we decided on locations from nerdy films and programmes we both love. 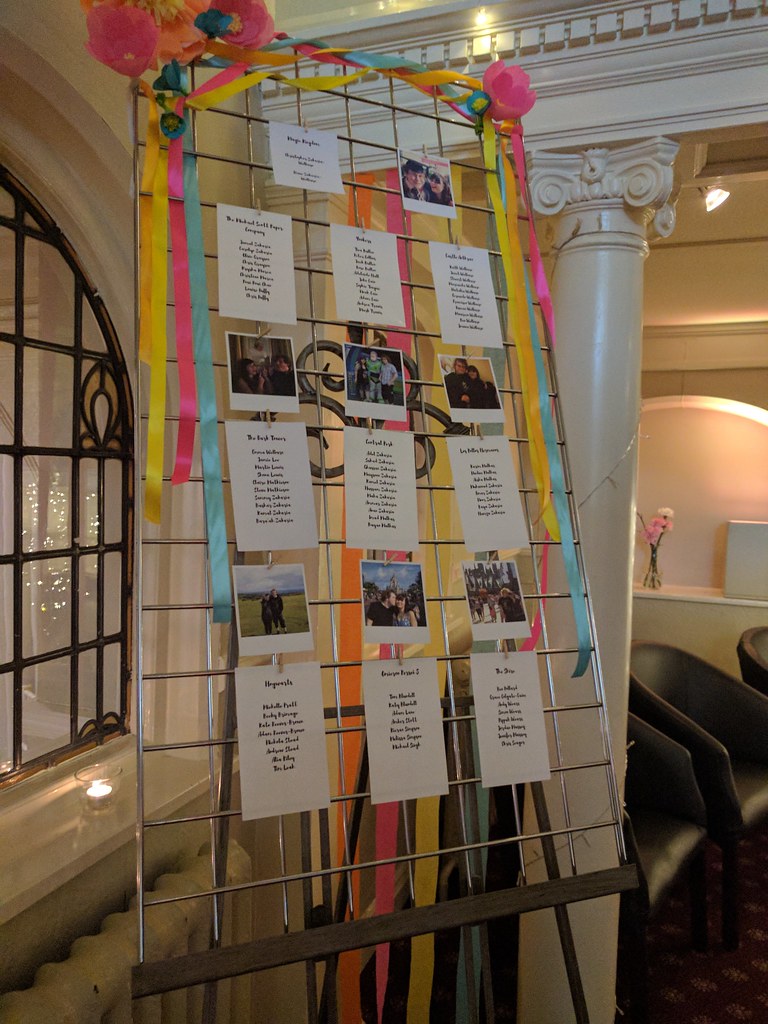 The last little bits of ribbon were used on our cars. Since my parents have nice white BMWs, we decided to use those instead of wasting hundreds on wedding cars. 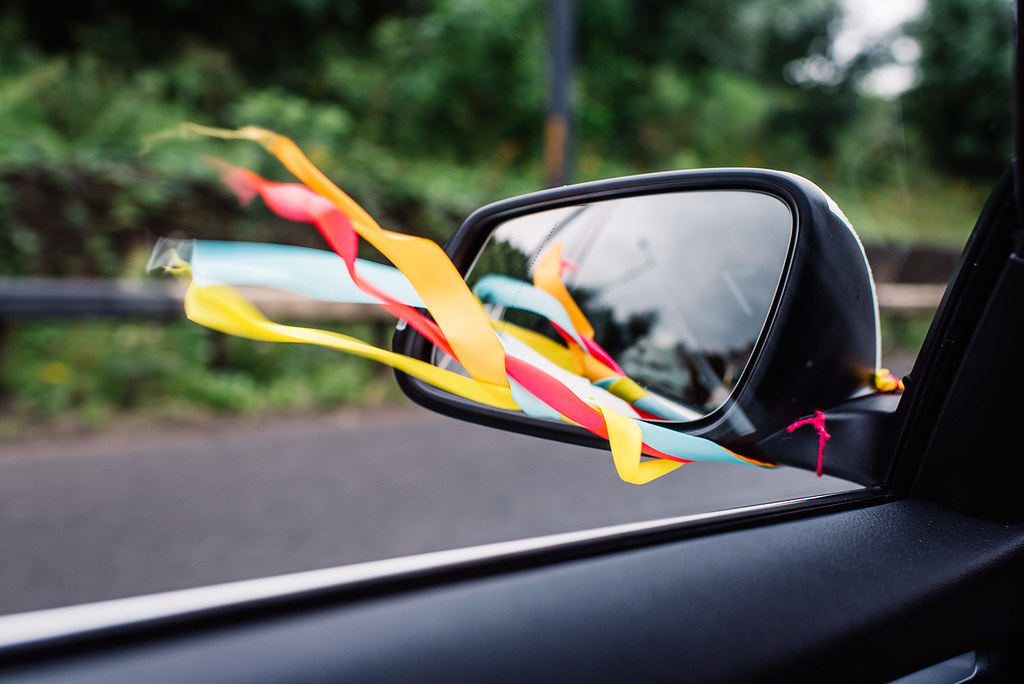 So, onto the tables! 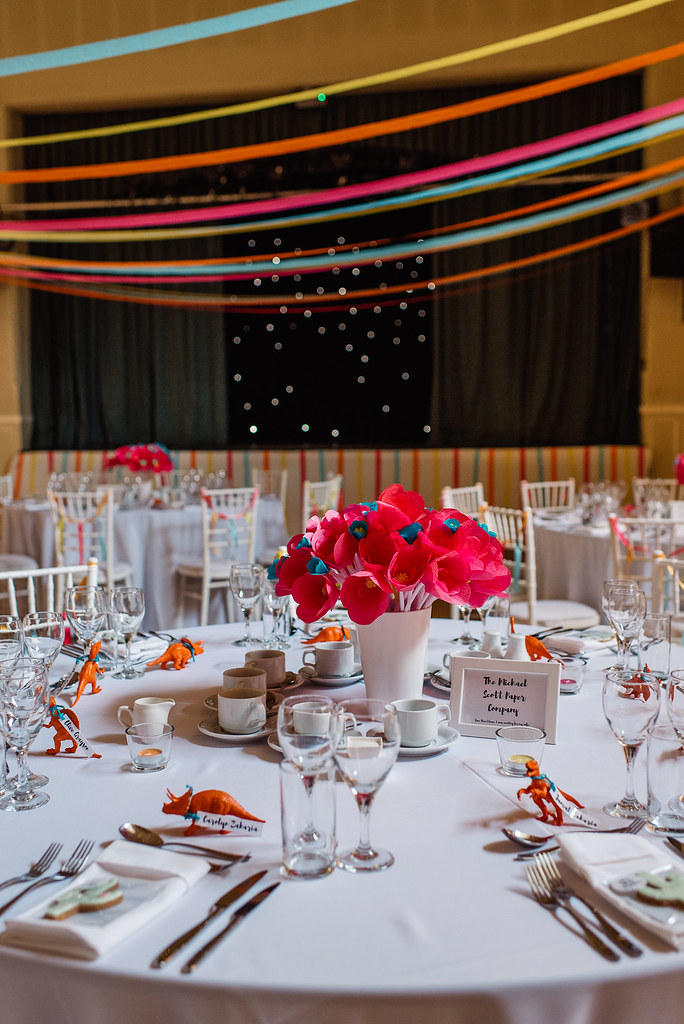 The candles are from Primark and IKEA – we managed to find them in all 4 of our wedding colours. And the tea light holders are also from IKEA.

As I mentioned, we named the tables after locations in nerdy stuff and we added in a romantic quote from each. The frames were from Claire and Steve’s wedding (thanks guys!) so keep in mind if you have friends getting married not long before you that you can use each other’s stuff! 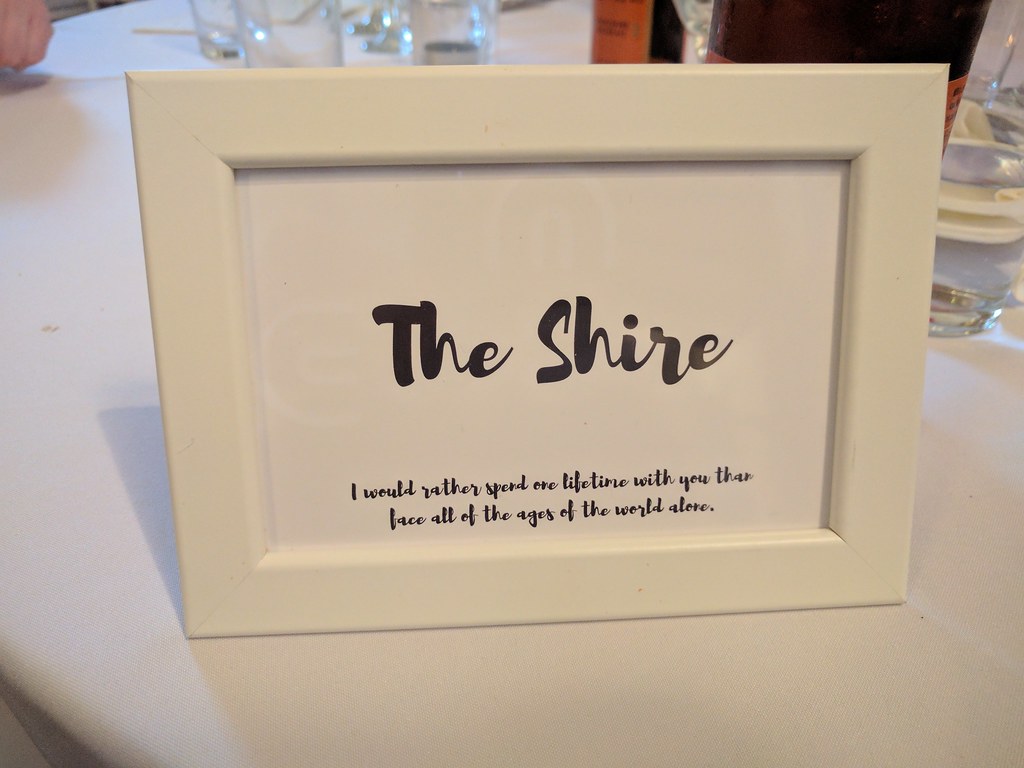 Now, the dinosaurs! People asked us a lot, why dinosaurs? We could only say, “Why not?” So as cool as they look, I had no idea how hard it would be to source the dinosaurs. Either kids aren’t playing with them anymore or they really are and are not willing to sell them. There were so many times when we considered changing them to something else but I’m glad we stuck to our guns. We managed them all in the end and though we might have had a table with some much bigger dinosaurs, I don’t think anyone noticed.

So the plan was to have each table to have all the same coloured dinosaurs on it – I think it would have been just a bit too messy looking if we had just mixed them up. The spray paint was from Hobbycraft again (I lived there this year!) and I had my dad, Claire and Emma help me spray paint them. Then Topher and I tied the names to them in coloured twine. 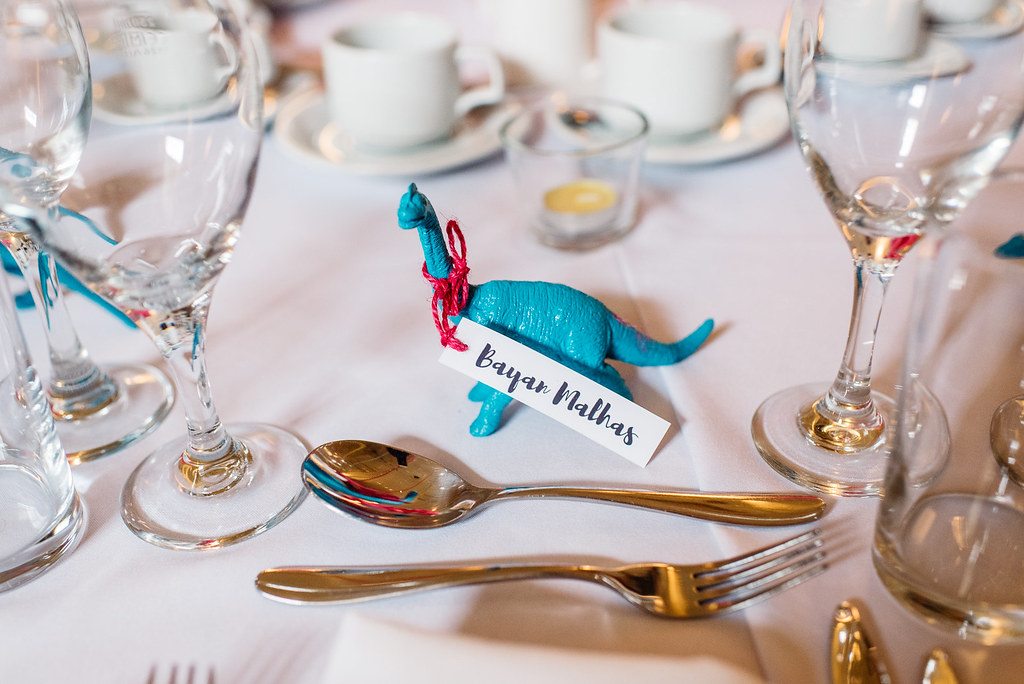 Having been to so many weddings in the last 12 months, I’ve found that edible favours are always a winner so I thought long and hard about what to include. Having been to Blogtacular a month before the wedding, I stumbled across Honeywell Bakes who make the most amazing looking and tasting biscuits. How cute are these? 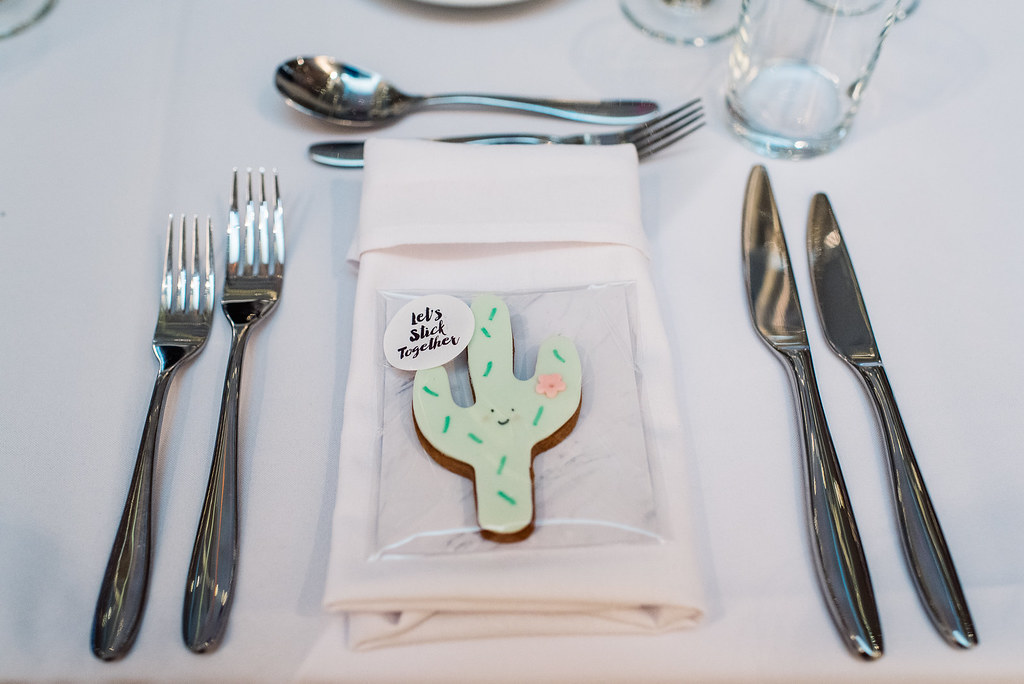 We finished the favours off with a sticker that had Topher’s and my names in Arabic. I think it’s safe to say the biscuits were a hit – not a single one was left behind! 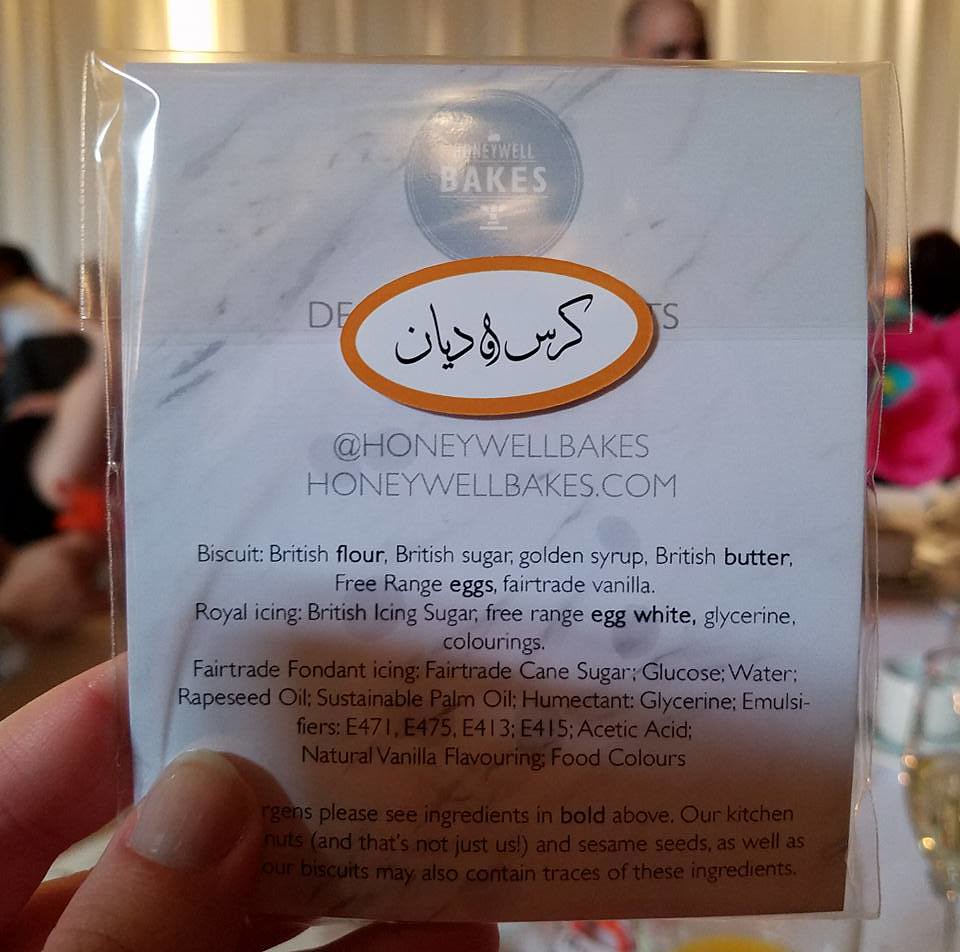 And finally, what’s a wedding without cake? Our wedding cake was made by the super talented Sarah from Pink Cocoa and it was perfect. It looked good and it certainly tasted good too. Since we served it as dessert and also with the evening buffet, there were only a few slices left to take home – it went down a treat. It was chocolate, vanilla and Butterbeer! I always dreamed of a drip cake and she even made our flowers out of sugar.

The cake topper was a combo of eBay and DIY. The Wall-e and Eve models are from eBay and the rest including their accessories and the bunting was made by me. The bunting is actually from hobby craft but I cut off all the little flags and added my own. I think it worked really well. 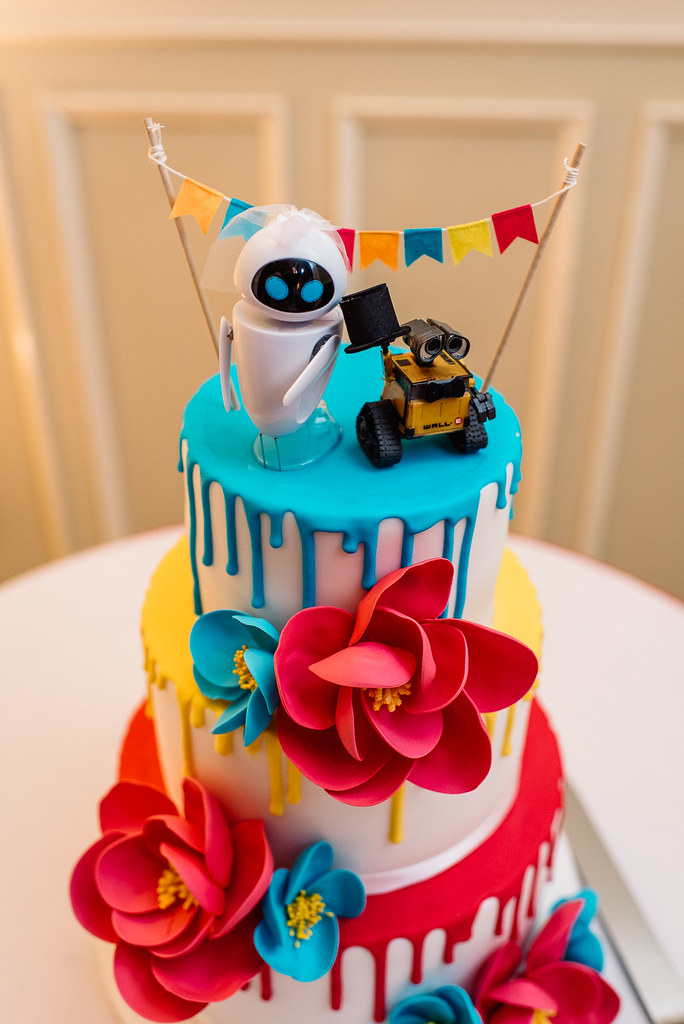 And that’s it – I think I covered everything! 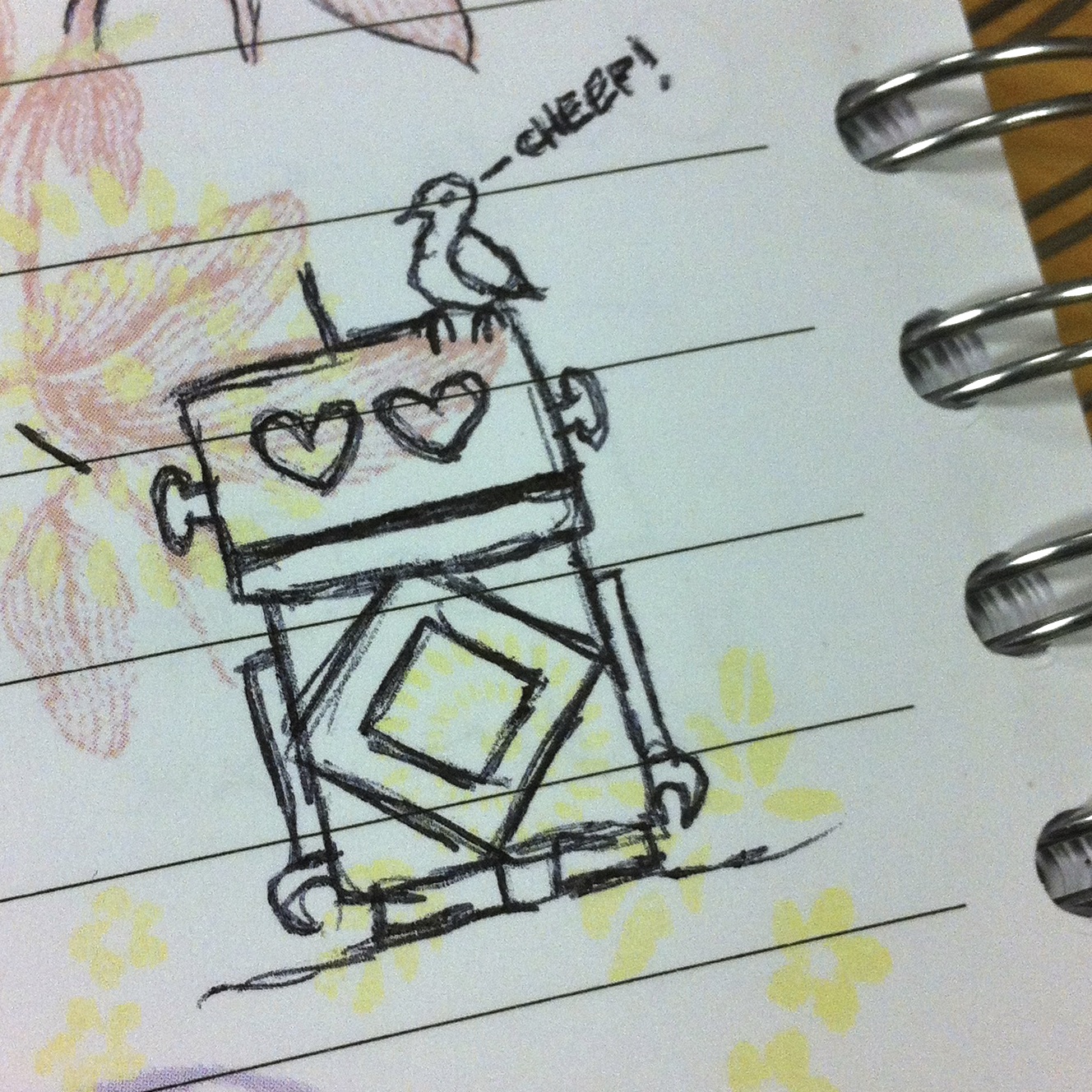 The adventures of Charles the unimpressed robot

Friday Funny: Not sure whether to scream or laugh