The main event was our friends Claire & Steve’s wedding. It was an amazing day. After getting officially married in a registry office last Friday, they had a hand fasting ceremony on the Saturday. I’ve never been to a hand fasting before but it was such a great experience. The ceremony was so personal to them and Topher and I were in tears several times throughout!

A traditional hand fasting produced the phrase, “tie the knot”. The bride and groom are bound by their hands by different bits of ribbon, rope and fabric that special people in their life choose individually and give them a blessing or a wish. Afterwards, they’re untied unlike back in the olden days where they would remain tied for several days! Talk about testing your partnership!

The whole day was so them and I wish them all the happiness in the world. We’ve got another wedding to go to tomorrow which marks wedding number 4 out of the 7 we are going to before our own. Busy busy.

I maintained at Slimming World again.

At first I was super annoyed about it but then I realised it was lucky that I got to stay the same. I had a wedding to go to (which we had to take some leftovers from the buffet home), a mother’s day carvery and I did a review of Jamie’s Italian. So I did pretty well in hindsight. It’s annoying to not lose any weight but it’s a relief to have not put anything on either so I’ll take it.

I think by being so good when I was at home helped balance things out. So since we’ve got another wedding and it’s Topher’s mum’s birthday meal as well this week, I think I should be able to lose 1 pound. Fingers crossed.

We had another meeting at the wedding venue.

It’s starting to get scarily close with only 3 and a half months to go. Still a fair few things to do but I’m getting things ticked off. I bought my wedding shoes so that’s something! And we ironed out a few more details when we were at the venue. The food is all picked out now and we even have a list of timings for the day now. Things are getting real.

We’ve handed out almost all the invitations now so we’ve already had about half of our RSVPs back. Topher can’t wait to do the seating plan. I’m not so excited about that part! But seeing how close things are getting now has made me realise I need to up my flower making so that’s getting done now.

My office is almost finished.

It’s taken a lot longer than I wanted it to but that’s all down to furniture problems. The desks I got for free from my brother turned out to not make the corner desk that I had envisioned so I had to go buy one on Amazon. On the bright side, it’s arrived, I put it up and it looks amazing! I love it so much. My new chair also arrived and that has been put up this week as well.

As for the main stumbling block, I’m still waiting on my bookshelf. It’s from IKEA, won’t fit in my car and it’s not cost effective to get it delivered so we’re trying to coordinate a free day with one of our friends who owns a van. That’s proved difficult so looks like I’ll be waiting a little while longer. As soon as I’ve got it though, the room will be finished as I’ll be able to move all my stuff back inside from the spare room. I can’t wait. 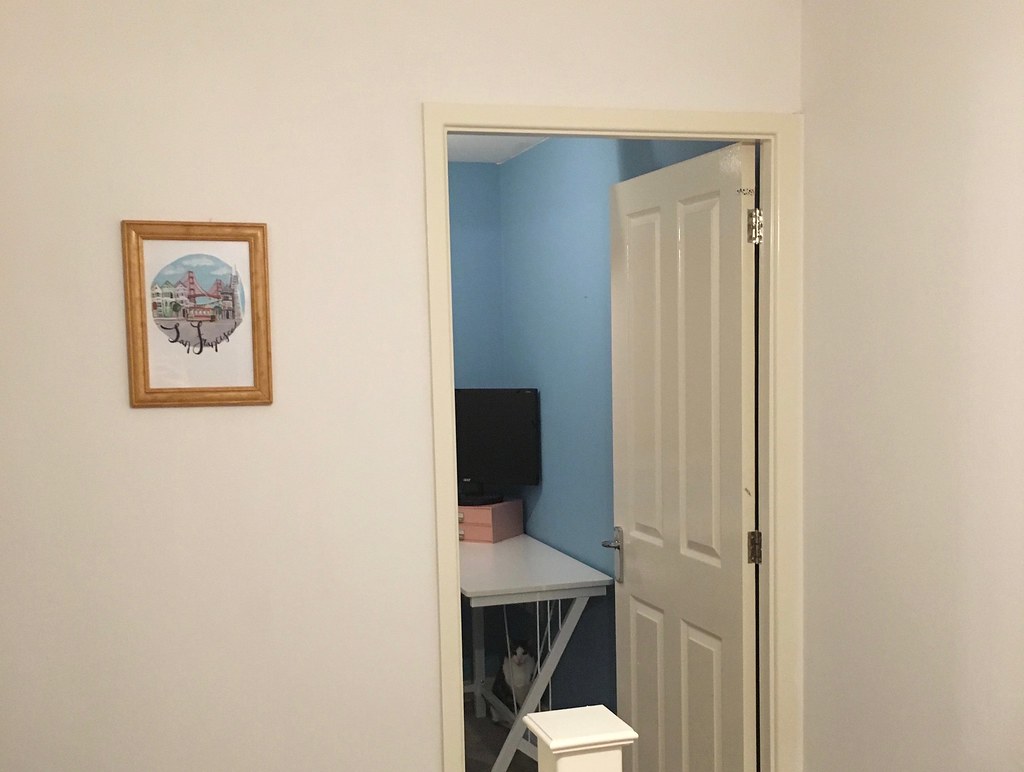